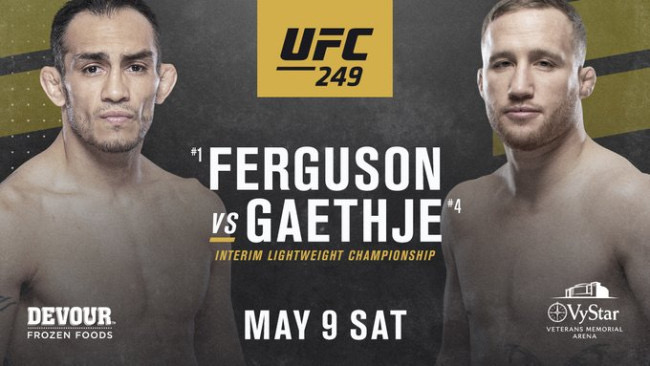 After months of speculation, multiple event cancellations, and hard-to-believe bluster from UFC President Dana White, the UFC is set to pull off what many thought could not be done, as it presents UFC 249 this Saturday, May 9th, from the empty VyStar Veterans Memorial Arena in Jacksonville, Florida and LIVE on ESPN+.  Originally scheduled for April 18th in Brooklyn, NY, the event retains one half of its original main event as Tony “El Cucuy” Ferguson takes on Justin “The Highlight” Gaethje – a replacement for champion Khabib Nurmagomedov – for the interim UFC Lightweight Championship.  The rest of the card features main event-caliber fights and an undercard full of fan favorites and top-15 talent, as one might expect with dozens of fighters sitting on the shelf.  New York Fighting‘s editor Kyle Antonelli and founder Matt Culley are here to take a look at the odds and break down some key matchups ahead of this one-of-a-kind supercard. 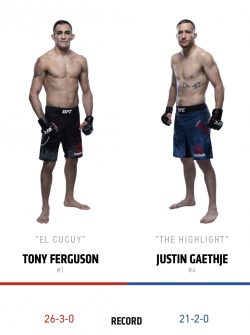 Justin Gaethje presents perhaps the most intriguing, and certainly the most entertaining replacement for the champion Nurmagomedov, currently stuck in Russia, in a fight that has many fans just as interested as the original matchup.  Tony Ferguson was already preparing for a championship fight, and went so far as to make weight in mid-April to demonstrate his readiness.  Of all the fights booked Saturday night, Ferguson vs. Gaethje clearly has the closest odds.  Of course, that doesn’t necessarily mean it will be the closest fight.

Kyle’s Pick:  A 12-fight winning streak in the UFC’s lightweight division is the kind of consistency you can put your money on.  Look for Ferguson to use his versatility, durability, and cardio to take Gaethje into the championship rounds and snag a late submission.

Matt’s Pick: Both fighters possess a variety of skills to inflict damage on their opponent, with the durability to take this fight into later rounds. Ferguson just has more ways to win. I see a bloody choke finish in later rounds – D’arce, RNC or Triangle. 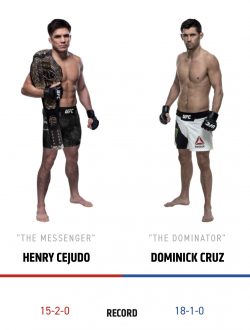 Dominick Cruz picked a hell of an opponent to face in his return from a 3-year absence from competition.  Henry Cejudo is riding a five-fight winning streak, with the last three wins being over pound-for-pound contenders in Demetrious Johnson, T.J. Dillashaw, and Marlon Moraes.  The 2008 freestyle wrestling Olympic gold medalist (have you heard?) grows increasingly impressive with each outing as he eclipses his early reliance on his wrestling and struggles with making weight.  Cejudo’s current incarnation is a braggadocious but disciplined professional, who mixes his striking and wrestling to devastating effect.  Cruz steps in as a replacement for the equally intriguing, and equally outside the title picture, Jose Aldo, coming off a layoff due to arm and shoulder injuries.  His last fight was a humbling loss to Cody Garbrandt at the end of 2016.  His resume is impressive and his star power has grown thanks to his successful side gig as a UFC commentator, but one gets the impression that Cruz sensed an opportunity and jumped on the biggest money fight he could find.

Kyle’s Pick:  Cruz returned from his 2011-14 ACL-induced layoff in shockingly top form, but it is still hard to imagine that we’re going to get the Cruz of old.  Cejudo should be able to out-pressure and out-wrestle the skilled but overmatched Cruz for a decision.

Matt’s Pick: Although I’m a big fan of Dominick Cruz and his fighting abilities, but his style is one that doesn’t age well. Put that against a fighter will the abilities of Cejudo, mixed with a long layoff, my money would be on Cejudo by late TKO or decision. 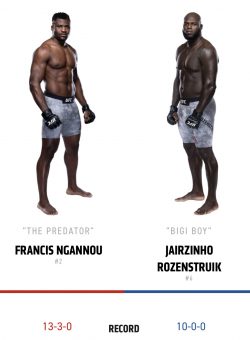 Two of the most fearsome knockout artists in the game collide, as contenders seek to separate themselves from the pack in a Heavyweight title picture muddled by Stipe Miocic’s surgery and willingness to wait, and Daniel Cormier’s eagerness for a trilogy.  Rozenstruik is undefeated at 10-0, and is coming off his best win in a 5th round KO over veteran striker Alistair Overeem.  After a title fight loss to Miocic and an embarrassing clunker of a loss against Derrick Lewis, Ngannou has rebounded back into form with a reprisal of his KO win over Curtis Blaydes, and first-round KOs over former champs Cain Velasquez and Junior Dos Santos.  It is hard to tell from these performances whether he has improved, or just gotten back to his roots, but to his credit, his last three opponents have not been able to put him to the test.

Kyle’s Pick:  In a fight like this, go with the man who has done it more often and against a higher level of competition.  Aside from a couple of duds, Ngannou has laid waste to some of the HW elite and seems to have regained his motivation. Don’t bank on an early KO, but expect Ngannou to get it done in the second.

Matt’s Pick: Its hard to imagine these two heavy handed strikers going the distance, but stranger things have happened (Ngannou vs Lewis). That said, despite Rozenstruik’s recent success, Ngannou’s experience and re-energized focus on his craft leads me to go with him by KO or TKO in rnd 3. 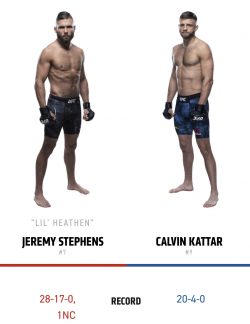 This one is an interesting choice for the main card, but clearly the UFC is prioritizing action fighters as these two featherweights look to rebound from tough losses.  Stephens is a known commodity at this point, being one of the most tenured fighters in the UFC, but does not yet appear shopworn or diminishing in the skills department.  He is still a knockout artist at heart, but has added some sophistication to his striking game over the years under the tutelage of Eric Del Fierro among others.  Kattar is coming off a close decision loss to the highly touted Zabit Magomedsharipov, in which he gave a good account of himself in defeat.  His boxing is far and away his strong suit, but it can carry him a long way as shown in an impressive victory over Shane Burgos.  This one figures to be a war on the feet for as long as it lasts.

Kyle’s Pick:  Kattar has a better jab and has a speed advantage, but Stephens is actually the more versatile fighter in this one, and fighters like Kattar have not given him too much trouble in the past.  Look for Stephens to pull off a mild upset with a decision victory.

Matt’s Pick: This is a classic new vs old talent matchup, with two fighters who bring an extremely exciting fight style to the octagon. Stephens’ has proven in the past that he won’t lay down for anyone as a stepping stone in the featherweight division, so Kattar will have to bring his A-game, including his chin. Look for Kattar to frustrate Stephens with footwork, head movement, and a crisp jab on his way to a decision win. 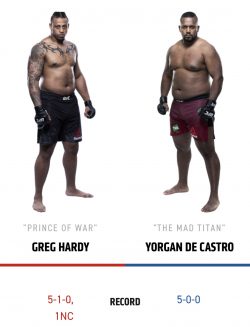 Another head-scratcher makes its way to the main card as the UFC continues to push the controversial ex-NFL defensive end Greg Hardy, despite a surprising lack of buzz.  Hardy has improved from his understandably raw beginnings into a serviceable heavyweight, and hopes to leverage his athleticism and elite coaching to climb the ranks.  His spirited decision loss to the more skilled Alexander Volkov showed that he has the durability to go the distance and take some punishment from the next tier of heavyweights.  After an impressive performance on Dana White’s Contender Series, Yorgan de Castro made the most of his UFC debut with a beautiful knockout over Justin Tafa.  Still, it feels like the UFC is giving Hardy a winnable fight over an inexperienced opponent who is willing to stand and trade.

Kyle’s Pick:  I haven’t seen enough out of de Castro to feel confident in picking him, though his avenue to victory is obvious.  Look for Hardy to land the better strikes en route to a TKO victory.

Matt’s Pick: Hardy by TKO, or a boring decision

Even though these fan favorites are coming off losses, it is a travesty to put this rematch on the prelims.  Little needs to be said about these action fighters.  They are as similar as they are different – both are knockout artists who utilize the full arsenal of strikes, but have very different styles on the feet.  Both are submission artists off their back, but while Cerrone is more willing to employ his underrated wrestling, Pettis is more prone to prolonged grappling exchanges.  Their fist fight in 2013 ended in the first round with Pettis the victor, and it is hard to take much from that fight in handicapping this one.  Expect a wild affair on the feet and on the ground for as long as it lasts.

Kyle’s Pick:  It is a bit cliché to say that it comes down to which veteran has more left in the tank, so I won’t do that here.  I do think that one dynamic still stands out – Pettis performs well in the first round and Cerrone has always been a slow starter.  I love me some Cowboy but I’ll take Pettis in the first.

Matt’s Pick: This fight brings back memories from the good old days of WEC and Tapout. Each fighter has an amazing highlight reel of finishes and huge victories, but both have also had extremely underwhelming performances at times as well. If we see both men bring their full arsenal of excitement and violence, it could be fight of the night, despite being on the same card as Ferguson and Gaethje. This may be wishful thinking in 2020 though, Pettis by decision. 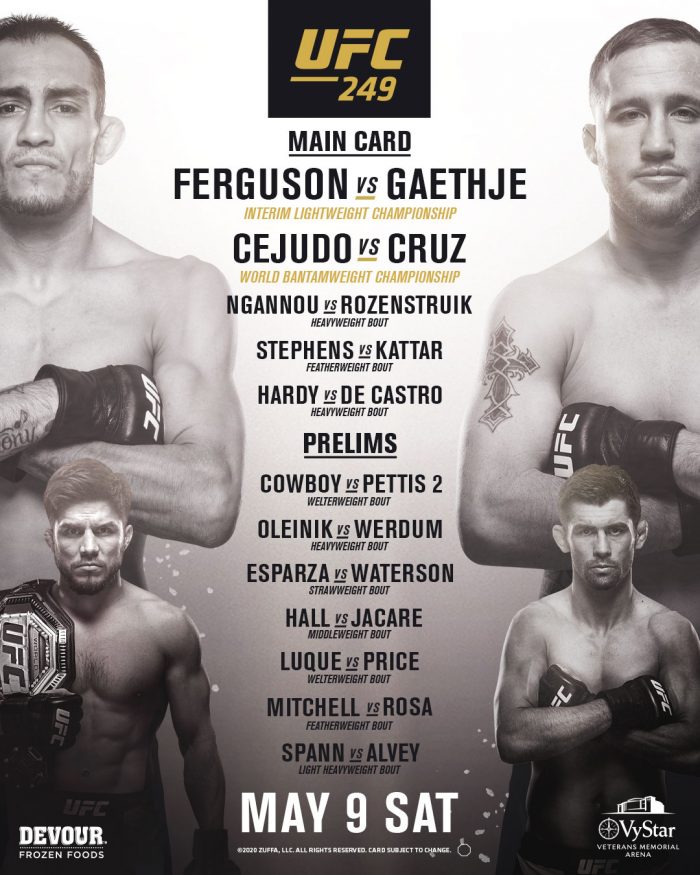