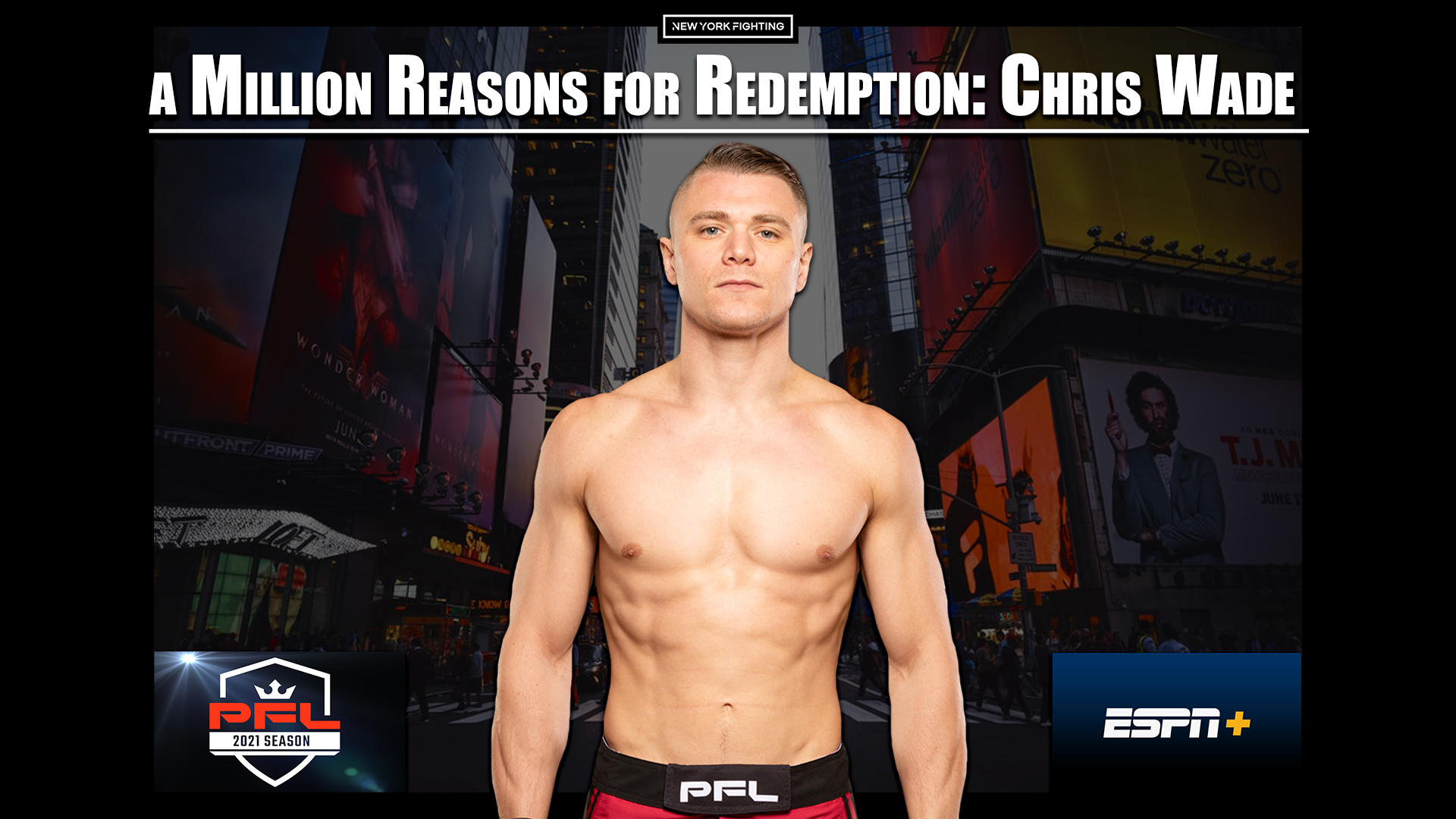 In the age of social media, there are certain moments in time that are so rare, so exciting, so engaging, that they are shared over and over throughout various platforms and channels. Mixed Martial Artist Chris Wade, of Islip, NY, experienced this exactly two seasons ago while competing for the Professional Fighters League, or PFL. Even if you don’t know who Chris is, yet, there’s a good chance you have seen a video clip of him flying through the air with a jumping front kick right after the opening bell. The moment went viral, and now has well over 100 million views. As much as Chris enjoys seeing all the views his aerial assault has garnered, he knows that what really matters now is how he performs in this upcoming season. 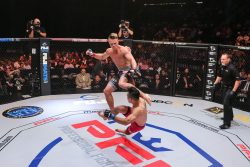 “It’s cool to see all the views it’s gotten and all the big names in our industry that have shared it. It would be nice to get tagged in those posts, maybe grab some followers from it, but it’s still cool to see how far it’s gone. That’s not what’s on my mind now though, we’re here to make new viral videos this season.”

Chris grew up on Long Island, NY and started wrestling in third grade at around 8 or 9 years old. It was just something he did as a child, but by the time he turned 13, it grew on him and became the focus of his young life. He would go on to have a successful high school career at Islip High School, where he was recruited to Binghamton’s Division 1 program. After being team captain for his freshman year, Chris felt the need to return home to Long Island. This led him to wrestle for a strong program at Nassau Community college. He would go one to reach the finals of the Nationals, losing to another young wrestler who would eventually strap on some MMA gloves, named Colby Covington. The following year, Chris did not compete, but stayed involved in the sport as a wrestling coach. After some friends gave Chris a push to return to competition, he signed on to wrestle for Oneonta, a Division 3 school in Upstate New York. Chris would go on to All-American there, but decided to hang up his wrestling shoes after the season and pursue a career in a young, and still emerging sport called MMA. 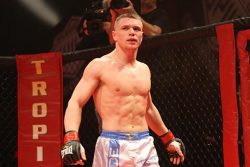 Chris started his training at Bellmore Kickboxing Academy under Joe Panerello and Keith Trimble. There, he was eventually introduced to another young wrestler-turned-fighter named Ryan Laflare. Laflare and his Jiu-Jitsu coach Gregg Depasquale were in the process of opening a gym of their own in Suffolk County, NY at the time called Long Island MMA. This gym, and these relationships, became a vital part of Chris’ career and his success in the sport. Chris started his newfound career in combat by rattling off four quick wins in kickboxing competition and one in amateur MMA before turning pro. His pro career would lead him to success across multiple promotions, putting him in the position to be signed by a new, innovative sports league that debuted in 2018, called the Professional Fighters League.

The PFL is a mixed martial arts promotion that offers its athletes and viewers a unique league format comprised of a regular season, playoffs, and a 1-million-dollar prize for its season winner in each weight class. Athletes from the top gyms from all over the word are chosen to compete and given a chance to change their lives. Along with their original format, the PFL also offers a variety of innovations across multiple aspects of MMA promotion. Partnered with elite sports distribution platform ESPN +, the PFL has emerged as a top tier player in the industry, creating a shift in presentation with in-cage technology, fan based scoring, strong storytelling and more. It is the PFL’s modern approach to digital media and social interaction across platforms that helped to create that viral moment of Chris flying through the air.

As the 2021 PFL season approaches, Chris has put in his time to learn and grow from mistakes he’s made in past seasons, and he looks to take home the 1-million-dollar prize this time.

“I made it to the semis two years in a row. I still think I won that semifinal fight in 2018. I learned a hard lesson about preparation in 2019 though. With two fights in one night, that gap between fights is crucial. You have to stay ready basically, cause the other fights could be quick finishes. That’s what happened last year. As soon as I took my gloves off and was about to lay down to rest with some ice on my back, they came in and said, “it’s time to glove up.”

Chris explained that what he learned most from the experience was that he failed to prepare for all possibilities. Due to rankings and the way the regular seasons matchups had played out, Chris made the mistake of assuming he would meet a certain fighter in the semifinals, should he win his first fight. When that turned out not to be the case, he found himself fighting an opponent he may have wrongly overlooked, and he did not have the gas tank left that he needed for this particular style of fight. 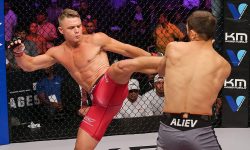 “I was so focused on meeting that one opponent in the semis, that I overlooked the rest of the guys. I also realized I didn’t prepare myself enough for the grueling effects of two fights in one night. I’m ready this season though. We’re gonna break through to the finals and take home a million dollars.”

On April 23, live on ESPN+, Chris Wade returns to the PFL cage for his third consecutive season, but this time it’s in a new division. The Long Island native is set to make his featherweight debut, dropping down to the 145lb division. 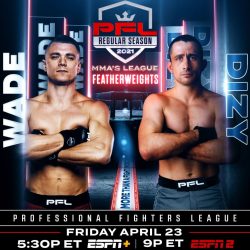 “I’ve never fought at 145 before but I’ve been hearing I should go down to featherweight my whole career. Laflare has always told me I should go down. Even after my first UFC fight, when I won in under a minute, they asked me if I would consider going down to 145 for my next fight. At the time it didn’t make sense for me and my career, but now this opportunity makes sense. I’m not someone who cuts a lot of weight anyway, so with some adjustments it’s definitely doable. I know where I failed myself last year. I’m a different animal endurance-wise now and I’m excited to show the world the best of me. With my size, style, and experience I think I’m a big problem for everyone in the division. That coupled with the chip I have on my shoulder from the last two seasons is a recipe for a championship.” 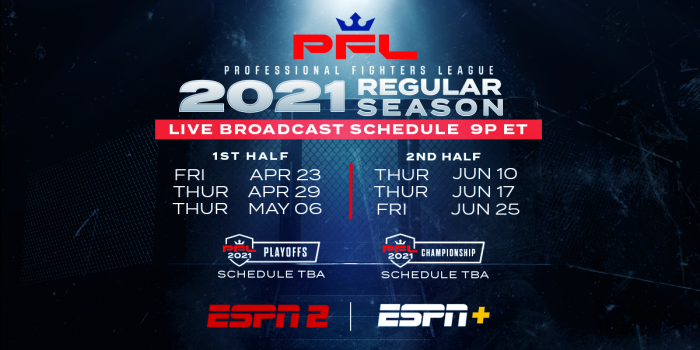