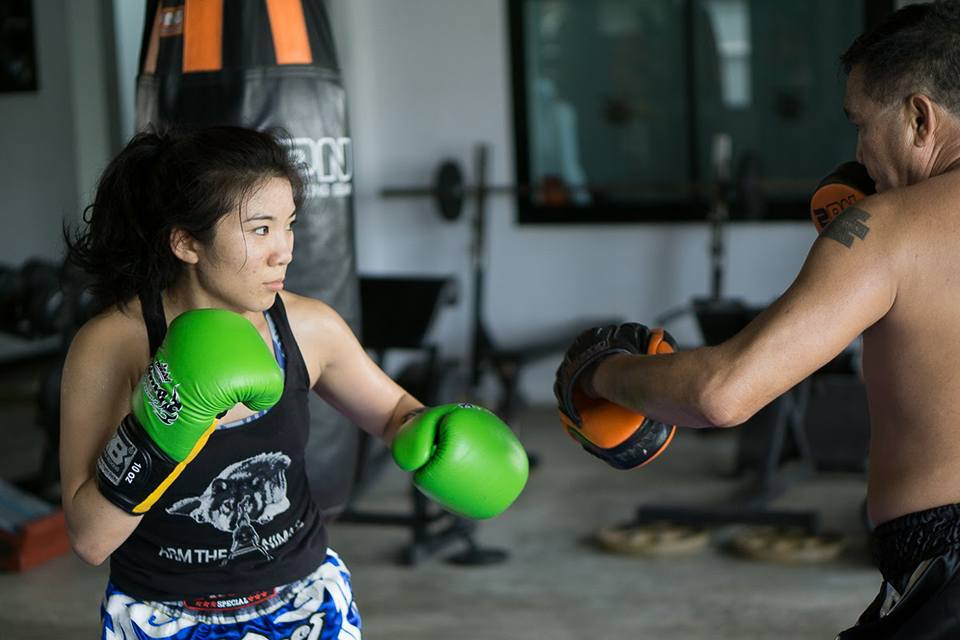 Angela Chang’s face is familiar to many in the New York Muay Thai fight scene. A fighter out of Sitan Gym NY, the athlete has been training for the last four years. Those who know her, miss her–as she’s been living internationally in Thailand for the last year and a half, and hasn’t yet set a date on her return.

“Visiting Bangkok for the first time, I fell in love with Thailand immediately,” Chang says. “The Muay Thai, the food, the people, the attitude, the weather. There was so much to love and my heart was here, even when I went home. I knew I had to make my way back and here I am!” 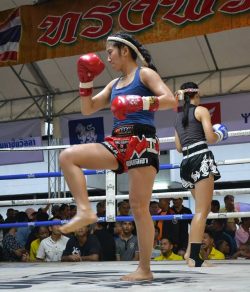 A fighter since 2013, Chang’s interest in Muay Thai began when she was a child, practicing martial arts and watching fighting movies with her father, particularly the film Kickboxer with Jean Claude Van Damme.

“It sealed the deal for me–I wanted to do something just like that. Fast forward a few years, I learn that wasn’t Muay Thai at all!” Chang laughs.

Her first experience in the realm of Muay Thai was at a gym with coaches Omar Estevez and Rudy Felix. Chang wanted to compete, and Coach Estevez recommend Sitan as a good place for her to go. Chang met head coach and owner Aziz Nabih, and the rest is history. 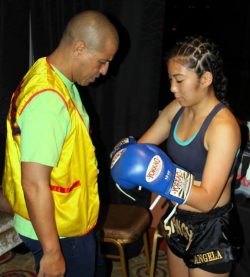 “Something I’ve come to be extremely grateful for is how Aziz and our other trainers never let us take the easy way out, so those who have trained at Sitan for a while don’t see any other way to do things, which is a GREAT thing!” Chang says. “Being at Sitan is amazing and Aziz has an amazing eye. He’s able to make the smallest adjustments and it makes all the difference. He trains all of us, even the non-fighters, with good technique, so there is something for everyone within the same class. Modafinil http://buymodafinil.org/where-to-buy-modafinil-online.When I started at Sitan, I used to get beat up by literally everyone, even people who had only been training for a few months. I got frustrated, but it motivated me to get better and keep training. When I was in fight camp, sometimes it would break me down so much mentally and physically that I felt like I was going to pass out. Sometimes I even cried while getting sharktanked, completely embarassing myself. But after getting through each session in fight camp, I realized that I did it and there was no reason why I couldn’t do another day. Or another after that. I kept reminding myself that without struggle, there is no progress. And all I ever wanted was to get better. Sitan is like another home to me, and everyone there is like family.” 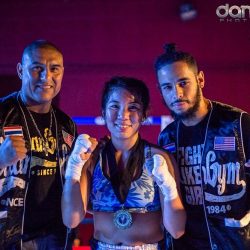 While missing Sitan, Chang has been making a lot of strides in Thailand. She has not only been chronicling her time there, but has been working on bringing attention to the female fighters that sweat, bleed, and cry to compete. She created a website called Muay Ying, as well as maintains an Instagram and Facebook page to highlight these women’s contributions to the sport of Muay Thai.

“Most Muay Thai news outlets only talk about the male fighters and like in almost every other sport, it seems like only the male fighters get the spotlight. Subsequently, a lot of fans only care about the male fighters,” Chang notes. “But being in Thailand, I’ve watched, met, and know of plenty of female fighters that are just as exciting and just as talented and skilled. Cheap Modafinil http://buyprovigilcheap.com/buy-modafinil/.There’s no reason why they shouldn’t have news covered on them. Being a female fighter myself, I really wanted to read more relateable news and with Muay Ying, I strive to bring just that. I collect information and sometimes attend events that have female fights. I will write a post about an upcoming fight so people are aware of it, and do my best to get videos so people can see for themselves how talented these fighters are.” 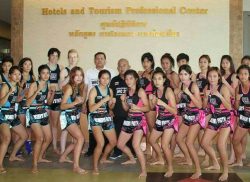 Chang recognizes that being a part of the Muay Thai community has changed her completely. “I’ve learned that you don’t need to rush for everything,” she says. “Some things will come into place in their own time. I started the sport as someone who was both going through a tough time and someone looking to grow in a different way. Muay Thai has given me therapy, strength, and everlasting friendships. A lot of things in my life happened or were made possible because of Muay Thai, whether directly or indirectly. I think my biggest change is my craving for knowledge. I’ve always been someone who was curious, but now I have something that I know I’m never going to be perfect at, and that’s okay. It’s rewarding to just train and see small things improving little by little. From day one, I supported myself the most. None of my friends at the time nor my family members saw the appeal of wanting to train or physically exert oneself to the point of exhaustion. Over time, I’ve met people in the sport that have supported me in so many ways. They believe in me even when I forget to believe in myself. This includes my trainers, close friends, and now my parents are even coming around!” 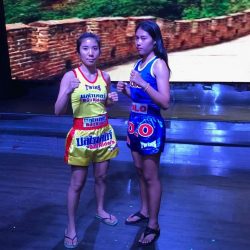 The fighter is striving to leave something behind for other women to follow–whether it is through her own fighting career or through the articles she posts online, it all makes it easier for others to put gloves on and get into the ring.

“Don’t judge a book by its cover,” Chang says firmly. “I can’t even tell you how many times people have doubted me because I’m female or because I’m smaller than them. Females are just as capable, if not more, than males to excel at this sport. If you are a female fighter, you need to keep pushing for your talent to take stage and give extra support to your female teammates. If you are male, keep in mind that the sport is can only be as strong as its disadvantaged population. If you support females on the up, everyone else will benefit from it as well. Muay Thai is an inclusive community, and let’s never forget that.” 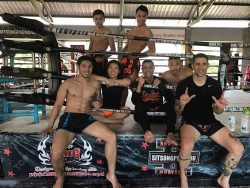