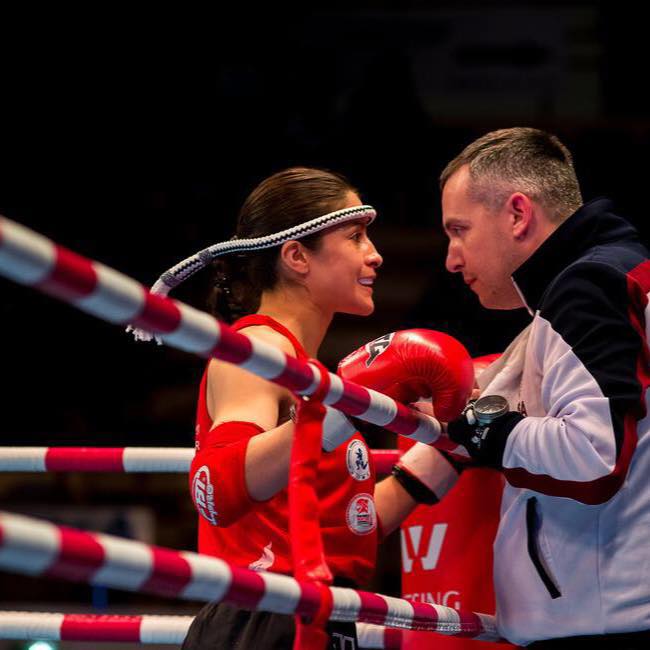 It was a relatively warm day in April in New York City while women were sweating and packed together on the second floor of Evolution Muay Thai. They were doing a round-robin of sparring, while the fighter hosting the event, Raquel Harris, oversaw that each woman was comfortable in-between rounds. Harris had been working towards an inter-city sparring session for female fighters over the last several months, and fighters from the corners of lower Manhattan to the realms of Brooklyn were present. One woman however, had travelled from much further out than the G or A train could’ve brought her, and was patiently waiting in a corner on the blue mats as Harris looked to match her up with another partner. 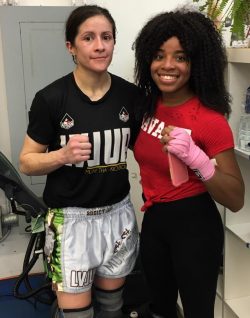 Erin Jimenez had came all the way from Maryland and was preparing for one of the biggest tournaments of her life, the IFMA international tournament that was to be held in Belarus.

A student under Jason Farrell of Level Up Boxing, the fighter had more than twenty fights under her belt and had been training since 2010. As Harris made the introductions earlier in the afternoon about each fighter’s gym and record, when she spoke about Jimenez, Jimenez stood quietly and smiled shyly as her accolades were rattled off. The grand scale of her accomplishments hit the room as Harris noted that Jimenez would be leaving with the U.S. Muaythai Federation team and would be competing in the equivalent of the Muay Thai Olympics. Jimenez nodded towards the other fighters in the room and then dived into training, remaining observant as she studied her sparring partners in preparation for all that would come in a few short weeks. 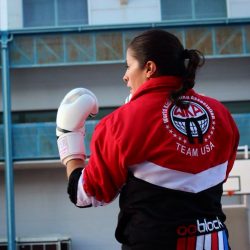 Jimenez and the U.S. team were incredibly successful at IFMA–she and Florida Kickboxing Academy’s Emilio Pineda brought home silver medals, while Boxing Works’ Janet Todd returned with bronze. Their triumphs were critical to elevating the United States’ international standing in Muay Thai, something the USMF has been working diligently towards. USMF President Michael Corley notes, “We are doing everything we can across the U.S. to bring our team to the top of the ranks internationally, starting by working off the same rule set and understanding at our tournaments and encouraging all coaches and referees to become USMF referee-certified. This way, we are all working on the same page and when we bring our fighters outside of the U.S., they won’t be in an environment they haven’t seen before.”

In just another week, Jimenez will once again go with the USMF team and compete in the Pan-Ams in Mexico City, another IFMA-Muay Thai rules tournament. For all her victories, she never expected the success she has had as a Muay Thai fighter and coach. The 32-year-old competitor had a desire to fight since she was 15–boxing, that is–but was encouraged by her mother to focus on her education and go to school. Ever the ultimate student, Jimenez graduated with her PhD in Biology and works in a laboratory as a postdoctoral fellow. When she’s not in the gym training, she’s at work doing science experiments, using animals models to understand human diseases. 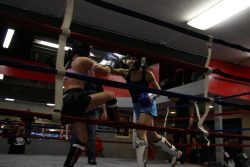 “I love what it I do,” Jimenez says with a laugh. “I love my work and I love training. Muay Thai was my first sport–I never played sports as a kid. I didn’t have time for it or the money. But I grew up watching boxing and always wanted to do it. I didn’t hear about Muay Thai until my twenties and I fell into it because I had my own time, my own car, and wanted to be productive outside of the lab. I fell in love with the sport and fighting came naturally to me. I feel like I’m always thinking, always analyzing–from one lab to the next. Here I am now, seven years later, still not expecting everything that continues to come my way.” 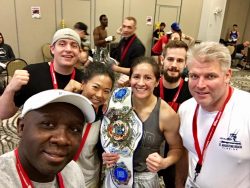 Jimenez originally started training at MMA gyms but followed Coach Farrell when he created Level Up. Jimenez admired the attention and care that Farrell gives to his Muay Thai program and appreciated the culture that was developed in his gym.

“There’s a sense of community here and a sincere respect, a feeling of family,” Jimenez says. “Jason goes out of his way to make us feel special and cared for.” Now Jimenez is a coach at their gym and has become one of the more experienced fighters, with a current record of 15-8. She looks to take the other female fighters under her wing and encourages them to be their best. However, she firmly states that she is the same as everyone else that walks through Level Up’s doors. 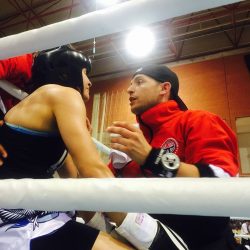 “Just because I fought more than the average person doesn’t mean anything. It doesn’t make me more or them less. We are equal,” she states. “I care a lot about my female training partners and I really want to help get them better. Sometimes I am hesitant with them, like I am afraid to hit them hard or hurt them–even though I know that it’s what we all need to get better. In a weird way, sometimes I feel guilty or bad for hitting or hurting another woman in training. Especially if I have more experience, there’s a strange level of shame that comes with that. However, I know that we train with control, and that if we as female fighters want to improve, we have to start by pushing each other. I try to be my best every time, not just for me, but for them as well.” 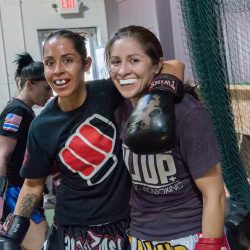 Coach Farrell agrees. “She leads by example,” he says about Jimenez. “After all she’s accomplished, she doesn’t ask or expect special treatment. She still comes to all the classes to learn and constantly does everything she can to improve.”

“I think I’m very quiet and it can be hard to separate being a coach from being a fighter, so I have to take these things into account when I want to encourage others,” Jimenez says. “I usually keep to myself and am focused, but it’s important to me to respect others and look out for my teammates. I think people think women are supposed to be super sweet but when I’m training, I’m focused. I’ve been called a soldier before, but it’s about not getting distracted, not caring what people think about me, and really focusing on training. If I want to continue competing at a high level, then I need to train and focus at a high level. Because of my focus, I consider myself a Type-A kind of fighter. But Jason keeps a very playful gym, and is incredibly positive. It’s important to have fun in training. It’s not a job to get done, it’s supposed to be self-enriching. He is always making sure we are relaxed when we are training, which helps us all get better.” 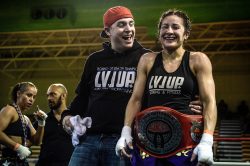 As far as her crazy competitive year has gone, Jimenez is only looking forward to the next adventure. She went to IFMA one year earlier than she had originally intended, as she was selected by the USMF board members. They had watched her bout versus Kate Cottone earlier in the year at Warrior’s Cup, where Cottone came with a vicious elbow that dropped Jimenez into the ropes instantly–only for Jimenez to jump back up and continue the fight. The USMF admired her heart and fighting spirit, and offered her the spot on the U.S. team. Cottone and Jimenez reunited in Belarus, this time as teammates and friends.

Cottone says, “When I found out we were fighting each other, I was excited for the challenge. I obviously knew of her and her fighting career so I couldn’t wait to share the ring with her. I’ve always said I want to prove my worth and I knew Erin would be a tough fight. I had respected her before, during, and after the fight, so when I found out we were both on USMF, I was happy to get the opportunity to know her personally. I felt like we built a bond in Belarus.”

Jimenez trained for IFMA the way she does for any fight, as if they were the World Championships. A difficult factor of the tournament was the fact that the fighters needed to weigh-in every single day, not giving them much time to recuperate after their last fight, as they’d have to go through cutting weight all over again for the next day. However, Jimenez felt as though she thrived, despite the circumstances and the pressure of representing the United States. Now she is looking to do the same in Mexico City.

“If I train hard, I have more belief in my hard work,” she says. “Women bring a different kind of intensity for their fights. I feel like they put everything on the line and want to win more than anyone else. It takes a special kind of person to want to punch and kick and spar. As females, we aren’t really raised to do that. You have to be gritty. I want this not just for me, but to show everyone what women are capable of. As a Mexican-American woman, I grew up just watching boxing–and that’s it. My parents wanted me to have my career. I am in the first person in my family to go to college. I come from a single-parent household. My mom worked very hard to raise us and wanted myself and my sisters to have a good future. She just wanted me to study, work hard, and have a secure career. I believe I’ve accomplished that and now I’m ready to do even more, to push myself and other women even further than we’ve been before.” 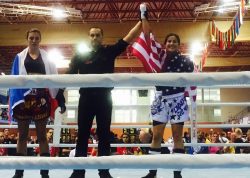