If you were to ask the Irish Grace Aveen what was her biggest accomplishment this year, she’d tell you it was when she stepped into the ring at the world’s biggest stage to fight on Triumph Kombat’s Full Rules Muay Thai bout. While the fight did not go her way, it was an experience that she was beyond grateful for.

“That fight was literally a dream come true,” Grace says, “I went to Madison Square Garden for the MMA fights on New Year’s Eve and I said I was going to fight in that same room someday. I thought it would be years from now, but the opportunity arose only months later. It’s such a blessing to be able to get there. There were so many great fighters on such a high level on that card, so I felt honored to be right there with them.”

To an outsider, the tall, fit, lean, blonde-haired and blue-eyed beauty must have it all. However, Aveen has had a journey that was anything but simple.

“I suffered severely from depression and alcoholism,” she states, almost as if saying she had the flu or broke her leg. Grace’s infectious and bubbly personality shines through even as she reflects on her darkest times. The athlete moved to New York City from Ireland five years ago and in her early months of adjusting to America, she made sure to party hard and to party often.

Aveen recalls, “I went out nearly every night, drank until I got sick, and then forced myself to go to work. I had a corporate job and was a bartender as well. I had moved to the States alone and didn’t have much time to really plan my goodbye from my hometown. I was unhappy, but I thought that was what my life had to look like. I was only 22 and didn’t know much better, it was easier chasing my feelings with a drink than to face them head-on.”

By chance of an online coupon to a martial arts academy, Aveen found the sport that would change her life.

“I always knew I wanted to do some kind of fighting so I felt right at home right away. I liked how fast-paced it was and how I could lose myself in the training. I loved the intensity of it and what I learned from others.”

Four and a half years later, the fighter has completely transformed herself. No longer drinking or smoking, she is now a personal trainer that coaches both adults and children. In the last year alone, she has fought a whopping seven times, holding a record of 4-3. 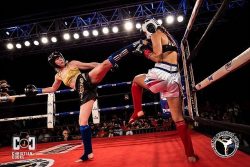 “It’s only been within the year that I’ve started fighting,” Aveen says. “Somehow things didn’t always go in my favor before that, but now that I am actually competing, I’d like to fight as often as I can to gain the experience and just get better. More than anything, I am addicted to this martial art. When I’m not training, I feel myself get down and need to get back in it to feel better again. It’s been two years since I’ve felt truly depressed. Trying to be a better fighter is what encouraged me to stop doing the negative things, because they would only hold me back. It gave me something positive to focus on and something beautiful to build.”

Now fighting under Evolution Muay Thai, which has produced such fighters such as UFC strawweight Angela Hill, Aveen strives to rebuild herself and be the best version of herself. While the road has been rocky and sometimes inconsistent, she’s eager to build a new start. 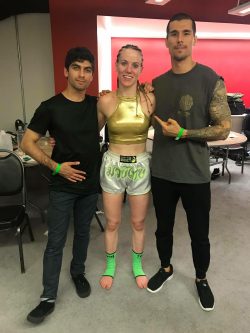 She says almost shyly, “I’m looking into getting into MMA before the end of this year. I do Muay Thai and Brazilian JiuJitsu and have been learning how to put things together. One day I might be doing it at The Garden as a professional, because in this life you never know what can happen! At the end of the day, I listen to my coach Brandon Levi and what he believes is best for me. I want to really earn my opportunities and prove why I deserve to be in the ring.”

More than just about improving her record, the athlete looks to fight the stigma of depression and suicide.

“A big part of training is really good for the mood and your lifestyle, you’re less likely to be drinking or doing drugs,” Aveen says from her experience. “As a female fighter, I think everyone in Ireland should be doing some kind of training because it’s just good for you. It would be a happier world if people stopped trying to damage their bodies and tried to improve them.”

Coming from the lifestyle that she had before, where she was always squabbling with friends and often was hospitalized for alcohol-related illnesses, Grace finds herself to be a whole new person.

She says, “One of the best decisions of my life was walking into a Muay Thai gym. People who suffer depression–it can be as easy as changing your lifestyle and diet. You have so much more power than you think, you do not need to live life in sadness. There is always hope. You also have that amazing community of people around you, who have been through similar things. We all have mutual respect for each other’s journeys. You can be friends with anyone in the Muay Thai community anywhere because of that and know they will always be there for you.” 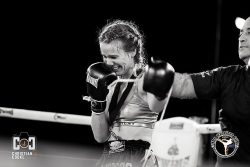 The meaning of the word Grace has many definitions, but is often taken to mean having an elegant poise or demeanor, being courteous, and receiving salvation from the universe. In Grace Aveen, no name would ever suit her better. Friendly and humble, extraordinarily enthusiastic, and a champion for all people’s success (including her opponents), she has exemplified the power of one’s determination to live a better life. Every time she puts on the gloves, she only focuses on her gratitude.

With a cheerful laugh, Grace states, “When people ask me why do I fight, my only answer is that it’s was what I am supposed to do. Everyone has a purpose and I never could figure out what mine was. Once I started fighting, I realized–this is my purpose. This is what I’m meant to do. This is the person I am intended to be and I’ve never been happier.”