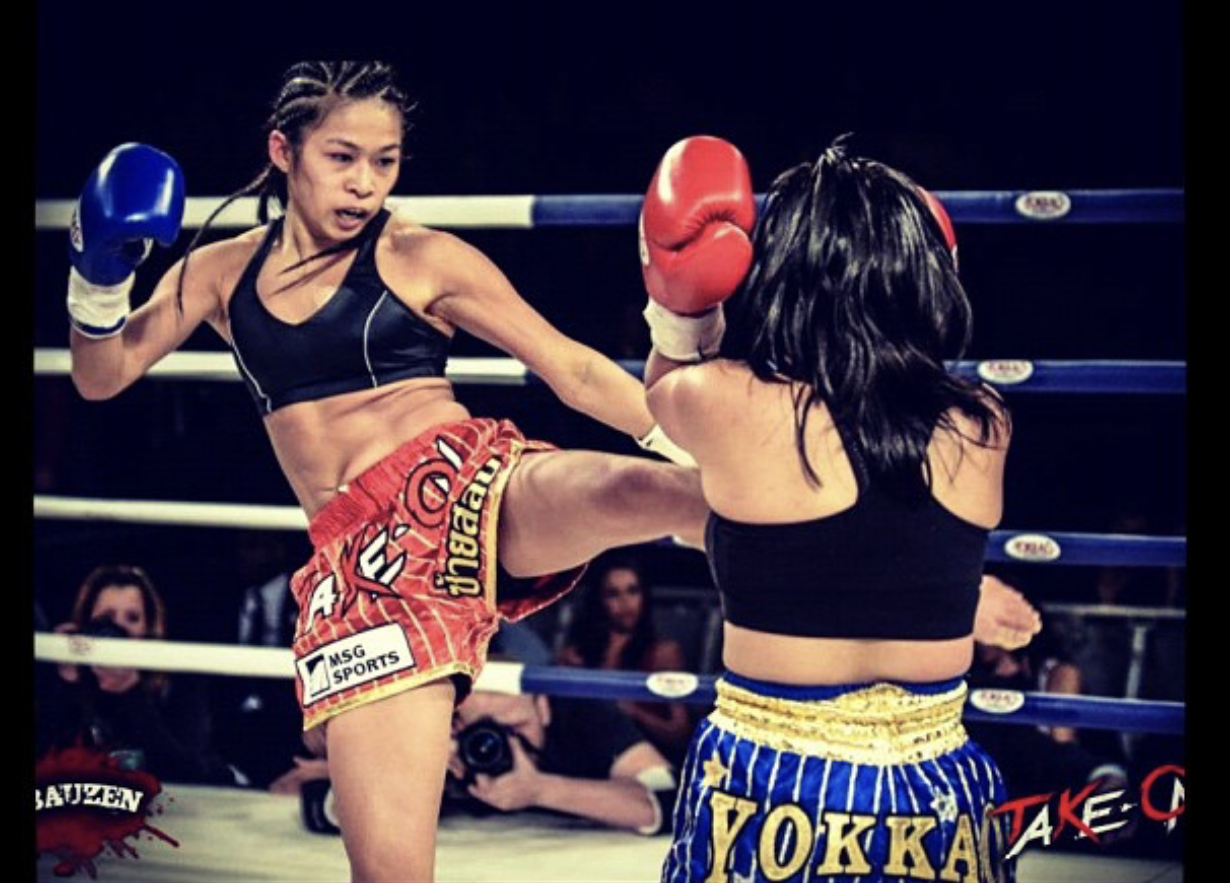 The Muay Thai community in NYC is a tight-knit one. Several coaches amongst the many gyms across the city had started their career in the sport by training together and are happily reunited with their former teammates when they bring their students to fight one another. More often than not, opponents become friends. Differing teams stand together and raise each other up in times of tragedy. It becomes more than just a competitive outlet–for many, no matter what school name is on their shorts–it has become a true family.

As the sport continues to grow and develop, sprawling within the five boroughs, social media has become another way to connect practitioners that only would’ve have seen each other a few times a year. One fighter in particular, while definitely a veteran in the sport, is known by many by just her fight name: “Southpaw Jess”. As more women enter the fighting world and look for role models, Southpaw Jess (or her real name, Jessica Ng) is someone that they refer to and can learn from. Training since 2007 with a record of 12-4 under her belt, the experienced fighter is onto her next challenge. She will be representing the United States at the Pan-Ams this weekend, but the born-and-raised Queens girl has all of New York City behind her. 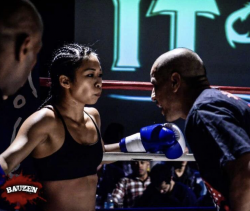 Ng originally began training at Fighthouse, where she met other well-known Muay Thai fighters such as Brandon Levi, Dave Moy, and Elijah Clark; fighters who’d go on to own or coach at Evolution Muay Thai, King’s Combat Fitness, and Renzo Gracie Academy, respectively.

“It was a great experience being there,” Ng says. “I was referred by my friend to try it and I loved it right away, it was something I had never done before. I was about 21 or 22, studying these crazy long hours at FIT, and I just fell completely into it. I wanted to challenge myself and just improve as a person. Elijah was someone who took me under their wing and helped me so much, and being around the other guys was a lot of fun. There weren’t many women at that time but I had strong female fighters like Florina Petcu and Valentina Shevchenko to look up to.”

After a trip to Thailand, she returned to the city to find that Fighthouse disbanded and went in search of a new gym. The convenience of Sitan’s proximity to her home helped her decide to try training there, but her first experience with head coach Aziz Nabih is what urged her to stay. 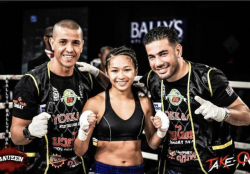 “It’s a little tough being a southpaw,” she says with a slight laugh. “It can be hard for people to train with you and to be honest, it’s even hard for me to train with other southpaws. But with Aziz, it was different. He was very focused. He has a lot of experience training southpaws. The way he held pads for me was so different and he coached me in such a different way, but it worked. We clicked that first day, which was about 8 years ago. I’ve been there ever since.”

Southpaw Jess considers being a part of Sitan as a huge aspect of her life. “Even though it’s a one-man sport, you can’t possibly do it without the team behind you,” she says. “You have to get through it and you know you have everyone’s support behind you. I don’t ever want to disappoint them. The more Aziz believes in me, the more I believe in myself.”

While Ng’s first fight was 7 years ago against Sylvie von Duuglas-Ittu, things have changed dramatically since then.

“It was so difficult to get fights for my weight class, because there weren’t many women fighting in general,” Ng recalls. “We fought without gear and as soon as the bell rang, I was in tunnel vision. Sylvie won by decision that night and I’d go on to win our rematch two years later, but I am so thankful for her giving me those opportunities, especially since it was incredibly difficult to match me with other fighters.” 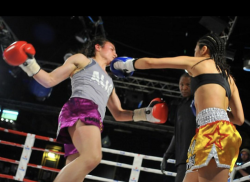 After that night, Ng was eager to get back into the gym and start training again.

“It was hard but mentally I had it in my head, so I let my body keep going,” she states firmly. “I trained so hard and I lost, and it just made me want to improve. I wanted to win for myself. I’m my worst critic and I get in my head about what I didn’t do well, even when I win. There’s always something I need to work on, something I want to perfect, so I’m always itching to make it better.”

Now, the fighter is in Mexico City with the U.S. team, ready to tackle the world. It’s not her first time fighting outside the States, as she previously fought in 2014 in Malaysia in the World Championships. The USMF committee selected her again to compete at 45 kilos and Ng is eager to fight women her own size and weight.

“I was always the smaller fighter, even at the weight class of 105 lbs,” she says. “I’d come in under, like at 102 lbs, and would spend most of my camp just trying to gain weight. Now it’s going to be interesting to see what other women around the world look like and how they fight.” 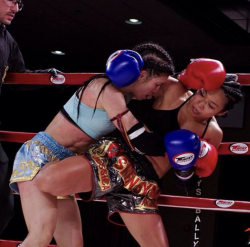 “I feel like I got really lucky that I get to fight along these big names and these talented fighters,” Ng says almost shyly. “I feel so flattered and honored to be along these names, people I’ve been hearing about for years. I’ve been training and doing as much as I can while balancing a corporate job, running on the weekends and making things work. I run home from work, go straight to Sitan and spend about three hours every night training. Then I make sure to lift, run, and do sprints. My mind has been on nothing but this tournament. I just stay positive and remember that I am training for my fight because I want to, because I love it and it’s for me. Everything challenging in my way, I push past it, because fighting is going to be the hardest thing I can do. If I can fight, I can do anything.” 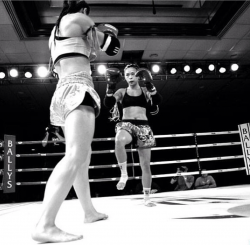 Despite her crazy hectic life as a Calvin Klein designer, Ng has always made Muay Thai a priority.

“There’s something in me that can’t stop fighting,” Ng says. “It’s this crazy dream I have. I don’t know where it will go but it’s something I want to do. Females like Florina Petcu, who she was for me, if I can be like that for someone else–especially the world that we are living in, if I can raise another woman’s confidence–that would make it all worth it.”

A way she shows her support is by making sure to attend fights that have women on the card, as she understands that trials they have to endure in order to get through fight camp to the actual bout.

“Whenever there are females fighting, I always make sure to show up and support,” she says. “I feel like they train harder and put everything on the line. I’ve seen that they are respected just as much as the men, and I think that’s great.” 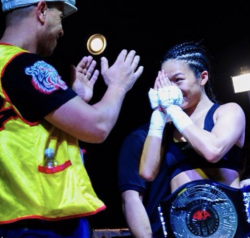 Many times when a fighter enters the ring with a customized pair of shorts or gear, it is often attributed to Ng’s handiwork. Patches on shorts or sports bras, specially-designed jackets, or intricate linings shirts–Ng has likely done it, no matter who the student is or what school they’re from.

“Well, the best part about being in this sport is the community,” Ng says. “This is the part I love the most and that I learn from more than anything else. We are all so connected and like a huge family, including the people I don’t know well or even personally. There’s such a great comradery altogether. That love and support is amazing, and that’s what gets all the fighters to keep going.”