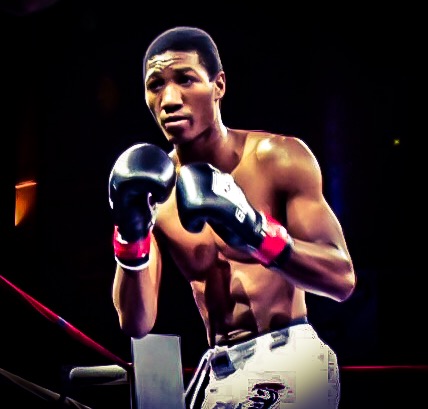 This Friday February 26th Lou Neglia and Ray Longo will present Combat at the Capitale 38, a World Kick Boxing event, using Glory Kickboxing rules. Glory is an international kickboxing company founded 2012, and is to kickboxing what the UFC is to MMA. This event will be held in New York City, at the Capitale, an NYC landmark that features Corinthian columns, Venetian glass and marble mosaic floors. 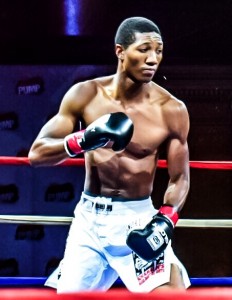 Brandon at a past Combat at the Capitale event

New York Fighting learned that Cuttino got the name “The Mechanic” after watching a boxing match with a competitor with the same nickname, as well as from the Jason Statham film by the same name. It seemed to fit because his coaches focus on “technique,” often asking him to be the “technician“ in the ring, in other words, a “mechanic.” 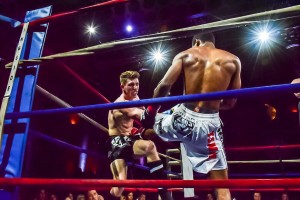 New York Fighting got the opportunity to catch up with Brandon “The Mechanic” Cuttino and ask a few questions.

AA – So tell me about your fight coming up.
BC – This Glory rules fight is my first professional kickboxing match.

AA – So who is Brandon Cuttino? Why are you kickboxing?
BC – I started when I was 8 years old. As a child I was into Ninja Turtles and Power Rangers. I lived in Central Jersey and had the opportunty to try out Tiger Schulmann’s. Then I was hooked.

AA – So when did you start competing?
BC – I started amateur fighting in 2010.

AA – Why did you turn pro?
BC – I fought guys in the amateurs who turned pro. So I thought I should be pro.

AA – What does it mean to be pro to you?
BC – It means I am at a level above. It allows me to become the best in the world. As a professional, people look up to you and I take that responsibility very seriously.

AA – Who were your role models growing up?
BC – First my Mom. Then growing up I looked up to Bruce Lee. I try to be humble.

AA – Who trains you?
BC – Tiger Schulmann is my head coach. I am also trained by Shihan Ron Schulmann. David Fish is my agent.

AA – Do you cross train? Do you do yoga or some other art or do you prepare for a kickboxing match by just training in kickboxing?
BC – I consider myself a martial artist. At Tiger Shulman I practice kickboxing, jujitsu. I train and teach MMA. I grapple and wrestle. I just happen to be competing on a professional level in kickboxing. I do a lot of stretching, conditioning and strength training.

AA – After watching tape of you I would say you have some of the Dutch style kickboxing in you. What would you say is your style?
BC – I do me. I take what Tiger Schulmann teaches me and make it my own. Dutch style usually uses hands to set up low kicks but I also use kicks to set up punches. I can kick high or low.

AA – So tell me about the human side. Some competitors become “bad guys” to sell tickets…is that you?
BCc– I want to be a role model. I teach at TSK in Brick, New Jersey. I like kids. Kids, that is why I teach. I volunteer. I go to Church every Sunday and volunteer there.

AA – How much will you fight? How often?
BC – As much as I can. With this fight I will try to fight 4-5 times this year.

AA – OK. Let me not hold you up. I hope this article gets out so your fans can support you in this fight. Good Luck Champ!

New York Fighting is known for making predictions on fights and won’t falter here. “The Mechanic” is a tall and rangy fighter who enjoys throwing combinations and swarming his opponent. He does not throw kicks and then stop and punch like other fighters. Instead, he flows from kicking to punching and vice versa. After bridging the gap, he successfully clinches his opponent so that they cannot take advantage of his long reach by fighting him on the inside.

Cuttino’s opponent is Raul Gonzalez from the Alpha Male gym. He is also an energetic fighter who is also a swarmer. He keeps busy and likes to check kicks on entry, throw high kicks to bridge the gap, and moves constantly becoming a difficult target.

However, as the shorter fighter, Gonzalez has to deal with Cuttino’s height and reach. New York Fighting says Cuttino beats Gonzalez because other than covering up, Gonzalez’ defense is less than accurate. He moves a lot, is busy, moves his head and covers up. Although they are both swarmer types, Cuttino has superior reach and better combinations with the kicks setting up his punches. Gonzalez kicks high but again often turns his back. We don’t see him being effective enough in this matchup to win. Gonzalez also telegraphs his kicks and blocks some kicks with his hands – mistakes his coaches should have corrected. 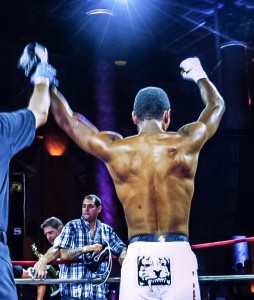 Check out Brandon this Friday, Live at Combat at the Capitale in NYC 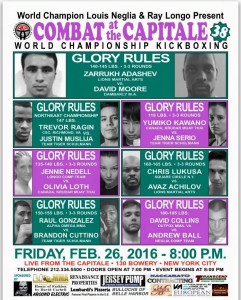 Lou Neglia and Ray Longo’s Combat at the Capitale