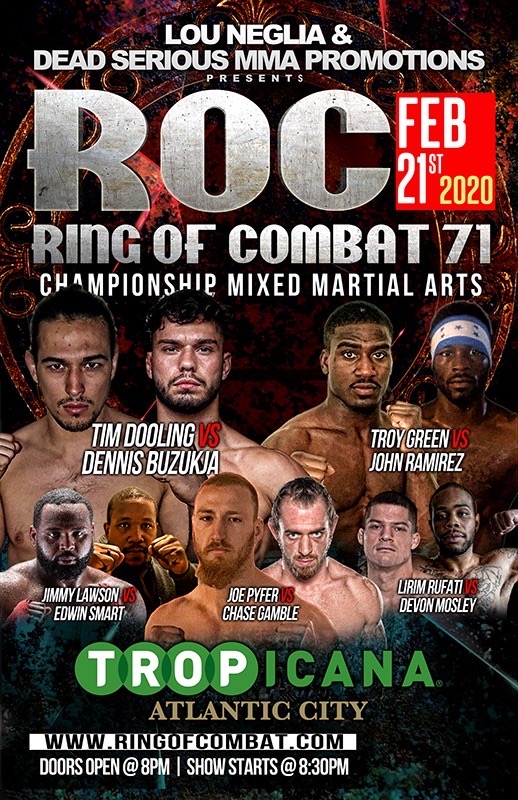 On Friday February 21, 2020 the long and storied history of Ring of Combat adds another chapter when they return to the Tropicana in Atlantic City for ROC 71. As one of the sports longest running promotions, ROC has played a pivotal role in the growth and expansion of Mixed Martial Arts here in the Northeast and beyond. Led by former World Champion kickboxer Lou Neglia, the MMA promotion has continued to consistently provide a platform for fighters to develop their brands, test their skills, reach their goal of making it to the UFC. This Friday’s event has past, current, and future ROC champions that could be be performing inside the UFC Octagon in the near future, but it all starts with a win this weekend. 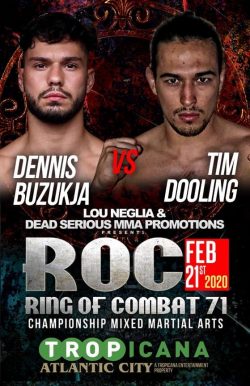 The Main Event features two talented Featherweights that both have the potential to fight at the next level, competing for the ROC 145lb belt. Challenger Dennis Buzukja has displayed his star power, packing the arena with fans, and showed off his KO power by winning his last fight in stunning fashion with a spinning backlist. Current Champion Tim Dooling has never been one to back down from a fist fight, but he’s also shown an improved ability to fight strategically and utilize his grappling and submissions. Both of these athletes come from well coached teams in Serra Longo Fight Team and Dante Rivera BJJ respectively, and they will likely be extremely prepared for this fight. 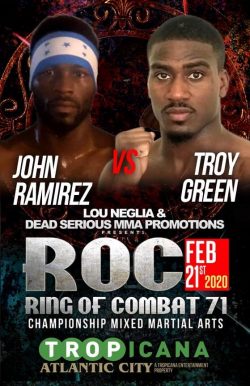 In the Co-Main Event, the vacant ROC Welterweight title is on the line, featuring up and coming fighter Troy Green fighting out of Bellmore Kickboxing MMA. still undefeated, Troy is coming off a spectacular KO win of his own at ROC 70 and he looks to follow in the footsteps of teammates Randy Brown, Andre Harrison and Gregor Gillespie to claim his own ROC belt. Standing in his way is a tough veteran welterweight in John Ramirez who likes to strike and is going to present a new test for Mr Green. 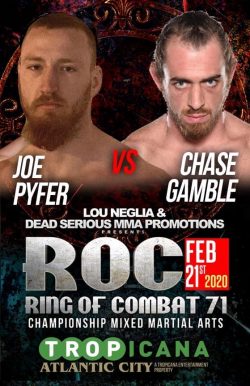 The card also features the return of the former ROC Middleweight Champ Joe Pyfer. Coming off the first loss of his career, Pyfer faces off against a new challenge in Chase Gambell. We should be in for an exciting fight as both these men will be looking to make a statement in the Ring of Combat cage.

ROC 71 also features some of the best prospects and new talent on the East coast. Check out the full Fight card below: