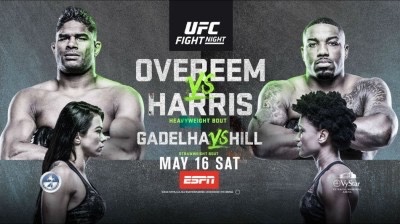 OVEREEM vs HARRIS
Sat, May 16 / 9:00 PM EDT
VyStar Veterans Memorial Arena, Jacksonville United States
For a third night this week UFC fans get LIVE fights on ESPN+.
Dana White and his team have put together another exciting card with a highly anticipated Heavyweight bout headlining the event. KO artists Alistar Overeem and Walt Harris meet after their fight was previously cancelled due to the disappearance of Walt Harris’s daughter.  Walt returns tonight with a reignited desire to fight for his daughter. Our heartfelt thoughts and condolences go out to the Harris family for the loss of their daughter Aniah.
The card is full of talented fighters who have overcome the recent challenges the world is facing to compete in the Octagon this weekend. Join us for a quick Main Card Breakdown 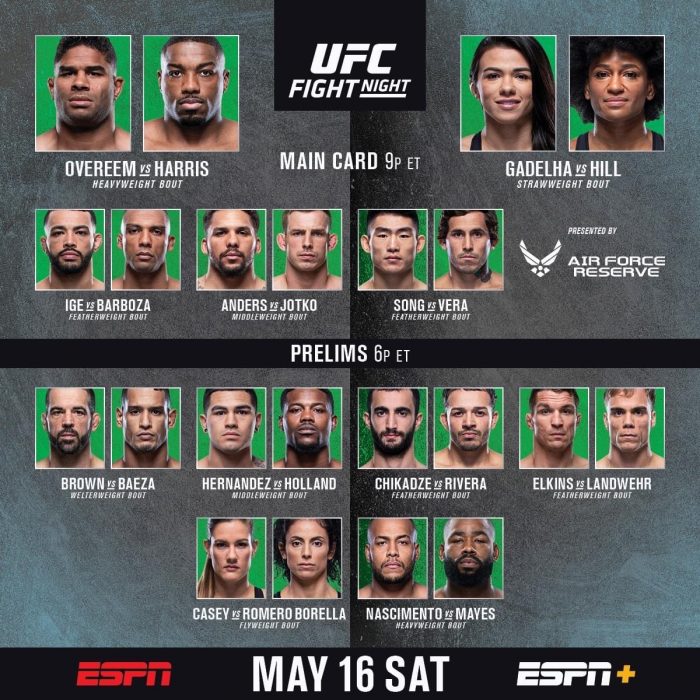 Both Alistar and Walt posses the ability to end any fighters night with one punch. Overeem clearly has the experience factor, but he has shown signs of slowing down in recent years, along with a possibly compromised chin. Although the storyline surrounding Walt Harris could cause some opponents to hold back, don’t look for Overeem to let Harris off here. Overeem is a killer, and he won’t “take it easy” on anyone. That said, if Harris can harness the energy and emotions surrounding his return to the Octagon, “The Big Ticket” could steamroll right over “The Demolition Man”.

This matchup is so good, for so many reasons.
Both these ladies do not back down from a good fist fight and consistently always show up in shape on Fight Night.  Claudia is a legit Black belt on the ground, but has also developed a badass striking style that focuses on power and pressure. Angela is a seasoned striker with years of Muay Thai experience, but in recent years has shown a drastically improved ability to defend takedowns, get back to her feet, as well as fight off her back.  Look for both women to move forward at the start of the fight, eventually Claudia will push for her takedowns once she establishes some striking  exchanges. A matchup like this with two hungry contenders could come down to a battle of who’s in better shape.

Despite asking to be released from his UFC contract months ago, Edson Barbosa is back in the Octagon, but this time at Featherweight. He meets a fellow dynamic athlete in Dan Ige, in a match that has possible Fight of the Night potential. It will be interesting to see how much speed and power will accompany Barbosa down a weight class, as well as how Ige will handle an opponent who is bigger and also possesses just as much speed and athletic ability. If the weight cut doesn’t negatively affect “Junior” Barbosa, he could become a division contender quickly, but first he needs to get past the alway tough “50k” Ige.
_______________________

This Middleweight matchup pits two dangerous finishers against each other. Each man has shown signs of becoming a possible contender during past fights, but recently each fighter hit some road bumps. “Ya Boi” Eric Anders still has the ability to KO any middleweight he faces, and has improved his takedown defense over his past few camps. We can almost guarantee that Jotko will test his takedown defense and be looking for quick submissions during each and every scramble that ensues. Look for Jotko to wear down Anders and get a submission win by choke.

In a battle of two top 15 Bantamweights, both Yadong and Vera have a chance to solidify themselves as a possible future contender in the division. Look for Vera to test out Yadong on the feet before trying to close the distance and attack with his wrestling game.  This won’t be an easy gameplay considering Yadong currently has a 100% takedown defense rating, so don’t be surprised if Vera pulled guard or welcomed a takedown from Yadong. This matchup has all the makings of a close back and forth fight with a split decision outcome.
Tags: Featured, fight odds