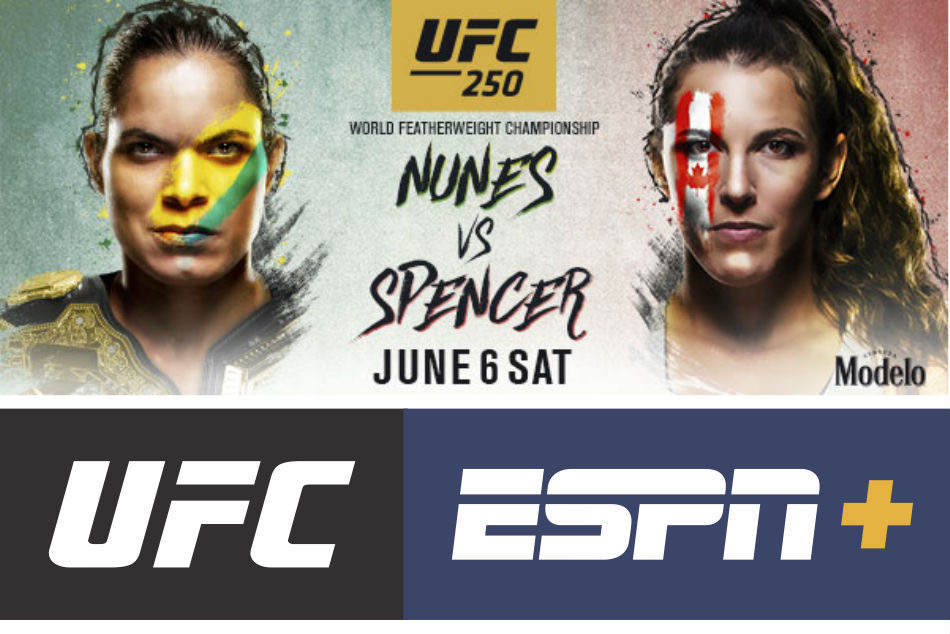 On Saturday, June 6th the UFC presents its second pay-per-view of its COVID-era offerings, as UFC 250 will stream out form the UFC APEX in Las Vegas with a decidedly less star-studded, but still intriguing slate of fights.  Women’s pound-for-pound queen will seek to add another notch to her legacy by defending her Featherweight title against Felicia Spencer, while Bantamweights Cody Garbrandt, Rafael Assuncao, Cory Sandhagen, and Aljamain Sterling all vie for a top spot among title contenders on the main card.  The stakes will be high, and there is much to breakdown in these featured fights, as our New York Fighting staff weigh in on their picks for Saturday’s event.

We’re excited to also announce the return of our first podcast, The Fight Cave, with the original crew!                             Join Matt Culley, Sergio DaSilva, and Kyle Antonelli each week as they Breakdown upcoming fights, go over the betting odds, and give us their fight picks.

To kick things off, the guys gave us their picks for UFC 250. 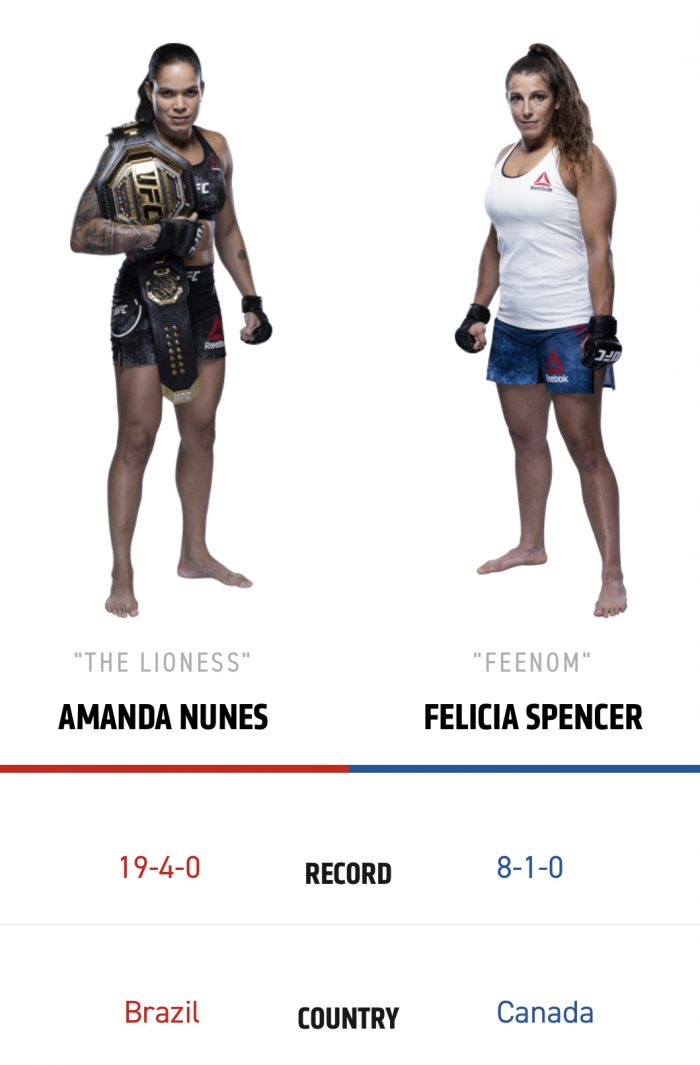 Intent on cementing her legacy as the greatest female mixed martial artist of all time, the champion Nunes takes her incredible 10-fight UFC winning streak into her first Featherweight title defense, following her gritty but successful defense of her Bantamweight title over former Featherweight champ Germain de Randamie.  Confused yet?  It’s understandable, as women’s Featherweight is a shallow division in the UFC, with fighters such as Nunes regularly bouncing between weight classes to get the best fights.  Nunes has proven the queen at either weight, evolving into a dangerous destroyer on the feet and adding a strong wrestling game to bolster her Jiu Jitsu skills.

Her opponent in Spencer, rather than a converted Bantamweight, is a deserving Featherweight contender who earned her spot by becoming the Invicta FC champion and going 2-1 in her UFC run thus far.  Her biggest win may be her first round submission over the highly touted Megan Anderson, who was pegged as a potential title contender from much earlier in her career.  Her lone career loss to Christiane “Cyborg” Justino looms large, however, as Nunes previously dispatched Cyborg to claim the Featherweight title in the first place.  Admirably surviving to the final bell, she nonetheless took a good deal of punishment in the process.  A rebound fight against Zarah Fairn dos Santos puts her back in the title picture with Cyborg’s departure from the UFC.

Kyle’s Pick:  Nunes is the heavy favorite for a reason, and it’s hard to pick against her against any challenger at either weight.  She showed heart and an ability to adapt in her last fight, and I find it hard to imagine a situation, short of Nunes gassing herself out by wailing on Spencer, that she loses this fight.  Nunes by TKO.

Matt’s Pick: I believe Nunes did the right thing by waiting for a full camp. Look for her to come out energized and focused. Nunes by TKO in rnd 2 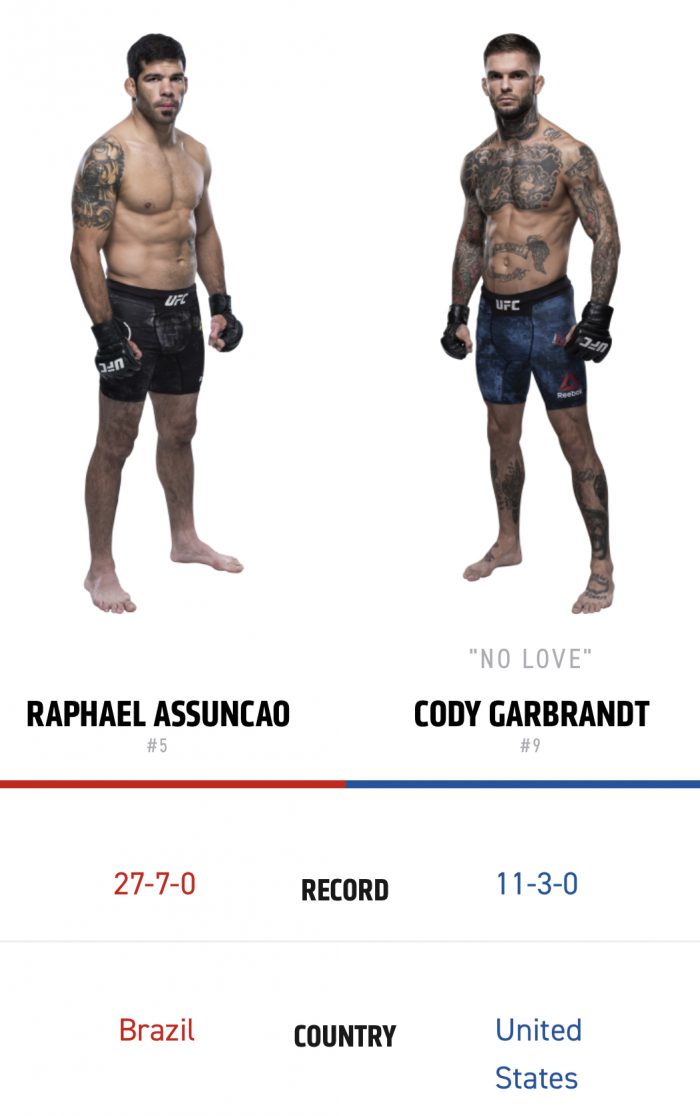 Two Bantamweight stalwarts look to right the ship as former champ Cody Garbrandt looks to end a rough 3-fight losing streak against perpetual contender Assuncao who has lost two in a row himself.  “No Love” was on top of the world following his domination of Dominick Cruz, but faltered in his first title defense against rival T.J. Dillashaw, falling by TKO in the first fight as well as the immediate rematch.  An accidental headbutt may have set Garbrandt on the wrong course as he attempted to bounce back against Pedro Munhoz, but he suffered yet another TKO loss against his underrated opponent.  After a year-plus layoff, Garbrandt comes into this fight with much to prove.

Assuncao has quietly made his niche as one of the best Bantamweights in the world for the past several years, but has never managed to break through to the championship level.  Part of this is due to his cautious style that once kept him out of big name fights, but part is also due to his falling short against elite fighters like Dillashaw and Marlon Moraes.  Impressive wins over the aforementioned Moraes, Munhoz, Aljamain Sterling (also featured on the card) show what he is capable of doing at his best, and at 37 years old his time at the top may be running out.

Kyle’s Pick:  I’m not sold on the idea that Garbrandt is a flash in the pan, and as much as I respect Assuncao’s skills and consistent improvements, I think Cody’s speed and power will be too much for Assuncao to handle.  Look for Garbrandt to get back on track with a KO victory.

Matt’s Pick: Cody moved across the country to switch things up and improve his skillset. Any transition takes time to begin to take effect. We should see the fruits of his labor this weekend with an overall improved game. That said, Assuncao is always a tough opponent and hard to put away. Garbrandt by decision. 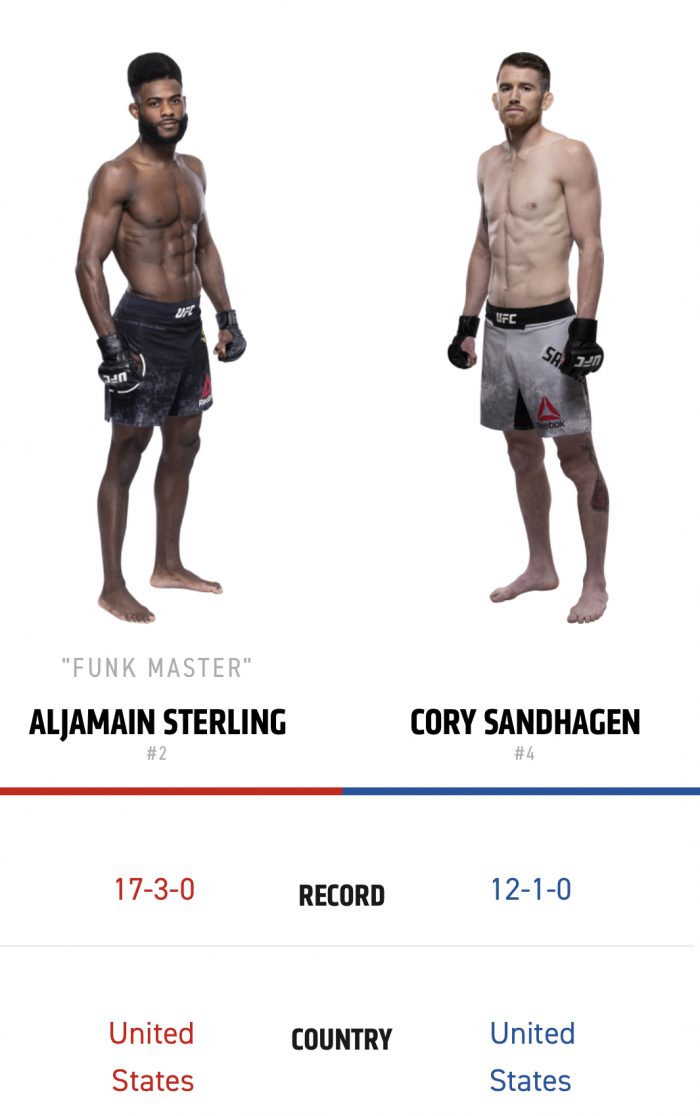 Despite its position as #3 on the card, this fight is just as significant as the co-main event.  Sterling has put together an impressive 4-fight win streak over the likes of Pedro Munhoz and Jimmie Rivera, which has him knocking on the door of a title shot for the now-vacant Bantamweight strap.  Unorthodox both on the feet and on the ground, the Funk Master is nonetheless technical and has found a way to befuddle highly ranked opponents who thought they would have an answer for his style.  His most recent fights show an increasing comfort in the cage and ability to blend the different parts of his game together.  An impressive win could give the UFC no choice but to let him have a crack at the gold.

Sandhagen has flown under the radar for a while, but his recent wins over John Lineker, and especially Rafael Assuncao, have made him impossible to ignore.  The tall, lanky striker has shown poise in the cage beyond what his experience suggests, most evident in his close fight with Lineker, who usually lures his opponents into wild brawls but could not do so against Sandhagen.  Sandhagen’s frame and ability to control distance may present the toughest challenge to Sterling, who is often the longer fighter, and that makes this fight especially interesting and hard to call.

Kyle’s Pick:  I have really been impressed lately with the Funk Master’s fight IQ and his ability to leverage his strengths to find a way to win.  It won’t be easy against Sandhagen, but I expect Sterling to alternate his kicking game and takedown attempts while avoiding damage en route to a decision victory.

Matt’s Pick: Aljamain’s evolution from a primarily grappling based fighter to a serious threat on the feet has been evident since his KP loss to Moreas. His footwork, head movement and kicking game compliments his arsenal of takedowns and “Funky” ground game beautifully. He has all the tools to be a Champion, just has to prove it once again against a very tough and dynamic Sandhagen.  I see Aljo outpointing Sandhagen on the feet and winning crucial grappling exchanges on the way to a decision victory.