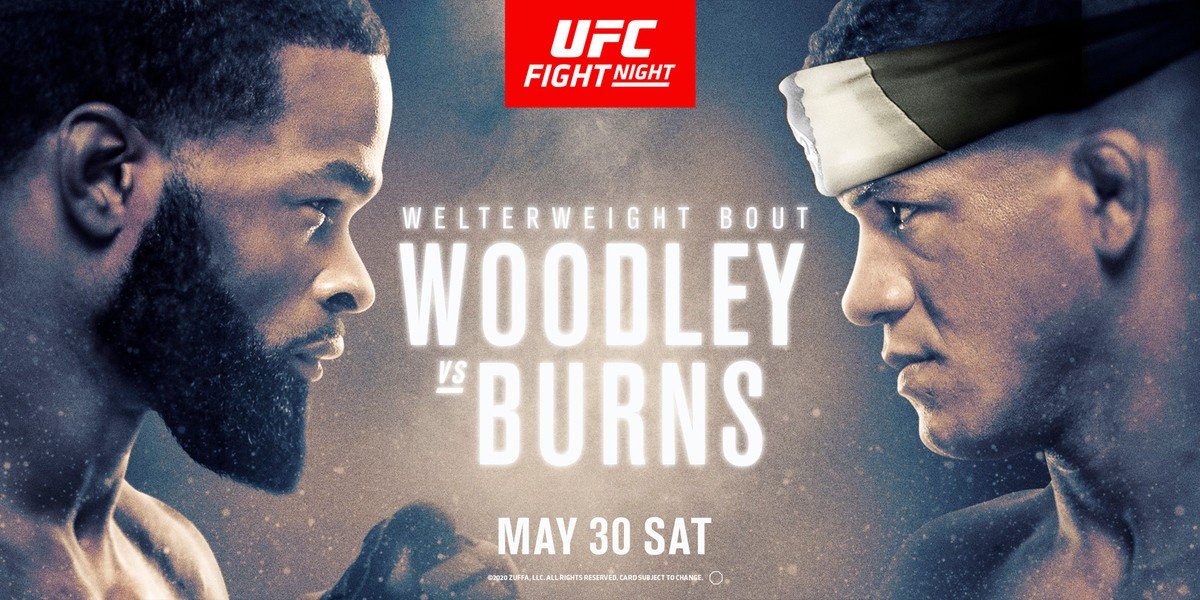 UFC On ESPN 9: Woodley vs. Burns

The UFC continues its improbable yet trailblazing path as the sole professional sports entity still putting on events in the United States, as it presents UFC on ESPN 9: Woodley vs. Burns, with a card that falls right in line with what fans have come to expect from a non-PPV card.  Emanating from the UFC-owned Apex facility in Las Vegas, the fights will take place sans fans and in a smaller Octagon than the typical arena-size cage.  Venue aside, the main event is genuinely intriguing and the main card highlights some fighters looking to break through, so let’s take a dive into the matchups and odds as the UFC provides its essential services for our entertainment.

Welterweights:  Tyron “The Chosen One” Woodley vs. Gilbert “Durinho” Burns 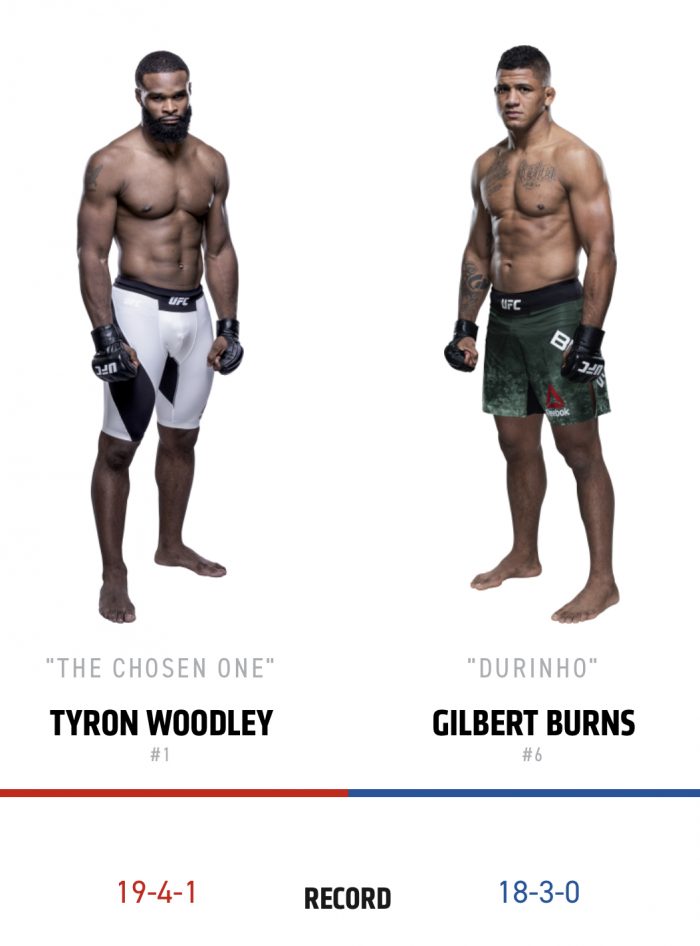 Former champion Woodley makes his long-awaited return to competition following his one-sided loss to Kamaru Usman, where he relinquished his title in a five round beatdown.  Once scheduled for a rematch with Robbie Lawler, Woodley pulled out with an injury, and then for a pivotal UK showdown with Leon Edwards this past March (cancelled due to COVID), Woodley looks to turn things around against the surging “Durinho.”  The book on Woodley is essentially written at this point – dynamic finishing ability but low output, and a tendency to neutralize his opponents, mixed with tremendous wrestling and athleticism.  It is unlikely that we will see new wrinkles in Woodley’s game, but there are legitimate questions as to how potent his offensive tools will be at this point in his career.  Was Woodley exposed in his last fight or is he as dangerous as ever?

“Durinho” has become a surprise contender at Welterweight after stepping up a weight class on short notice and stringing together some impressive victories on his current 5-fight winning streak.  Immediately a person of interest at Lightweight due to his world class Brazilian Jiu-Jitsu pedigree, Burns suffered a few tough setbacks as he rounded out his game.  With some impressive knockouts now under his belt, he has settled in as a threat to finish on the feet or on the ground, and his wins over Alexey Kunchenko, Gunnar Nelson, and Demian Maia have many wondering if he is a future title contender in the making.  Woodley will surely be his sternest test in answering that question.

Kyle’s Pick:  Woodley might not strike as much fear and hesitation into his opponents as he did before the Usman fight, but part of the reason he was so stifled was that he could not fall back on his wrestling in that fight.  Rather, he was soundly outwrestled.  Burns presents a very different skillset, and Woodley has shut down similar-caliber fighters before.  With much to lose, expect Woodley to play it cautious and take a convincing if not dominant decision win.

Matt’s Pick: Woodley is coming in with something to prove after his last loss. Although Burns is dangerous, Woodley should be able to diffuse his tracks and pull out a decision win 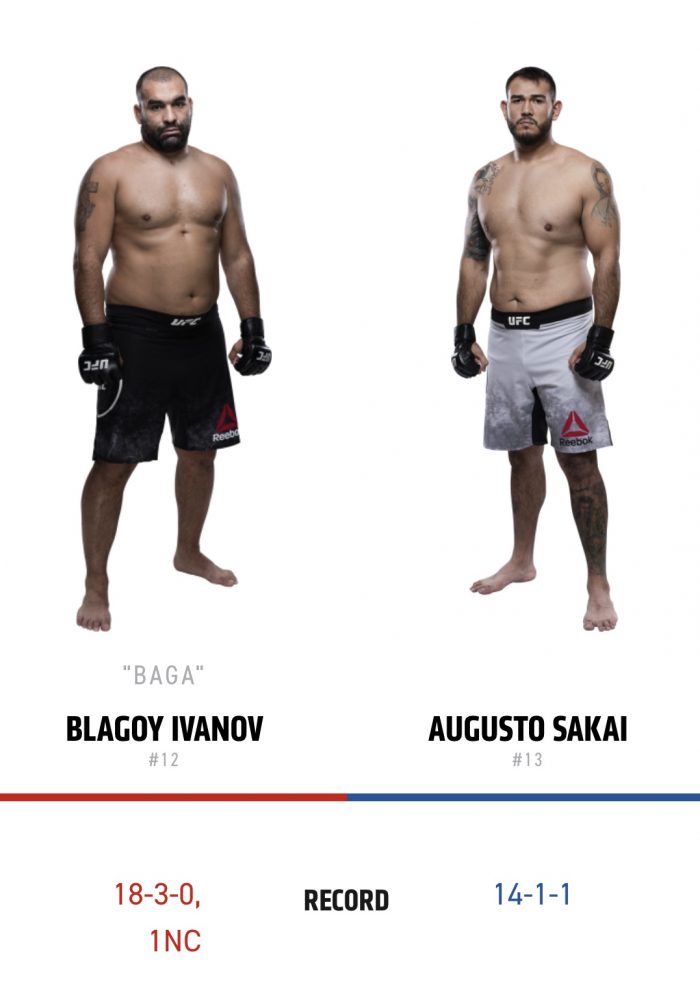 Ivanov, the man who ended Fedor Emelianenko’s undefeated streak in Combat Sambo, was once promoted as the next great MMA heavyweight.  Whether due to the stab wound to the chest that nearly ended his life, let alone his MMA career, or simply lacking the chops to break through to the next level, that perception seems to be a thing of the past.  Nevertheless, Ivanov has proven himself more than capable at the UFC level, serving as a gatekeeper to the top 10.  With a durable chin, competent striking, strong throws from the clinch, and a brutish but effective submission game, Ivanov dispatches the lower tier of UFC heavyweights while falling short to the likes of Junior Dos Santos and Derrick Lewis (if narrowly).  33 years old leaves the Bulgarian bruiser enough time to improve and make a run at the title, but one gets the sense that his role in this fight is to test the ceiling of his opponent.

August Sakai has strung together three straight wins since debuting in the UFC in 2018.  The Brazilian’s sole loss was to UFC veteran Cheick Kongo (in Bellator), but he has otherwise not tasted defeat.  He is fairly quick for his size although he does not appear to have a standout skill set.  Still, he seems to be improving as a fighter and turned out a quick TKO over Marcin Tybura in his last fight, showing some promise of what might lie beneath the surface.

Kyle’s Pick:  Sakai may have the better upside but Ivanov will be able to take whatever he throws and fire back at least as hard.  Ivanov’s split decision loss to Derrick Lewis showed his durability and heart, and I expect him to lean on his high level experience to take a decision.

Matt’s Pick: Ivanov has already proved he’s a top level heavyweight with a chin to back up his power. If Sakai gets pulled into a war, look for Ivanov to come out on top with a KO/TKO win. 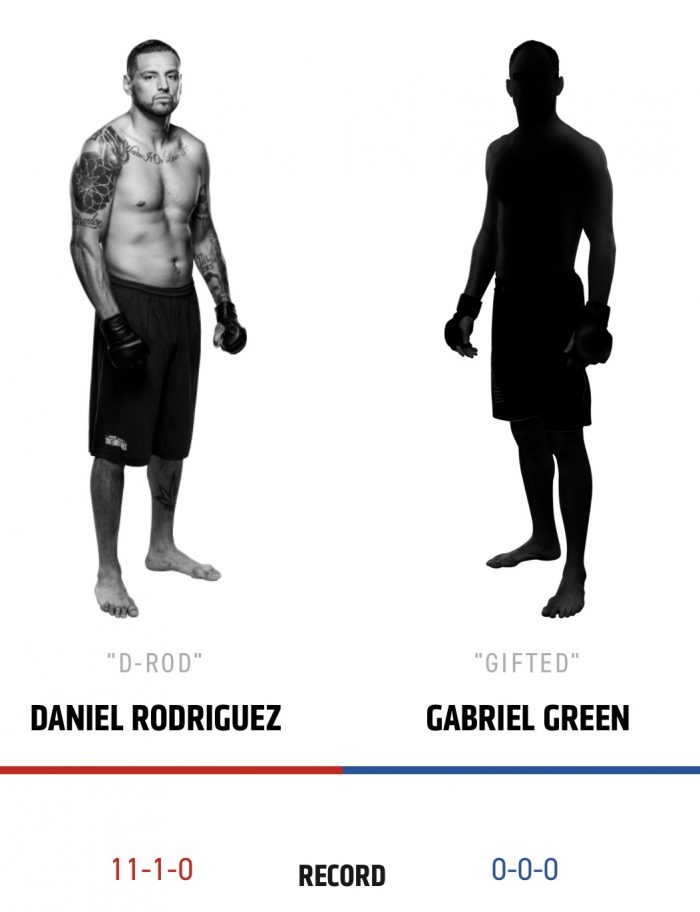 It’s prospects galore as Daniel Rodriguez makes his sophomore UFC appearance to take on Gabriel Green, who replaces his original opponent, Kevin Holland.  Rodriguez made an impressive UFC debut in February where he essentially bullied the dangerous veteran Tim Means before submitting him in the second round.  Fighting professionally since 2015, Rodriguez has only tasted defeat once, by split decision, and appears to be riding a wave of confidence into this one.

Green makes his UFC debut on short notice, as so many others have done before, and one questions his level of preparation for the fight.  Not just the lack of preparation, but the fact that he is fighting up a weight class, signals potential problems for Green against his taller opponent.  That said, Green also comes in with no pressure, and is a well-rounded finishing machine who has never been to a decision as a pro.  This could be a sleeper for fight of the night.

Kyle’s Pick:  I liked what I saw from Rodriguez against Means, a fighter whose skills I highly respect.  That performance plus his preparation for this fight make me think we will see a Rodriguez TKO victory.

Matt’s Pick:  Rodriguez was already preparing for a tough fight, gotta lean towards him given the short notice. 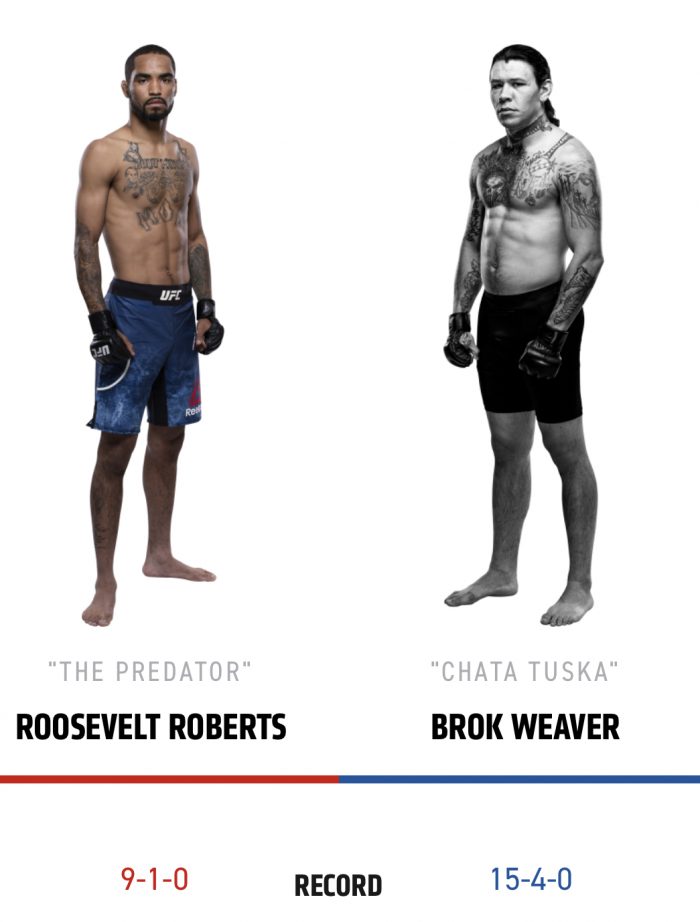 The UFC seems to think it has something in Roberts, as the rangy Lightweight prospect gets a spot on the main card against fellow prospect Weaver.  After an impressive performance on Dana White’s Contender Series, Roberts won his first two bouts in the promotion before stumbling against an underrated and motivated Vinc Pichel.  He rebounded in November against Alexander Yakovlev and looks to make good on his potential as he continues his development as a fighter.  At 26 years of age Roberts is far from a finished product, but he will need to show continued improvement to separate himself from the pack of hungry up-and-comers in one of MMA’s deepest divisions.

Weaver, for his part, also impressed on the Contender’s Series, though he comes in with somewhat less buzz after a less than thrilling tryout and a UFC debut victory by DQ.  Weaver seems to be a naturally aggressive fighter by nature yet also prone to clinching which can work to his detriment.  The abundance of decision victories that he amassed on the regional circuit illustrate that issue.  While both fighters have considerable upside, we might be in for a clinch-fest if both fighters embrace those tendencies that they have shown thus far.

Kyle’s Pick:  I have seen enough of Roosevelt Roberts to think he will continue his development and show us something new.  Weaver would need to dictate the pace of the fight and I don’t see that happening.  Roberts by submission is my pick.

Matt’s Pick: Great matchup, hard one to to decide for me. Roosevelt is definitely a talented young prospect, and he’ll need to control Brok’s aggression and use it against him. Rooslevelt by decision. 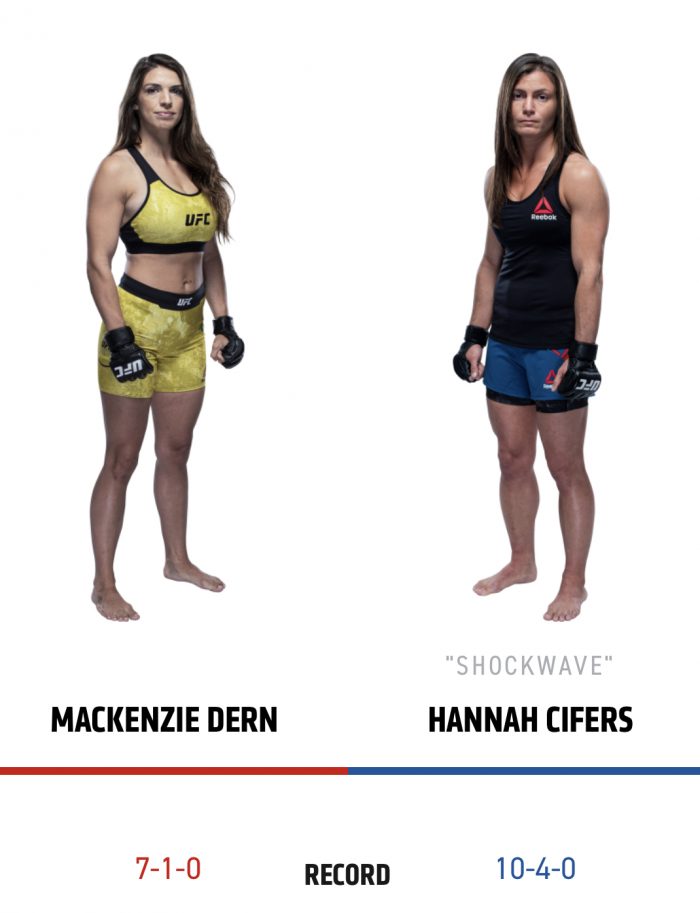 Much like Gilbert Burns in the main event, Mackenzie Dern entered MMA and the UFC with a ton of hype due to her all-world level grappling skill, being the son of famed BJJ black belt Wellington “Megaton” Diaz.  Struggles with making weigh marred her shine, and while her Jiu Jitsu chops have mostly paid dividends in the UFC, her wrestling and striking skills have not developed at the pace one would hope for a future contender.  After taking a year and a half off for the birth of her child, Dern returned in October to suffer her first loss at the hands of Amanda Ribas, leaving some questions as to her trajectory in the division.

Cifers, on the other hand, has been more active lately and has put on consistent performances, even though her UFC record stands at 2-2.  Her most recent fight was a TKO loss to a resurgent Angela Hill, who has looked as impressive as ever.  She will have the edge on the feet but should be thoroughly outclassed if Dern manages to get this one to the ground.

Kyle’s Pick:  While I am not as confident as I would have been a couple of years ago, I am putting some faith in Dern’s ability to get this to the ground, and once there I don’t expect it to last long.  Dern by submission.

Matt’s Pick: Gotta agree with Kyle here.  Dern showed some holes in her last outing but I think k she’ll get the fight where she wants it and get the submission win.