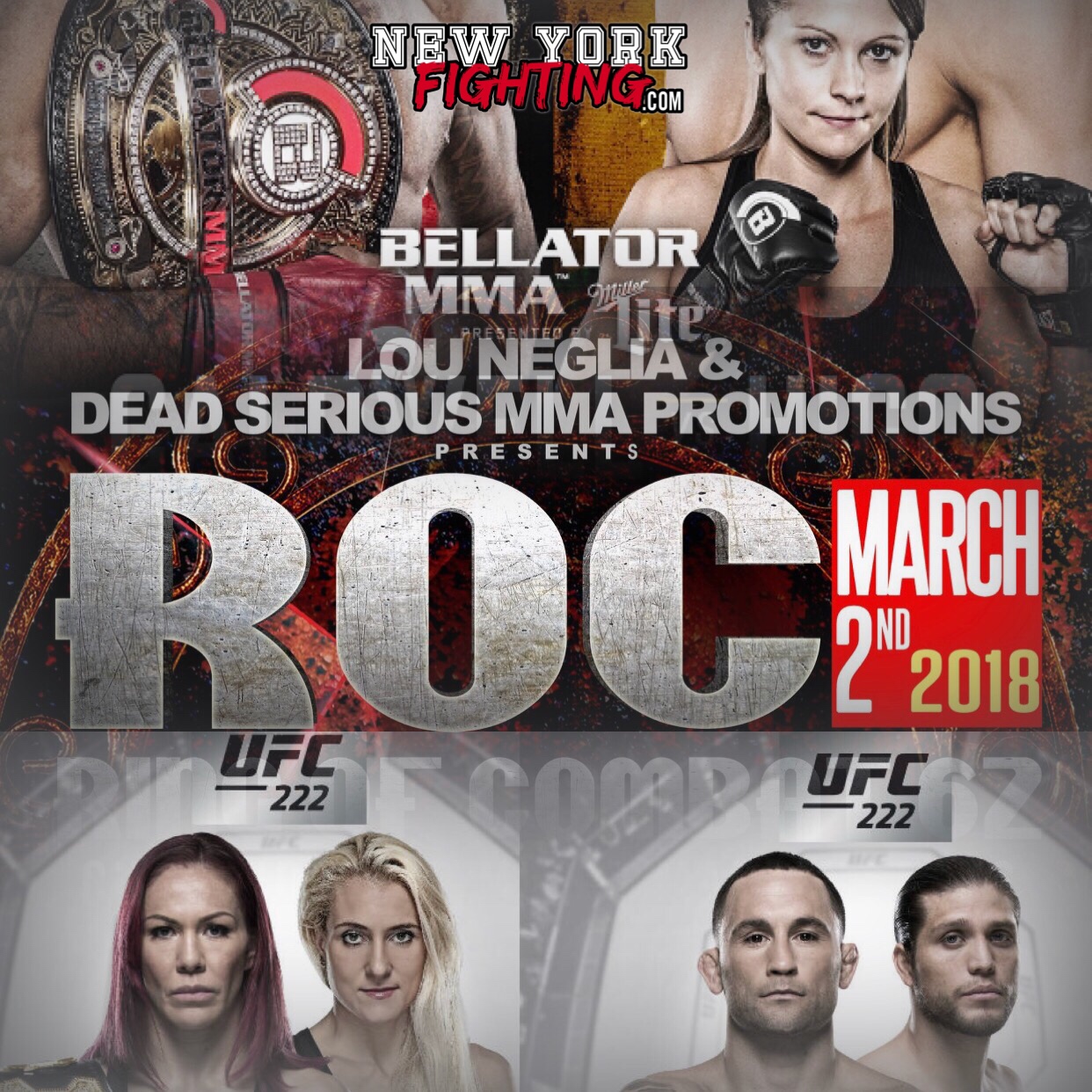 Louis Neglia’s Ring of Combat and Dead Serious team up to present the 62th installment of Ring of Combat this Friday night. The longest running show at The Tropicana returns for another night of professional mixed martial arts action, with four Championship bouts on the main card and a stacked undercard. Tevin Cooke comes off of a two-fight win streak as he challenges the current Featherweight Champion Bill Algeo. Former ROC Lightweight Champion Brad Desir fights for the Welterweight Title as he takes on current Champion Taj “The Black Spartan” Abdul-Hakim. We will see a rematch between Phil Caracappa from Dante Rivera BJJ and Brandon Urquijo from Brooklyn MMA for the vacant Bantamweight Championship because the previous holder of the title has gone to the UFC; their first fight going to a split decision in favor of Caracappa and being highly regarded as the 2017 regional fight of the year. William Ellliott and Tommy Espinosa will finally have their much-anticipated showdown as they battle for the vacant Flyweight Championship due to the former division Champion being selected to represent Ring of Combat in the Ultimate Fighter series. Some other big names to look out for on this card are Mike Elshamy from Madama BJJ, Edwin Smart from Serra/Longo Fight Team, Charalampos Grigoriou from Dynamix Boxing, Wendell Sneed from Carnicella MMA, Sodik Ismoilov from Lions Fight, and many more! Ring of Combat has a reputation of being the “American Idol” of MMA, having put over 100 fighters into the UFC. Come and see who will become the next big star in the MMA world! 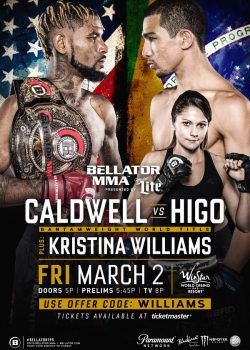 Bellator 195: Caldwell vs. Fialho at the WinStar World Casino in Thackerville, OK- Friday, March 2, 2018
Bellator 195 will see Bantamweight Champion Darrion Caldwell (11-1) defend his title for the first time, as he takes on the challenger Leandro Higo (18-3). Higo, the former LFC and RFA Bantamweight Champion, looks to add another title to his resume. Caldwell, the defending Champion, has only lost 1 bout in his professional career of 12 fights to Joe Taimanglo, but redeemed himself later the same year by winning a unanimous decision against Taimanglo.
Joe Taimanglo (23-8), who has is coming off of back to back losses to both the Bellator Bantamweight Champion and the Challenger of this event, will face the highly decorated Greco-Roman Wrestling Champion Joe Warren (15-6). A Women’s Flyweight bout will start off the main card as Kristina Williams (1-0) has her first fight since defeating Heather “Heat” Hardy due to a doctor stoppage in October 2017. Williams will have her second professional MMA fight against the more experienced Emily “Gordinha” Ducote (6-3). Gordinha looks to bounce back from her loss to Ilima-Lei Macfarlane in November 2017 when she attempted to become the Inaugural Bellator Women’s Flyweight Champion.

UFC 222: Cyborg vs. Kunitskaya at the T-Mobile Arena in Paradise, NV- Saturday, March 3, 2018
The UFC this weekend will see current UFC Women’s Featherweight Champion Cris Cyborg (19-1) defend her belt against the Invicta FC Women’s Bantamweight Champion Yana Kunitskaya (10-3). Kunitskaya looks to become the Champion in her UFC debut, as she takes on Cyborg who is a former Invicta FC and Strikeforce FC Featherweight Champion.
The co-main event will be an exciting showdown between the #2 ranked UFC Featherweight Frankie “The Answer” Edgar (21-5) and #3 ranked UFC Featherweight Brian “T-City” Ortega. Edgar, the Ring of Combat alumni, was originally set to fight current UFC Featherweight Champion Max Holloway in the main event of this card, however the Champion had to withdraw due to a leg injury. Ortega, the former RFA Featherweight Champion, will have to get past the relentless Frankie Edgar in order to get his shot at fighting for UFC Gold.
On the main event of the Fox Sports 1 Preliminary Card, Mackenzie Dern (5-0) makes her highly anticipated UFC debut as she takes on Ashley “The Spider Monkey” Yoder (5-3). Dern comes into this bout with some of the highest grappling credentials in history, having won several major World Championship grappling tiles and was at one time consider the number 1 ranked IBJJF female competitor in the world. Yoder looks to bounce back from two losses in a row, as she looks to get her first UFC win in her career.