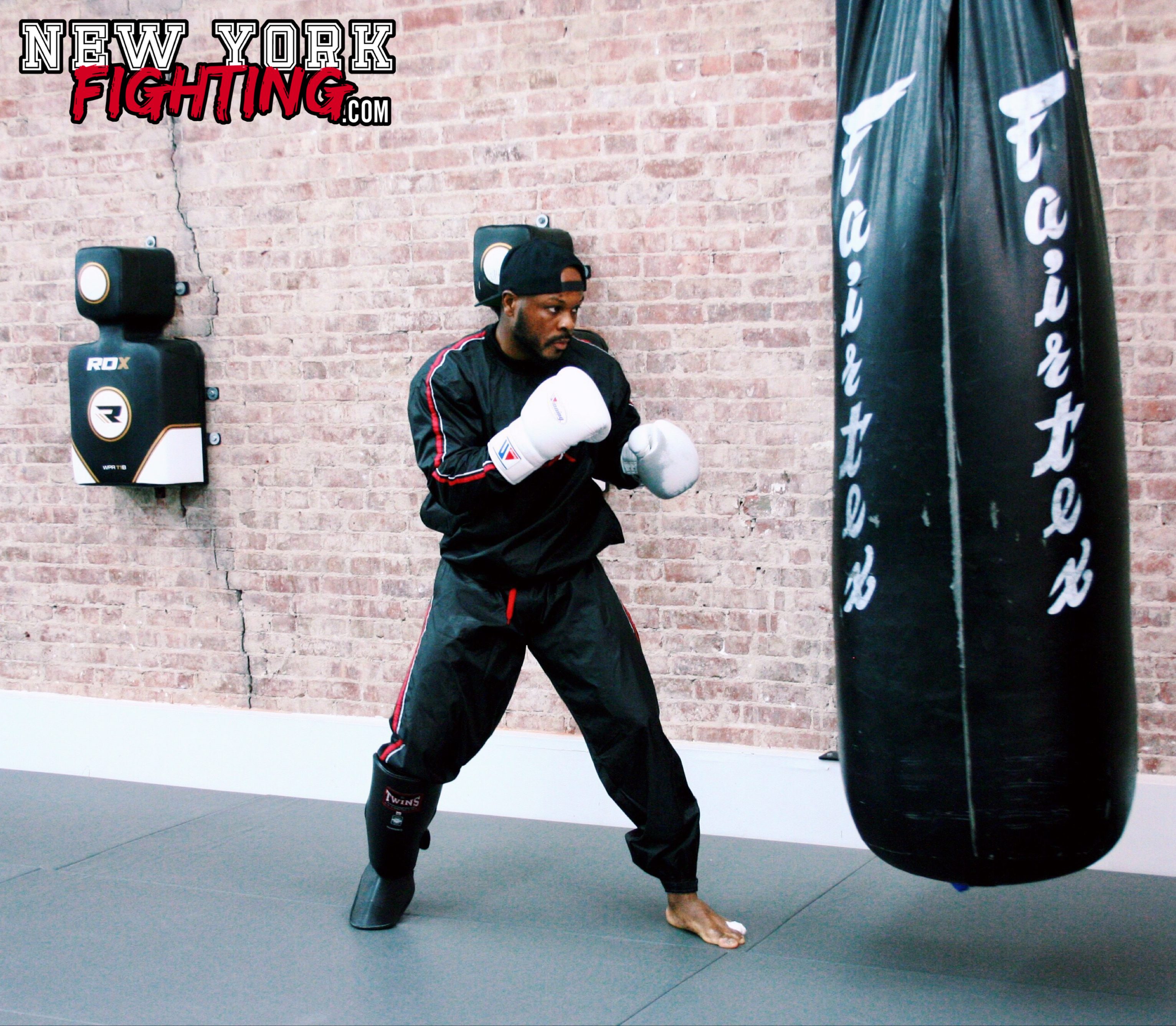 Friday, March 3rd, 2017. It was another packed house at the Broad Street Ballroom in Lower Manhattan for the Muay Thai promotion Friday Night Fights. The Swiss kickboxer Chris Lukusa paced anxiously in the warm-up area, a renovated gymnasium on the top floor of the venue. Originally from the Congo, Lukusa came a long way in order to be the headliner of the evening. It had been only two years prior since his plane touched down in New York City and hardly a handful of months that he felt like he finally had the grasp of the English language. The fighter had recently switched to Anderson’s Martial Arts Academy, and found himself flanked by his cornermen Sifu Dan Anderson and coach Victor Plajas. Stepping into the ring was nothing new for “Super Swiss” Lukusa, but everything else about this night was. 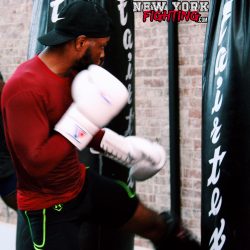 “I had been so nervous,” he recalls back at Anderson’s, several months after the bout had passed. Lukusa’s personality is a contradiction to his appearance. Large, hulking, and stern-faced, “Super Swiss” speaks softly and shyly. He smiles nervously in-between questioning, until he’s relaxed–which is visible. Lukusa’s body goes from tense and upright, his legs occasionally shaking and hands tightly grasping the ledge he is perched on like a bird afraid to fly, to his back curving into a C-shape, feet quietly dangling, and his breathing finally slowed down. “I wasn’t focused the way I should have been and it showed in that fight. I could’ve done more, could’ve done better, but I don’t like to say I lose fights. I like to say that I learn a lot from them.” 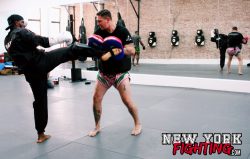 He had been clad in Anderson’s customary black-and-yellow Muay Thai shorts, with his name broadly proclaimed on the front and the name of his academy in smaller font on the back. Lukusa nodded feverishly as referee Chris Wagner read the rules to both fighters. Elvis Gashi stood in front of him and both competitors acknowledged one another. The men touched gloves and the fight begun. However, the 28-year-old had been fighting many things for a very long time.

Lukusa had moved to Switzerland at only six years old. For the first part of his youth, he was raised by his grandmother in the Congo and witnessed people dying daily due to the civil war that tore his country apart. In Switzerland, he was reunited with mother and found his passion–playing football, or as it’s called only in the United States, soccer. 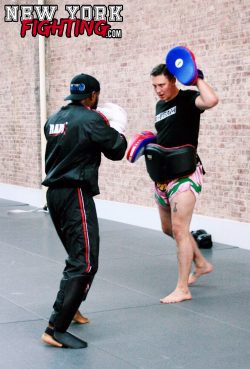 “I was a football player through and through,” Lukusa says with a laugh. Despite his serious demeanor, his entire face lights up with joy as he recalls the better parts of his childhood. “To play sports in Switzerland was very expensive. I know how to ski, but I couldn’t afford to purchase skis. To play tennis, you need to pay for lessons and a racket and a membership at a court. For soccer, all you need is a ball and a place to play. To box, all you needed was gloves and someone to train with. My friends told me to try Muay Thai and I was instantly hooked. Within three months I had my first fight and had won by TKO.” 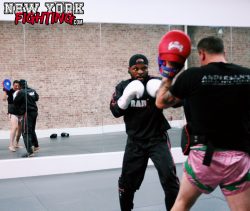 In the ring fighting Gashi, Lukusa felt himself be off entirely. Gashi was skilled, quick, and catching on to everything he was doing. What felt like an eternity but really was a matter of moments, Lukusa was on the ground, facing an eight-count. He stood up angrily and started swinging once the referee allowed the two to reengage.

“I was so upset with myself that night,” Chris says quietly, as he looks down at his feet. “I wasn’t fighting Elvis anymore, I was fighting myself. I wasn’t just losing to him, I was losing to me too. I respect him very much as a fighter, he’s very talented and works hard. But I’ll never forget the shame I felt, being on the ground like that. Once it got to that point, I lost all my focus. I was reacting with my emotions instead of thinking how I could win that fight. That’s what pushed me over and that’s when I knew I lost–when I stopped being able to control my feelings. I promised myself I’d never feel like that again.” 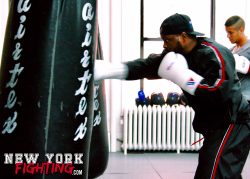 Lukusa’s emotions still play out on his face as he speaks, hints of remorse present as he recalls the evening. “I took what I learned from that camp and the fight, and used it to push me to do better in my training. My first fight, I didn’t care what happened, I just wanted to see where I was at in level. Now I just want to be the best version of myself I can be. I want to be known as a good fighter.”

As the months passed, “Super Swiss” was given an his opportunity to show his adopted city of New York his new skills and improve his 13-2 record at Glory Kickboxing 40, held at the legendary Madison Square Garden.

“This is what I moved here for,” he says excitedly. “I look at every fight and try to take something to learn from it. I might not have fought the way I wanted to that night, but now I can do so much better on this huge stage. Many great fighters have lost and came back even better, even stronger. It’s not about the loss, it’s about what you take from it.” 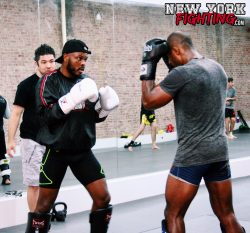 The noise of Anderson’s has increased as the classes have begun and students are shuffling in. His voice raises slightly but Lukusa still remains introverted, nodding at those who look in his direction or shaking hands with his teammates as they walk by. He continues talking but remains aware of what’s going on around him. His face glows as he speaks about his dreams.

“I came to the United States to have an opportunity like this, but it’s been a lot of hard work. When I came here, I knew no one. I stayed with a friend of my mom’s all the way out in Hempstead, sleeping on the couch in their living room. I only had my entire life’s savings, which wasn’t very much, so I couldn’t even afford to take the Long Island Rail Road to train in the city. I had to take several buses and trainings, commuting three hours both ways. I just recently moved to my own place in Brooklyn and I couldn’t have been able to do that without Dan Anderson. He helped me get work–clients and teaching classes–instead of wondering what was going to happen next to me. It felt like for such a long time I had to do everything on my own, that it feels really nice to have other people care about me and help me. That’s been one of the biggest differences in my life since I came to this academy.” 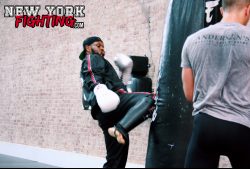 “Chris has changed almost completely since he’s been here,” his head coach, Sifu Dan Anderson says. “He’s completely developed as a fighter and really rebuilt his style. As far as his confidence goes, it’s been leaps and bounds. I see that he is much more relaxed with himself and others around, that’s he’s a little less shy and allows himself to be more playful. We are really glad he’s around, he brings a great energy to the team.” 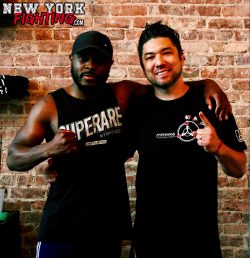 Despite being in the city for more than two years, Lukusa has yet to celebrate any holiday not alone, but is certain that will change now that he is at Anderson’s. His 29th birthday is the day after the Glory fight and for the first time in several years, he has plans with his teammates and friends to commemorate it.

“I was very lonely,” Lukusa says shyly. “I couldn’t talk to people–not because I didn’t want to, but because I didn’t understand what they were saying. Even now when people talk fast, I shut down. I don’t know what they’re saying and I get confused. Being at the gym so much has helped me a lot because I learned English better–that and watching TV. I love TV!” Chris grins widely again.

Ariel Sepulveda, another one of Anderson’s noted fighters, was the reason why Lukusa considered training there in the first place.

“I was training somewhere else, but Ariel told me to come try out his gym,” he says, nodding towards Sepulveda, who is standing off in a corner. The friendship between the two men is apparent as they joke around in between training sessions. Later, Sepulveda poses for a photo and pulls Lukusa into it, wrapping his arm around him. 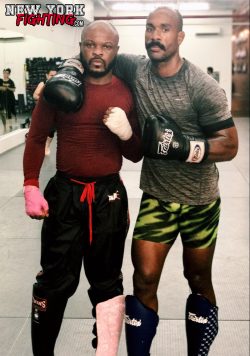 “I instantly felt welcome,” Chris continues. “It felt like I came home. As soon as I made the switch, everything about my training changed. I was fighting guys who were really tough and that I respected very much. I was being pushed in ways that I needed to be pushed. My career has completely changed, now I am having the chance to fight at Madison Square Garden, for one of the best kickboxing promotions in the world. When I was 16, I was watching K-1. 12 years later, I am fighting for Glory. Life in New York doesn’t get any crazier than that!”

Originally, Lukusa’s path had seemed to be on the straight and narrow. He went to university in Switzerland to be a watch designer while fighting every three weeks. The fighter worked full-time, paid his bills, and supported his mother. It’s been a huge risk for him to come across the ocean and leave everything he had behind. While he’s made a lot of gains by being in the States, not having the ability to see his mother for so long still looms on his mind.

“My mom is my number one,” Chris says with his brow furrowed. “I talk to her every day and she always has good advice for me. She tells me to be positive, to keep a good attitude, and to treat others well. I miss her. The hardest part has been to be without her.”

Lukusa pulls his phone out to show photos of her, a smiling woman who doesn’t look much older than him. “I work hard to make her proud. Sometimes there are setbacks but she always reminded me to keep going forward. So, of course, I listen to my mother. I keep going forward and trying to be a better me.”

A large red drum sits in the corner of the mats at Anderson’s and Lukusa laughs when asked if it his. During his fight camp, he’d break out into dance–an immediate shift from his focused face as he worked with his training partners. The other fighters around him follow his lead, copying his movements unabashedly and with smiles. 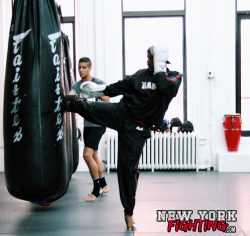 “I just want to be remembered as a good person, someone who did good things and helped others,” Chris says seriously, his playful grin replaced by thoughtfulness. “I want to bring a smile to my friend’s faces and remind them that I will always be there for them. Since I came to Anderson’s, I feel like I’ve really become a man. I started taking care of what I needed to take care of and tried to be a better me so I could make my team better. My life in the city has been a struggle but I stayed because I love kickboxing. In this sport, everyone is friends and they feel like family. Nothing is as hard as living in the Congo was but there were lots of times that I wanted to quit. Now I have way more reasons to keep going. I’m being looked out for and my life has changed so much for the better. But I keep this promise–When I call you my family, I’ll always take care of you. Everything they’ve done for me here is something I will never forget.” 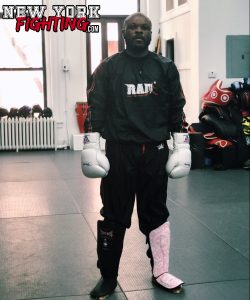