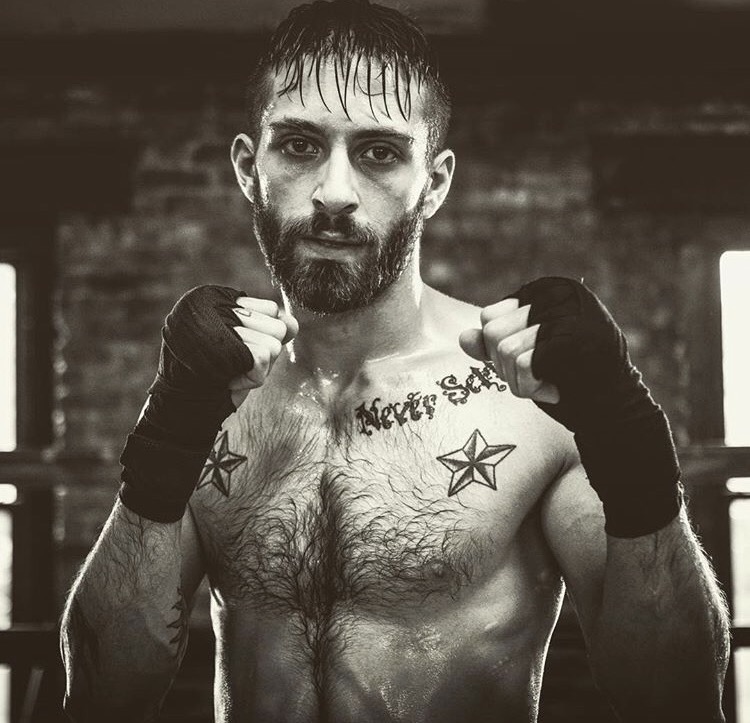 The New York City Muay Thai fight scene is still in its growing phase, but there are names that come up time and time again on fight cards and shows. One of those names is John “ Johnny Love” Pina. The Brooklyn-based 25-year-old trains at Ardon Sweet Science Gym. Recently, he traveled to Italy and cemented his reputation by becoming WKA world champion in 2 divisions. With an upcoming fight at Warriors Cup 30 in Queens and a seminar at Amerikick Park Slope, it seems as though Pina never runs out of energy.

As the timers blare and the sounds of gloves hitting pads slam in the background, Pina looks at home sitting next to a heavy punching bag as he drapes himself on the edge of a boxing ring at Ardon’s. Tall and dressed in black, from far away he could appear menacing. As one gets closer to him, the small smile lines around his face become more apparent and it’s clear that he is relaxed in this space. He says it’s because he’s “completely obsessed and engulfed by this sport.” It’d be a hard reach to find anyone who loves Muay Thai and training more than John Pina. 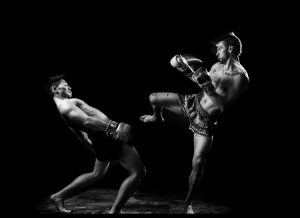 Pina began martial arts when he was 4 years old. He received his black belt in both Tae Kwon Do and Kyokushin Karate when he was about 11, and then took a short break to “actually be a kid for a while.” He jumped into Thai boxing in his early teens at Ardon’s, and that’s where he has stayed for about half his life.

“This is my family. It’s the best place to train. When I originally came, I planned to be a MMA fighter. Ardon’s is really a boxing gym with Thai boxing as well, and I really just fell in love with it all. It became my whole life. This place is my home–when I was dealing with problems, I may not have been able to talk to my parents or my friends but being here, I always had someone on my side to talk to.” 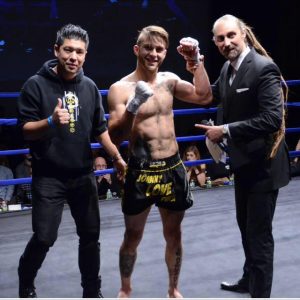 The problems Pina faced weren’t just about girls or bad grades. When he was 16, he was stabbed 13 times during a fight he was trying to break up. With nerve damage in his hand and eye, issues with his right arm, and a sudden overwhelming distrust for the outside world, being a teenager in New York became a lot harder.

“My confidence was really shaken. I feel like I was just traumatized from the event. When people came too close to me, I became uncomfortable and would get twitchy. I didn’t want to leave my house or do anything. Being at Ardon’s helped me rebuild myself and get past all of that. I focused on training and being technical, and being the best Thai boxer I could be took over my life.”

With plans of going pro, “Johnny Love” had to push himself first. He went to the WKA world championships in Italy with Team USA to gain as much experience as he could. 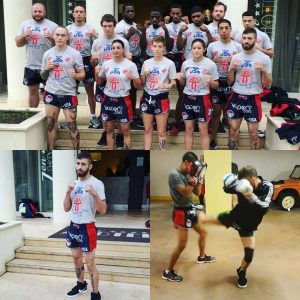 “It was an honor to go there and be a part of it. I wanted to fight international athletes and see what other countries had to offer. I even fought a pro fighter during the tournament and was a little surprised at how well I did. I’ve come to realize that it’s not about worrying about a guy who hits hard, it’s about how you react to a guy who hits hard. It was a great experience and I feel like I could really handle myself. I never felt like I was losing. I think it only makes sense to go pro, I’ve proved myself as much as I can as an amatuer.” 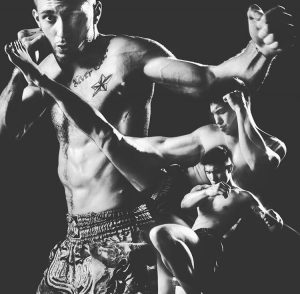 With a record of 20-3 in just the last three years, there has been no shortage of fights for Pina. His coaches and training partners–Greg Ardon, Erick Castro, Andrea Galbiat–all support him unconditionally in his pursuits. Castro is his primary training partner, but he works with all kinds of fighters in order to prepare for the mysteries a tournament has to offer. While it was exciting to overseas to fight, it was also a feeling resembling relief.

Pina explains that “In New York, you know everybody. It’s likely that at some point you’re going to be fighting one of your friends. When we are in the ring, I’m going to hurt you because I assume you’re going to hurt me as well. It’s not a problem to fight someone that I know, but it was nice to be in Europe and fight someone that I didn’t. Hitting people with bad intentions in Italy was a lot easier because they weren’t my friends.” 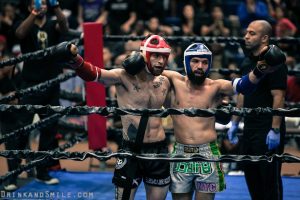 Now John’s primary focus is going pro for any organization that will take him. His eye is on Glory and Lions Fight, and he has fought several times under K-1 and Glory rules. Pina considers himself more of a K-1 fighter, with a very Dutch style. He focuses on his weak spots to get better and is always looking for the holes in his game. Much of that can be attributed to his previous martial arts experience, as it’s easy for him to focus and come into the ring with a smile on his face. Cheers or boos don’t affect him–the only thing on his mind is the fight.

To further emphasize just how much Muay Thai means to him, Pina left a stable and high-paying job for the often-tumultuous world of personal training. That shift allowed him to pack in more training for his fights and focus on improving himself.

“Well, my family and friends are really supportive. They know that I pick fighting over money any day. I love fighting more than anything else. My mom put me in martial arts in the first place, so when I finally told her about leaving my job, she just laughed about it and said that my passion was more important than anything else. So many people have my back on this and to me, that means a lot.” 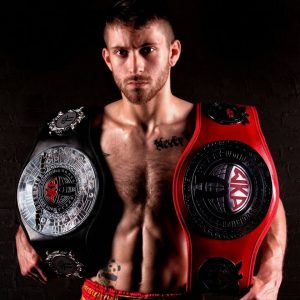 Pina’s biggest inspiration comes from his aunt Jeanette Magaro, who passed away shortly after the stabbing, when he was 17.

“She adopted me and raised me. I called her my mother. I wasn’t doing anything productive with my life and she supported me. Really, she saved me. If it wasn’t for her, I’d be dead by now. I promised her I would make it and do what I love. I think about her every day and before every single time I fight. I carry her with me at all times and I’m just here trying to make her proud.”

“I know I’m in the wrong sport to make money, but I’m happier than I ever have been. Surprisingly, people come to me for advice. Lots of friends I grew up with have come to me and told me they’re happy to see me doing well. I’m making a life out of what I love. I don’t need money to be happy. I need friends and family to be happy. I’m content with who I am and what I have around me.”

Pina shares this ideology with his training partners and teammates. For someone who trains two to three times a day, seven days a week, he places a lot of emphasis on making his teammates better. He enjoys doing the things that many fighters at his level avoid, such as holding pads for others or going out of his way to build up the team.

“I’m only as good as the guy next to me, I want to make everyone better. I’d rather be the worst at a top-level gym then the best at a crummy gym. Your gym is your community. I’m only as strong as the weakest link.”

Most of Pina’s day revolves around training–he estimates that he spends about four to six hours in the gym every day. This leaves him too tired for a social life outside of work and the gym, and when he goes home his focus turns to nutrition and rest. Literally all aspects of his life illustrate his dedication to the sport. He’s hoping that one day it will pay off, but with his skills and determination, there is no avoiding the success that is coming his way.

“I feel like I partied myself out when I was younger, and now I’m just happy to be sweating in a  gym and getting punched in the face. Eventually I’d like to open my own gym, but for now I’m just one hundred percent focused on fighting. I remember a Mirko “Cro Cop” Filipovic interview where he was getting grilled because he was still fighting and he was already so much older. He had said, ‘The day I can’t fight is the day a piece of me dies,’ and I completely agree with that. I was born to be a fighter and I will die a fighter.”

“I had been making some bad choices in my life because I was trying to cope. I didn’t have things very easy growing up and the stabbing and the passing of my aunt just made things a lot harder. The only person who was close to me wasn’t there anymore and I wanted to numb myself from the pain. Once I got into fighting, Thai boxing made me realize that I was trying to escape reality. I understood then that I didn’t need to do the things I had been doing before, because I could live my life in a different way. I feel very connected to my training partner Erick because I feel like we understand each other on things like this. He’s like my brother and we push each other and want to help the other one grow. Like I said before, my gym is my family, and they have helped me to become the person I am today.” 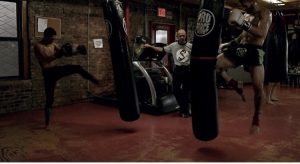 In such a short amount of time, John Pina has definitely made a name for himself. The legacy he’d like to leave, however, is to deter any copycats.
“I think the reason why people lose is because they try to be like other fighters. You try to kick like someone else or move like this guy–what if you just tried to be the best version of yourself? I struggled with that as well, but once I realized that I’m a great fighter just as I am with what I can do, I found that I was training and fighting so much better. You are good enough. You don’t need to live your life as a comparison. You want to be greater than the people you look up to, and that’s my pursuit.”

Video courtesy of You Bin