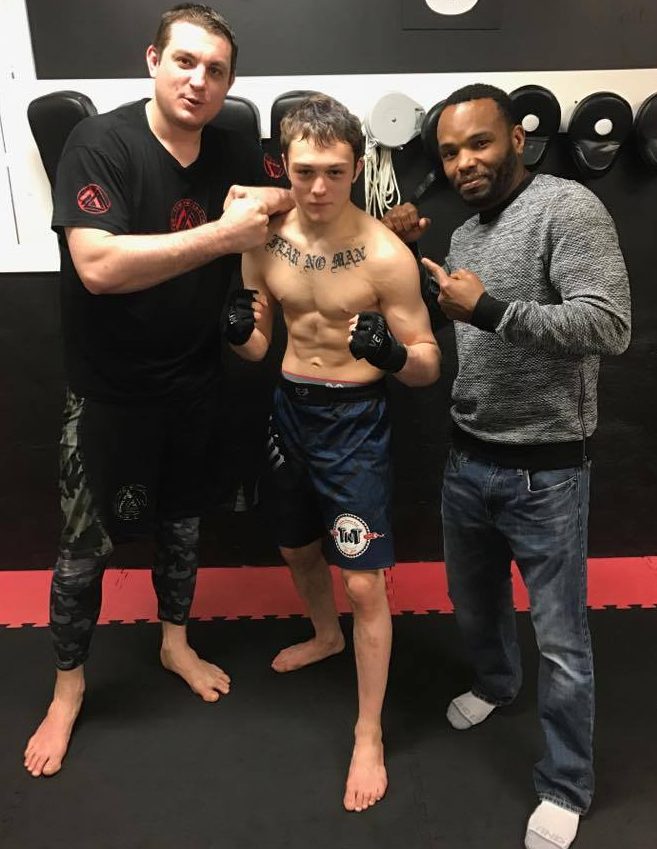 Sean Larkin is ready to take the UFC by storm but he isn’t there just yet. The 145 pound amateur with a 3-0 record, out of Commack, Long Island representing Commack MMA has been the victim of a couple of cancelled bouts, one being against Jason Olcott and the other Kevin Mitchell. In his last fight at NYFE 12: Severe TrauMMA he knocked Manny Gomez out in the first 8 seconds of the first round. 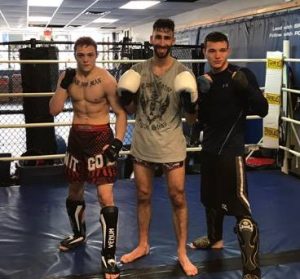 Larkin is a hungry 19-year-old trying to fight anyone, anywhere, anytime. It has been a while since he has fought an official fight but Larkin says that hasn’t stopped him from training.
“I’m in the best shape of my life,” Larkin said. I’ve been at three fight camps since my last fight, and it just makes me hungrier to get back in the ring.” The teenage fighter is part of a slew of younger talent coming out of Long Island led by his coach Tom Muller, a former MMA fighter himself. Larkin couldn’t praise Muller enough.
“Tom is like a father figure for me,” Larkin explained. “He taught me everything I needed to know about fighting, and no one pre hype prep talks you better.”
Larkin also said his coaches have chemistry, “like he’s never seen before,” when it comes to showing all of the fighters at the gym how to be great.
“I couldn’t have done this without these guys,” Larkin exclaimed. “It’s just a different atmosphere.”
On May 6th at New York Fight Exchange 14: Pressure Creates Diamonds, Sean will be fighting Ron Leon for the New York WKA Featherweight Championship. 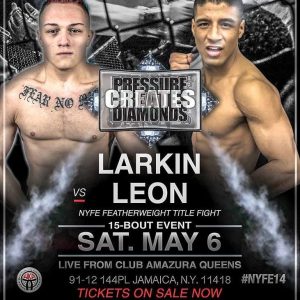 “I’m equally confident in every aspect of my game,” working with Muller, Larkin told New York Fighting. “I’m also confident in my striking and the fact I can end the fight at any time.”
In his eyes though, there is no rush for the 19-year-old, as he is the youngest fighter on Commack MMA’s roster. Larkin always loved fighting but finally put all his skills together under Muller and won his first fight at Jackhammer, a couple of months after his 18th birthday.
“I want to stay on the amateur level and get as much experience as I can before I try and go pro,” Larkin said. “I’m stepping up my competition and moving up levels.”
Many MMA fighters who made it big didn’t make it to a major promotion until their late twenties or even early thirties, so Larkin has plenty of time to improve his skills and become even stronger physically, emotionally, and mentally. The kid from Hauppauge, Long Island can’t wait to show the world what he’s made of.
“I don’t do this for fun, I do it for the UFC belt,” Larkin said intensely. “When I’m at the top I’m going to have a target on my back. I can beat anyone at any time.”
If and when he does turn pro, Larkin said that he plans on possibly fighting ten pounds lighter at 135, but likes where he is at right now. Going up ten pounds to 155 wouldn’t be ideal but he believes he could do it.
“The 155 division is tough,” Larkin said. “I know I can be competitive though, if it did happen.”
The dream is finally real for Sean Larkin and at age 19 he has no ceiling in sight.  “I’ve been wanting to do this my whole life,” Larkin said happily. “I just never found the right gym.”  Now with the right gym and the right coaching, keep your eyes open for this young prospect’s next steps. 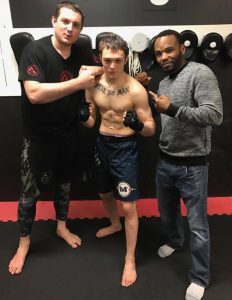 The dream is finally real for Sean Larkin and at 19 there is no ceiling for this young man. He not only sounds confident – he fights confident. His last bout ended in all but 8 seconds, and if you haven’t watched the video, please do. Larkin is for real, and with his determination and heart along with the coaching of Tom Muller, he should be bound for greatness in the next couple of years.
“I’ve been wanting to do this my whole life,” Larkin said happily. “I just never found the right gym.” Well, now not only does he have the right gym and the right coaching. He has the right mindset to become the future 145-pound champion in the UFC.
Larkin is currently ranked 26th for New York Amateur Lightweights and 73rd in the US Northeast for Amateur Lightweights.
Writer: Aaron Kopelman
Editor: Kyle Antonelli
Photos: Courtesy of Sean Larkin
Tags: Amateur, Fighter, MMA, New York Fight Exchange