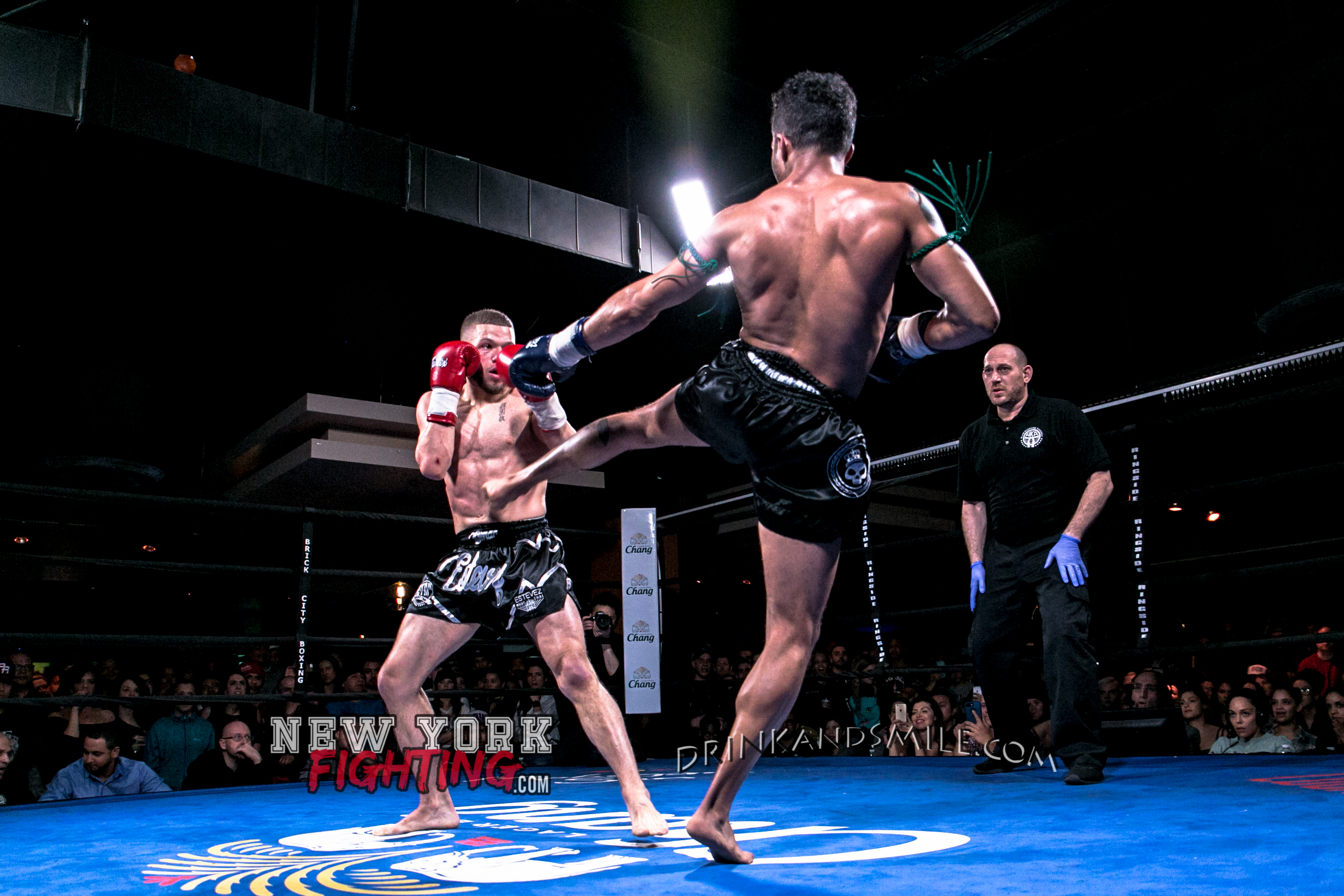 A rainy Friday night didn’t stop fans from packing Lucky Strike on 42nd Street for Friday Night Fights’ second March event. The bowling alley houses a fighting ring that sits behind the lanes, with a bar and concession stand for guests’ enjoyment. It was WKA-sanctioned Muay Thai card with many familiar academies in the house, including frequent visitors 8 Limbs Academy from Pennsylvania and Florida Muay Thai from Florida, as well as home teams 5 Points Academy and Renzo Gracie Academy. The night became more celebratory as midway through the fights, the audience sang Happy Birthday to the owner of the promotion, Justin Blair and presented him with a flaming cake. With 8 fights and 3 titles on the line, it was another amazing event highlighting some of New York’s finest.

An ammy debut for both women, both fighters were taller and worked on closing the distance. In R1, Ferris caught Scully in a clinch that appeared to tire her opponent out. Low kicks were the name of the game in R2 as Scully used teeps to keep Ferris away from her, but Ferris pressured on. R3 Scully looked for a knockout and spun Ferris to the ground, as Ferris continued with heavy hard kicks to the midsection and inner thigh. Ferris came with 2 powerful jabs straight down Scully’s face, cornered her, and ended the round with a painful knee to her stomach. Her fierce dominance and power cemented her win in her first fight. 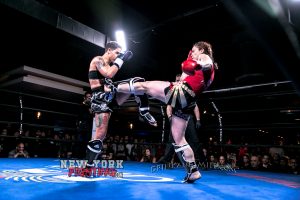 The second amateur debut of the night started out aggressively as the men fought at a close distance. They immediately entered the clinch and primarily boxed. Their knees were like daggers. Medina utilized his knee transition to jabs down Luong’s face as he distanced himself. R2 was much of the same as Medina aggressively kneed Luong. Luong managed to get in several face and body shots, but was cornered by the end of the round. Luong came back stronger in R3 by retaliating knees and punches, but Medina ultimately took the win by unanimous decision. 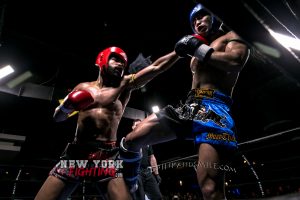 Douglass started the fight with a head kick as Stoffel worked the body and came in with strokes to the face. After Douglass’ 2nd head kick, Stoffel retaliated by kicking him so hard that he fell. In R2, both men worked at different distances. Douglass favored a farther distance, utilizing head and long low kicks, as well as a successful teep. Stoffel tried to close the distance, working on boxing and close-range low kicks. R3 was a battle, as Douglass immediately closed the distance and bloodied Stoffel’s nose with his punches. Not to be deterred, Stoffel pressured his opponent around the ring with his boxing, despite the blood that was on his face and gloves. It was a courageous and hard-fought bout on behalf of both men, as Stoffel improved his record to 2-4. 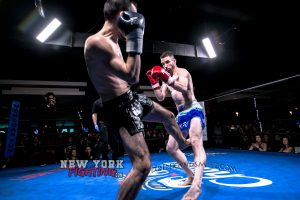 Roberts set the tone of the bout and immediately came with an incredibly powerful kick to the middle in R1, knocking Caporizzo facedown, and another kick knocking him to his back. Despite Caporizzo’s height advantage, Roberts reached up with powerful knees in the clinch. The sound of the men hitting each other’s bodies in R2 were intense powerful thuds against flesh. Roberts swept Caporizzo to the canvas but Caporizzo managed to get in a clean cross before he was swept again. Unfortunately he ate several body shots and was pressured on the ropes before he was swept once more. In R3, Caporizzo’s habit of checking with one leg and leaving the other heavy was to his detriment as he was swept several more times. Roberts took the win by unanimous decision after an aggressive 3 rounds. 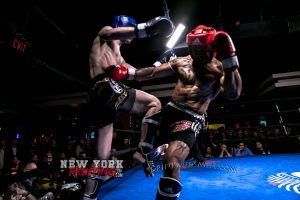 Cortez set the pace and cornered Lane immediately, coming in with short bursts of aggressive strikes. He then caught him in clinch several times as he worked the body with knees and punches. Lane got a few strikes in at the beginning of R2 but was cornered once again and pulled into Cortez’s clinch. He utilized his teeps to try to create some distance and keep Cortez away from him. Elbows briefly came into play but the men were back on the ropes in clinch by the end of the round. At the beginning of R3 Cortez came in with several hard body kicks and swept Lane to the ground. Lane was swept once more and was then teeped to the ground, but managed to land several punches to Cortez’s face. Lane put pressure on Cortez in R4 by kicking him to the shin causing him to fall several times, including a sweep that completely toppled him, and landing head kicks. R5 Lane got Cortez to fall again early on but the bout became vicious as both men turned to primarily boxing and clinch. The final 10 seconds was pure aggression as they fought to take home the title. To a packed house cheering “Juanito” and “Mucho Macho”, Cortez was crowned FNF Featherweight champ and was able to take the belt home. 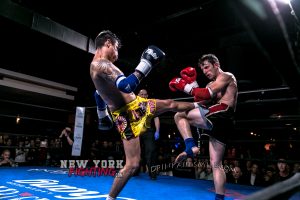 R1 highlighted Smith’s ringcraft as she moved D’Ambrosia around the canvas. The two were entangled in clinch early on R2. As they separated, the longer-legged fighters used their length to attack the other’s lower half. D’Ambrosia caught several of Smith’s kicks and used them to enter the clinch. R3 was very aggressive as Smith pressured D’Ambrosia with leg kicks to the midsection. The women found themselves on the ropes several times in clinch, even almost falling out of the ring at one point. Smith managed to toss D’Ambrosia halfway out of the ring with her clinch towards the end of R4 and kept the pressure on. R5  had them actually fall out of the ring out side of the ropes on the outer edge of the canvas, simultaneously exciting and horrifying the audience. It was a very close fight, with D’Ambrosia taking the win by split decision. 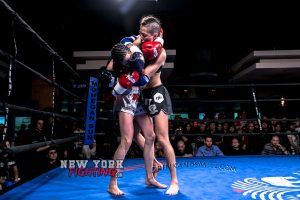 Right away in R1, Kang caught Canales’ kick, sweeping him as the men traded kicks. They entered clinch and Kang managed to topple Canales. Canales answered with a spinning back elbow and the two traded knees in the clinch. Kang dropped Canales once more as the bell sounded. The two traded vicious elbows in R2 as Kang pressured Canales and used his height to sweep him to the ground. R3 Kang highlighted a lot of pressure on Canales as he threw several elbows and strikes. The pressure was increased in R4 as Canales swept Kang and came in with a strong kick. Kang came back with his own strikes and managed to control the clinch. Canales put everything in R5 and hit Kang with a cross that made his stumble, but Kang ultimately took home the Welterweight title by unanimous decision. 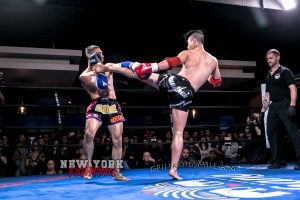 The pro battle started with Maldonado tossing Then and pressuring him with painful-sounding body kicks. Then got an elbow within the clinch and worked to sweep Maldonado. The men utilized their teeps in R2, but Then was able to get Maldonado to the ground. Maldonado returned with 2 crushing knees, effectively and obviously hurting Then. The pressure was on between the two men as Maldonado rushed in with several strikes to the face and body. They caught each other in clinch and Maldonado came with a spinning back elbow, but Then got his opponent back on the ropes once more. Then highlighted his ringcraft in R3 and had Maldonado circling around him while he entered a direct cross down the face. Maldonado finished the round alternating between Orthodox and Southpaw stance as he looked for openings. Curiously Maldonado fought in a western boxing style, ducking and weaving his head, a method generally not recommended by Thai boxers due to the fear of a knee to the face. It was tough R4 for both fighters as they battled for points. Then was working to seriously injure Maldonado’s legs as Maldonado focused on striking Then in the face and body. R5 was a huge emphasis on clinch, as Then would pressure Maldonado against the ropes in order to clinch-box with him. Maldonado managed a knee to the face and two spinning back elbows, but it did not deter Then from striking heavily, unbalancing Maldonado and preventing him from coming forward. After an action-packed and incredible fight, Then took home his first professional win. 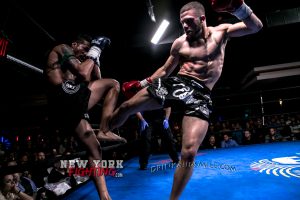 Win by: Split Decision-Geoffrey Then