“First off, I’d like to say that I feel very lucky to have a second opportunity to fight on a Glory card. I’m hoping this is my last amateur fight before I turn professional,” Andrew Ball says confidently. Polite, well-spoken, and friendly, Ball has been training for close to a decade and is ready for the next stage in his fighting career. He’s ready for Glory 33, which takes place Friday, September 9th, in New Jersey. 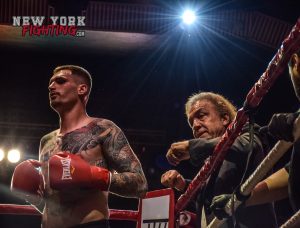 If anyone is prepared to transition to professional competition, it is Ball. With more than 25 fights under his belt, and a record of 8-2 in Glory rules, he feels like it is only right that he makes his next move.

Since he was 21 years old, Ball has been training with Lou Neglia, and promises his unending loyalty to his coach and promoter. “I’ll never leave his side. If there’s anyone who has gotten me to where I am today, it’s Lou.” 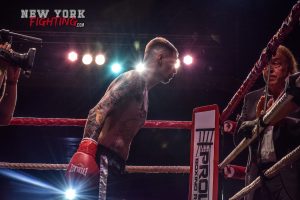 Respect to his Sensei

A quintessential meeting in a Long Island pizzeria spurred their initial contact, afterwards Ball began training private lessons with Neglia and then began training in Brooklyn at Neglia’s Martial Arts Academy. It was only 6 months later at 22 that he had his first fight, and even though it didn’t go in his favor, he says he received critical life experience. 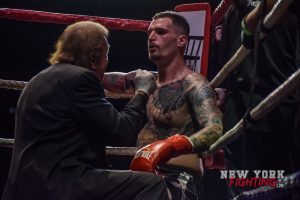 Andrew getting coached in between rounds by Lou Neglia

“With every win, every loss, you learn something and go back out there for the next one. I lost that fight but learned how to win the one after that.”

Those wins definitely have added up, and Ball recently competed on the big Battle of the Millennium III card in Brooklyn, winning by unanimous decision. In between training for his own fights, he is head assistant trainer at the academy and still teaches during his fight camps. Teaching and training year-round can put a lot of pressure of many fighters, but Ball handles it with grace. 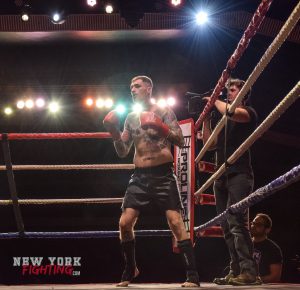 “I have a lot of goals, like eventually opening my own gym or competing down the line in MMA. Right now though, I want to have perfect kickboxing, before I concern myself with being a great all-around competitor. Muay Thai is my number one priority right now, and being elite in Muay Thai is what matters the most to me.” 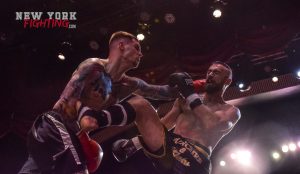 Even the most well-known fighters take a few weeks off in between bouts, but Ball jumped back into another fight camp almost immediately after Battle of the Millennium III to prepare for Glory 33. 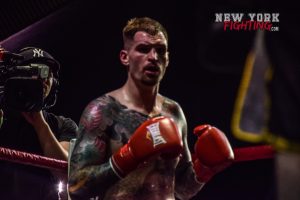 “Really, what I want to do is represent New York the right way–although I fight for myself first and foremost, I am that everyday guy you can meet in a pizzeria that makes things happen for themselves. I thought you had to be a superhuman to be a fighter, but now I know you just have to be someone who follows your dreams and isn’t afraid to work. You can’t compare yourself to others, you are on your own path to being a fighter and it doesn’t look like anyone else’s path. All that matters is that you stay to your path and not let anything get in the way.” With top notch sparring  with fighters like UFC’s Randy Brown, a host of wins, and another sure-to-be-remarkable bout on the upcoming Glory card, Andrew Ball really shows that he doesn’t let anything get in his way.

Check out Andrew Ball this Friday at Glory 33 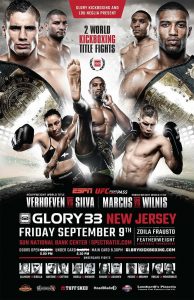