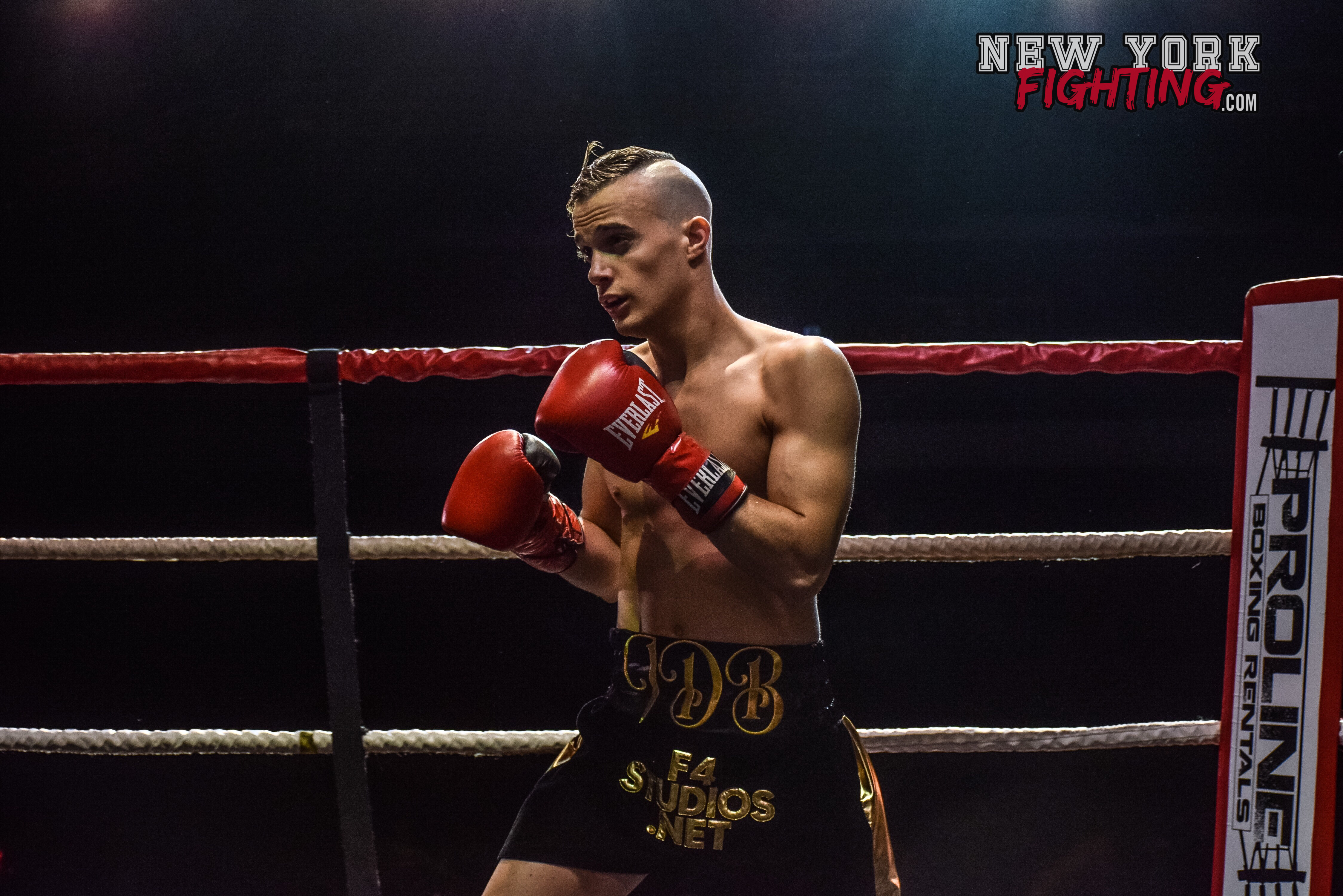 A quick Google search for Jonathan DiBella turns up a YouTube video touting the nineteen-year-old kickboxer as the “Future of Fighting.” DiBella looks to make good on that moniker when he takes on William Calhoun III, September 7th in New Jersey, on the undercard of Glory 33, which will be co-promoted by mainstay regional promoter Louis Neglia. 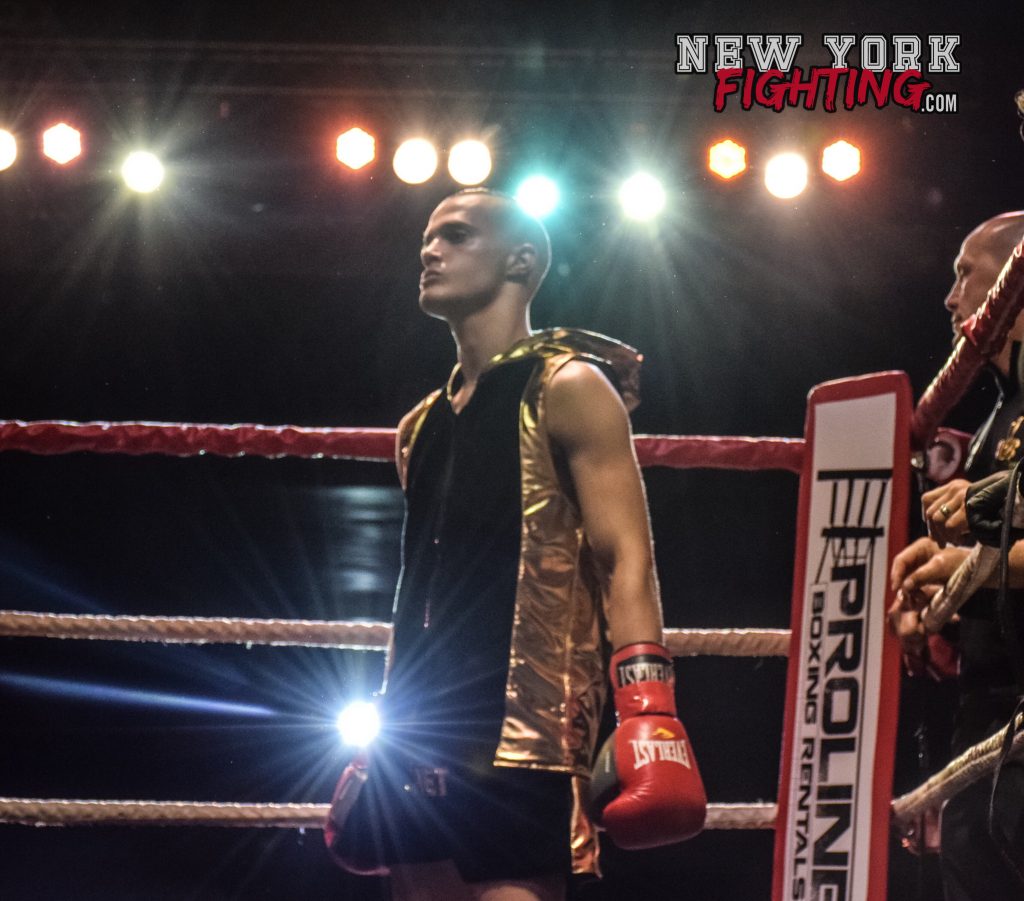 DiBella, who will be just twenty years old by fight time, holds a 1-0 record as a professional kickboxer, in addition to numerous wins as an amateur in kickboxing (12-0) and boxing (6-0). The son of famed Montreal kickboxer Angelo DiBella, the younger DiBella claims to have started his training at the age of two. “Even before that, I was always just on the mats, watching my father train his students,” he says. He was ten when he started taking it seriously as a career. “I had my first amateur fight at ten years old. And I took every fight seriously after that.” 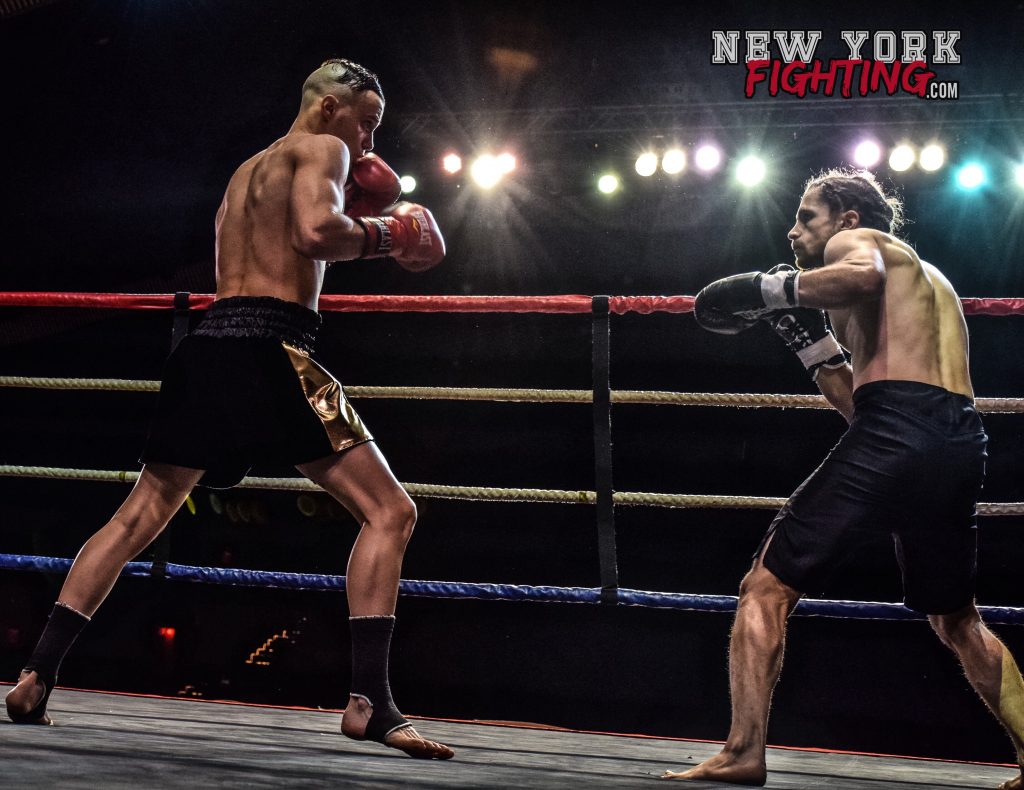 JDB feeling out his opponent

The last time DiBella stepped in the ring was his pro debut at Battle of the Millennium 3 in Brooklyn, on June 10, 2016, which was also co-promoted by Neglia. There he dispatched of David Weintraub with ease and style, dropping his opponent twice with left hands before earning the TKO from leg kicks in the second round. Although DiBella does not claim a certain “style” to his striking, he attributes his kicking skills to his father’s teachings. “My dad taught me Kyokushin Karate also, he was a Kyokushin Karate black belt as well, so he taught me those kicks and I’ve been practicing Karate a lot. I have a lot of sparring partners in Karate, so we practice all the kick drills a lot.” 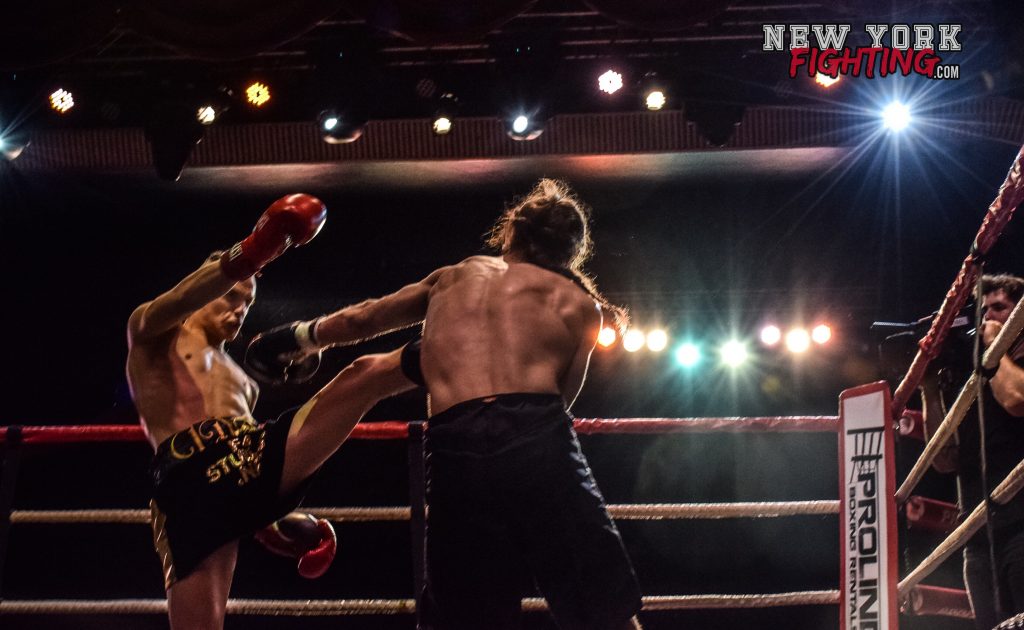 Kicks, however, are just one part of his game. “I do boxing training, of course. I also have an amateur boxing career, I did a lot of amateur boxing in Montreal.” DiBella’s crisp punching combinations have paid dividends in his past fights. “I’ve sparred with a lot of the pros in Montreal, a lot of the best in boxing, top ranked. I’ve been to every boxing gym in Montreal, and I try to spar with everybody.” DiBella believes his game is best characterized as a well rounded skillset, saying “I’m just overall skilled, I don’t know, I’m a more technical fighter.” 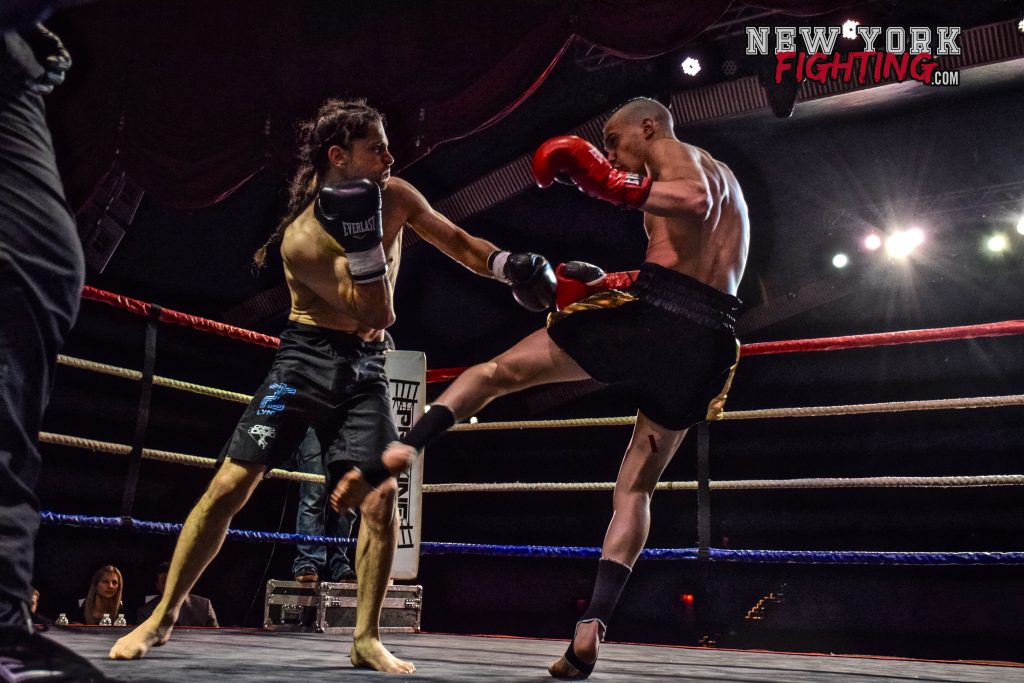 The young kickboxing prodigy, needless to say, is excited about fighting on the undercard of such a major event in the sport. “It’s my dream com true, you know, fighting in Glory, the biggest stage in kickboxing. I’m one of the youngest, and I’m the first person out of Quebec to fight for Glory. I’m proud of myself for doing this.” Nevertheless, DiBella has not been preparing specifically for his opponent, Calhoun. “I don’t know much about him. I’m ready for anybody, I train for everybody, you know, whoever they put in front of me.” 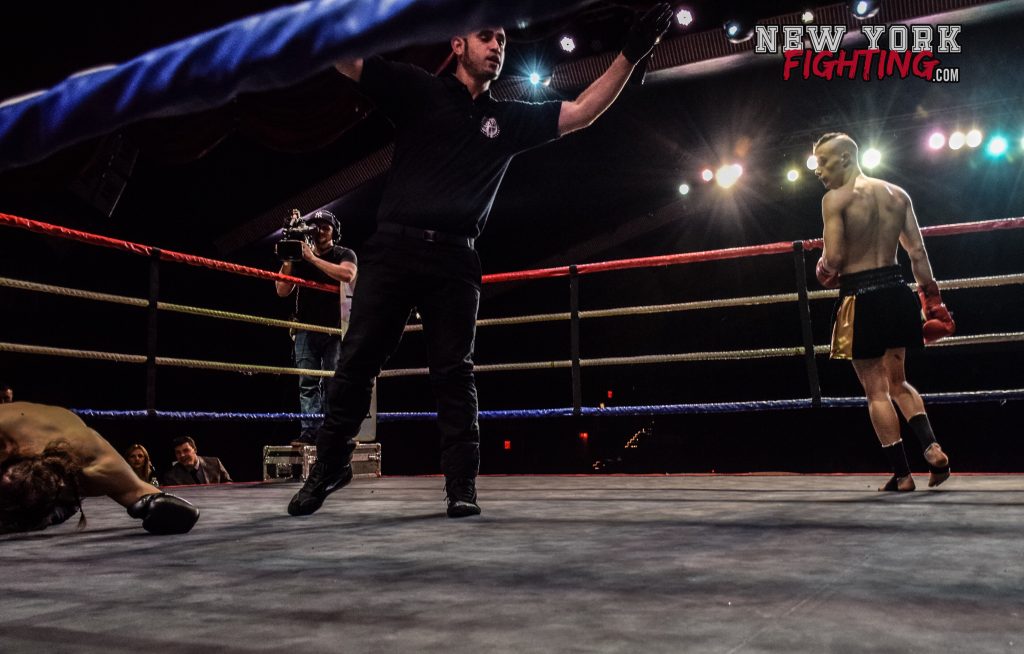 Another finish for Dibella

This is not to say that he is taking the fight lightly, as DiBella explains, “I heard that he’s a good fighter, and I’m just training really hard, extra hard, because I heard he’s really good. I heard that he’s one of the top MMA amateurs and kickboxing amateurs.” New York Fighting spoke to DiBella during a hard day of training, as he explained “I just finished my second training, I have one later, so usually it depends, two or three times a day.” Sundays are a rest day. 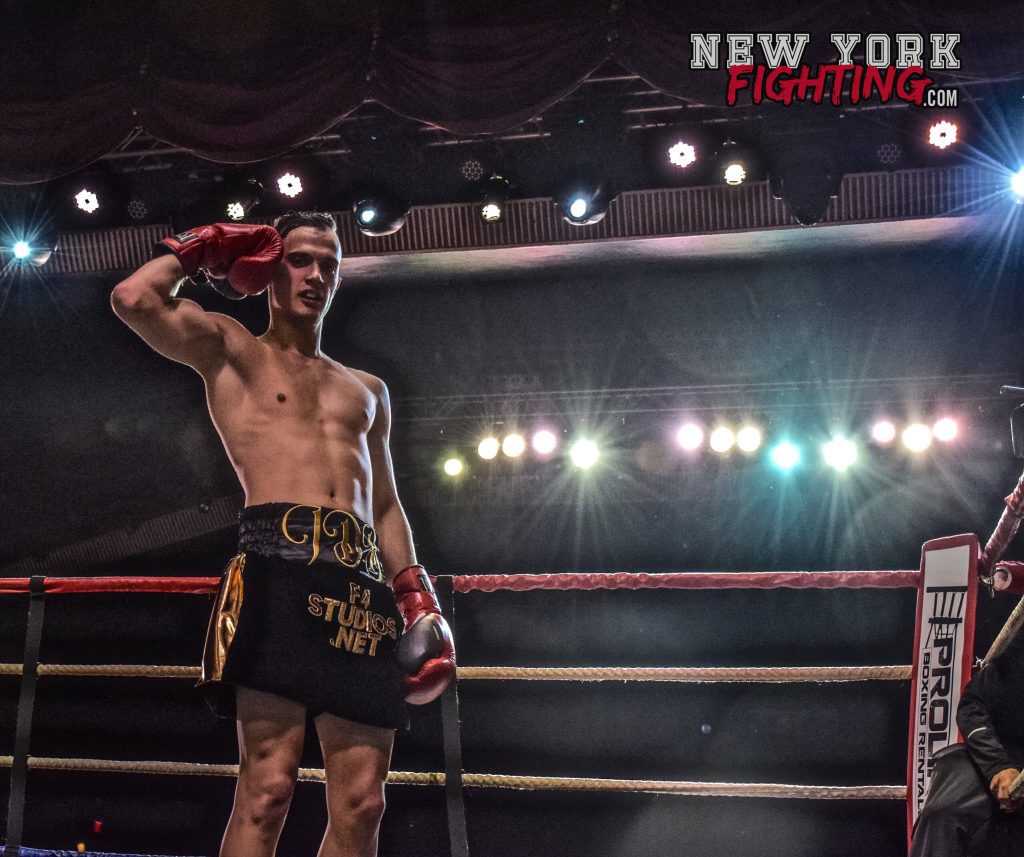 Although it is only his second pro fight, DiBella is already thinking long term. His goals? “Just become world champion and be successful with the sport, that’s all I want to be, that’s all I want to do, I just want to be successful and just keep on winning and see where it gets me. I want to go as far as possible.” DiBella admires and studies the craft of the best in the game. “I like Nieky Holzken and Giorgio Petrosyan, I follow them a lot,” he says, mentioning two of the best lightweight kickboxers of all time. “I follow Giorgio Petrosyan because he’s a southpaw like me.” 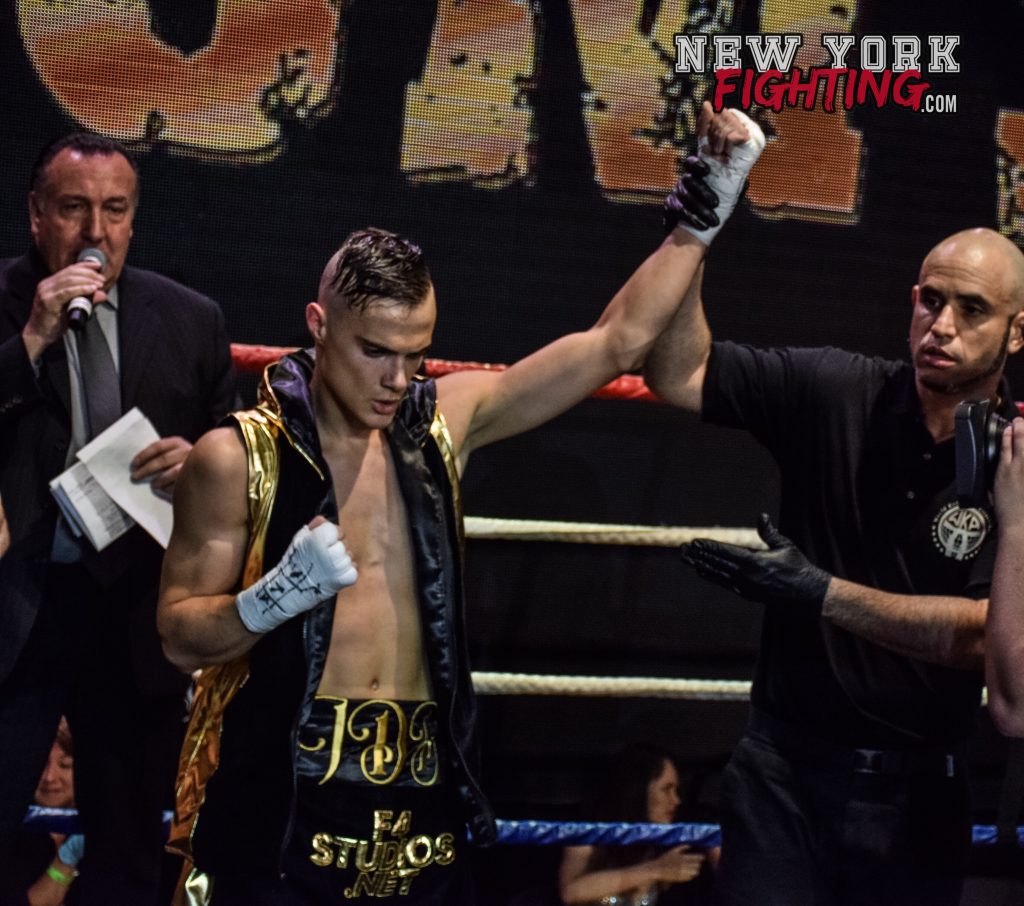 Victory in his pro debut at Battle of the Millennium 3

Jonathan DiBella will look to put all of his finely tuned skills to work on the September 7th Glory card in New Jersey. As a nineteen year old professional, he has been immersed in the kickboxing world for as long as he can remember. DiBella has, quite literally, been training his whole life for this, but does not seem to have adopted the swagger or overconfidence that accompanies other born-and-bred fighters, such as a Floyd Mayweather in boxing or certain members of the Gracie family in the early days of MMA. Asked what he predicted for the fight, DiBella explained, “No prediction, anything can happen in a fight. Anybody can lose. Anybody can win. Just go out there and do my best. I just think I have a strong mentality of winning, and that’s what I’m gonna do. I’m prepared for anybody.” 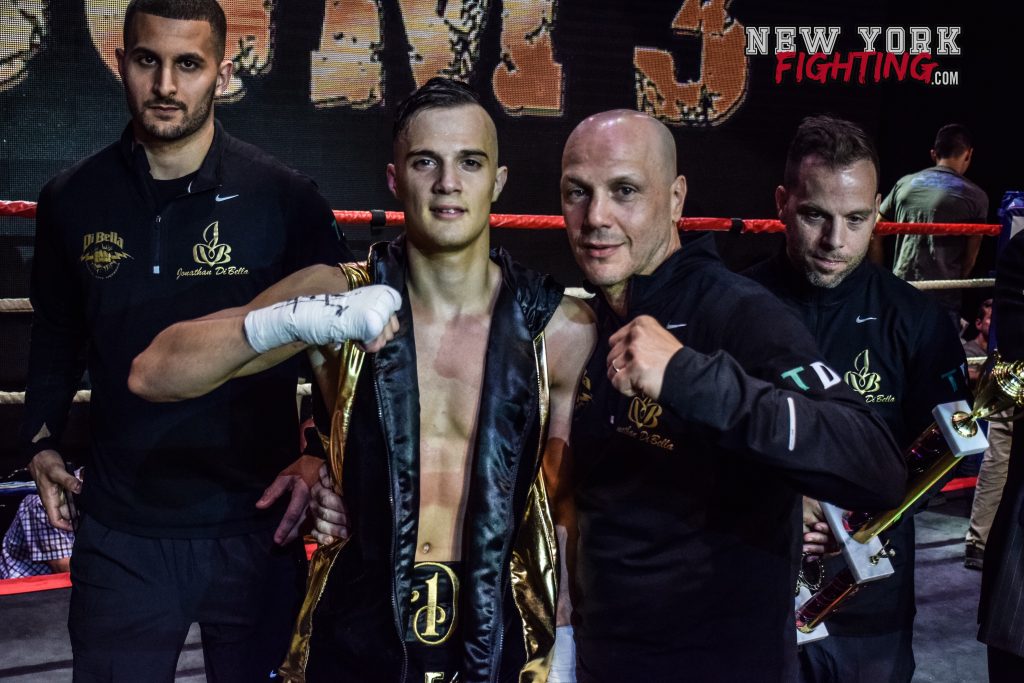 Jonathan with his Dad/Trainer, Angelo DiBella