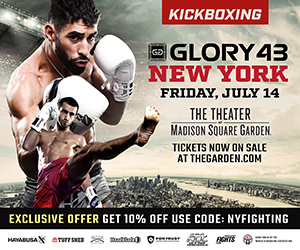 Catch GLORY 43 at Madison Square Garden on Friday, July 14, 2017. For an exclusive discount, use NYFIGHTING for 10% of your ticket purchase!

The final addition to GLORY 43 New York’s incredible fight card is Elvis “Super” Gashi (18-0, 9 KO) versus Josh Jauncey (26-8, 15 KO). It’s a tale of the U.S. against Canada for a fast-paced lightweight match-up that will rock The Theater at Madison Square Garden.

Both men have incredible records, with the Kosovo-born Gashi stacking a 107-3 amateur record and the GLORY 40 Copenhagen “Fighter of the Night” Jauncey finishing his opponents with brutal knees.

Tickets are available now at theateratmsg.com and at the Madison Square Garden box office, use NYFIGHTING for a 10 % discount. Local promoter Lou Neglia and Friday Night Fight’s Justin Blair are working with GLORY to bring the best stand-up to New York City. 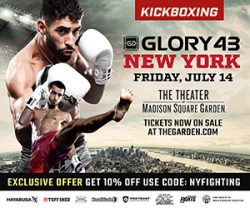