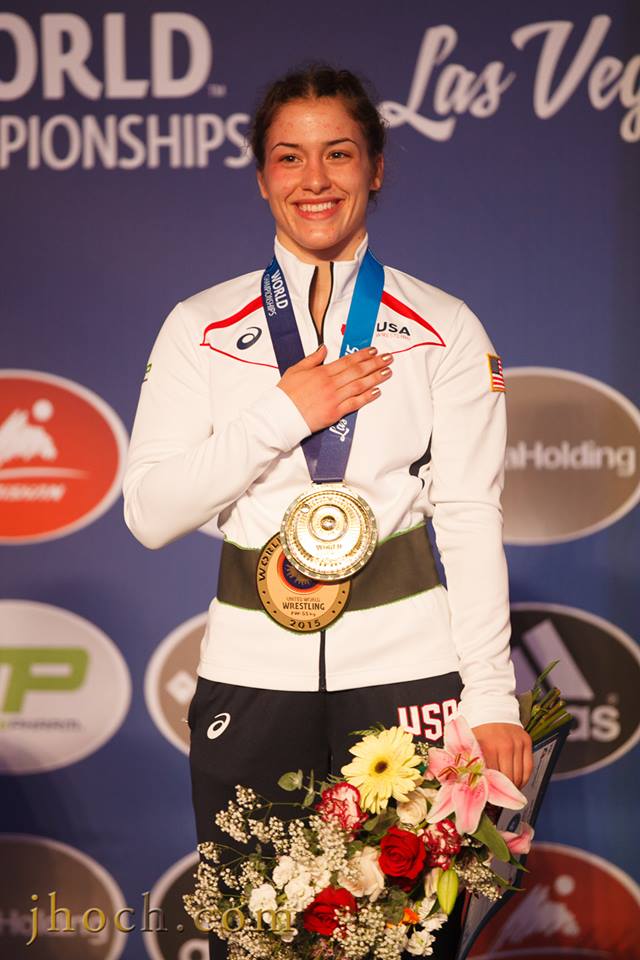 Helen Maroulis made history last year at the Rio 2016 Olympics as the first-ever American to win a gold medal in women’s freestyle wrestling, beating out the most decorated wrestler in history, Saori Yoshida. Since then it’s been a whirlwind of a year as she’s done everything from train with MMA fighter Conor McGregor to having her own documentary with FloGrappling, “Helen Maroulis: Girls Can’t Wrestle,” released only a month and a half ago. Now living in New York City and training at the New York City Regional Training Center, hosted by Edge School of Wrestling, Hoboken and Columbia University, Maroulis is already focusing on the next step in her career. 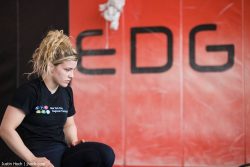 “I live here now,” the petite wrestler says, after a two-hour long training session at Edge Hoboken. She had spent her time alternating between Team USA Wrestling teammate Elena Pirozhkova and Georgian Olympic Gold medalist Vladimer Khinchegashvili. Maroulis only has enough time to shower, change, and grab something to eat before she has to prepare to come back for her second session of the day.
“I’m getting adjusted to New York being my home, but I really enjoy being here,” Helen says with a smile. “I’ve lived in many different places for my training and really just followed my coach wherever we need to go. I’m very happy about the program that is put together here and the people that I am working with. The program is amazing and the individuals who have put together are really just tremendous, I couldn’t ask for a better training environment.” 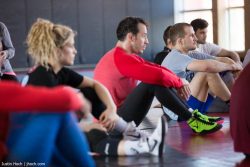 Maroulis is in great company. Famed coach Kendall Cross, distinguished Olympic Gold medalist Jordan Burroughs, and world champion Logan Stieber all train and/or coach at the RTC facility. Edge residents David Esposito and Jeffrey Marsh, highly sought-after wrestling coaches to MMA fighters and professional athletes, help to manage the program and work with the wrestlers to prepare for their upcoming events.
“It’s been a real pleasure having the NYC RTC here at Edge Hoboken,” Marsh says as he beams at the Olympic team. They shake his hand as the team discusses the upcoming Beat The Streets wrestling event, which Helen would go on to win, having made another place for herself on the US World team a few weeks prior. 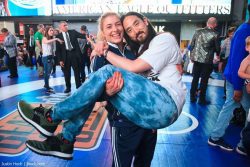 Most importantly to Maroulis, however, is that she is with her long-time coach Valentin Kalika. While she is being interviewed, he waves off the rest of the team and waits for her downstairs.
She goes on to say, “Valentin is like family to me. He’s an amazing role model and coach. A lot of credit goes to athlete–they congratulate you and give you the medal and put a lot of attention on you, while the coach doesn’t get a medal or really any kind notice sometimes. I’m the one carrying the flag, but he’s one of the main reasons why I got there. It’s just crazy because it took everything for both of us. We both made tons of sacrifices and had to give up a lot to get there. For him to do that without receiving any of the glory that the athlete gets says a lot. I’m so thankful for everything he has given me and how he has always supported me. He loves me if I win, and he would love me if I didn’t. That’s the most important–that’s a relationship you would have for life. It’s not a business, it’s a journey that we’ve been on together.” 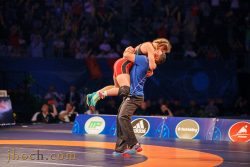 The Olympian’s wrestling journey began several years prior, when she was only 7 years old. Used primarily as a dummy for her brother to practice on, Maroulis was intrigued by the sport and wanted to continue for herself. While she spent a majority of her practice and competitions wrestling against boys, she persisted to make it on the Senior World Team at only 17 years old. Despite being one of the first women to achieve four national titles in college, she only qualified as an alternate for the 2012 London Olympics.
It was shortly afterward that she made the 2012 world team, but it was when she met Kalika in 2014 that things really started to pick up for her. Maroulis then demolished her first World Championship, outscoring her opponents by 35-0. While she had lost to Saori Yoshida twice before, she refused to enter the 2016 Olympics with anything but a champion’s mindset. 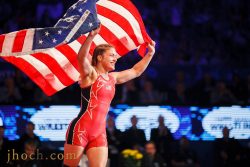 “I worked on my mindset separate from my ranking that I had,” Maroulis says firmly. When talking about that match, her eyes become laser-focused and she stares straight ahead, as if reliving the moments in her mind.
“Granted, I was going against Yoshida. I had won Worlds in 2015 but I was still probably the underdog because I had never won before. My mindset was that of a champion, regardless of my results. I told myself I was going to win, so I competed like I knew I would.” 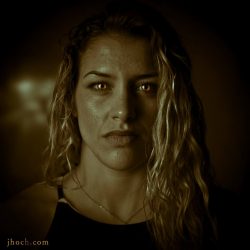 Now 25 years old, Maroulis reflects on what brought her to that moment, growing up as a young female wrestler that had to wrestle boys in order to compete.
“Well,” she starts almost hesitantly, “The sport has changed tremendously. Women have the same amount of weight classes as the men, and I’ve seen that the respect towards women has increased tenfold. There’s been many positive and productive improvements in wrestling. I’m very happy to see it happen.”
“But,” Maroulis continues, making it clear what she’s going to say is necessary to be said, “There’s a lot more to do. I think adding more women’s programs would be incredibly beneficial and implementing them in high-schools and afterschool programs. Let the women train with men instead of worrying about separating them. We can all learn from each other and benefit one another.” 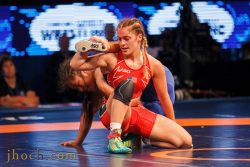 The Olympian takes her responsibility of winning the gold medal seriously and wants to be a realistic champion for all the young women who are watching her. She maintains a blog on her website and frequently publishes articles on various outlets in which she discusses her fears and triumphs as an Olympic athlete.
“I really value authenticity and honesty. I think that’s very important for girls to see that. Growing up, I didn’t identify with any champions. They all seemed tougher than me, stronger than me, and not someone I could really relate to,” Maroulis says.
“I had a lot of struggles and even as I was improving, my mentality something I was constantly working on. I was always that person while I grew and I want other girls to see that you can be a champion even if you have those thoughts in your mind.” 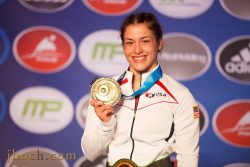 The wrestler admires how other female athletes have conducted themselves in their respective sports.
“I’ve allowed myself to feel pressures but I don’t think anyone has put that pressure on me,” she muses thoughtfully. “After the semi-finals of the Olympics, I told my good friend, ‘I know I’m going to win. I know I’m going to win the Olympics. But, I’m afraid I’m not ready for the responsibility.’
“So that’s something I felt from the start. You don’t win just to do whatever with it, you become a role model and that’s something you have to really give your all to. I think a lot of women have upheld that before me, no matter what level or sport they’re at. There’s a responsibility to do something with that. I look up to all the women on the Olympic team, especially from the last few Olympics. I look up to my teammates and coaches, particularly Elena as she has inspired me so much. I look up to Yoshida–she is an amazing athlete and person, and taught me what it means to carry myself as a champion. I’ve been lucky enough to meet Serena Williams and Ronda Rousey, both great female role models that are doing amazing things. I want to be someone that others can look up to and connect to.” 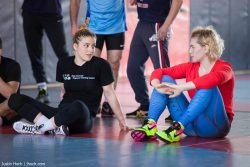 As Maroulis continues to sit patiently despite the interview taking away from the few precious moments she gets to herself for the day, she keeps in her hands in her lap and her elbows tucked in. When a wrestler is trying to push themselves off the mat, they pull their elbows in before they bring their body up. Controlling the elbow is an important strategy and can be used as an effective set-up for a takedown. It’s clear that wrestling is always on Helen’s mind. 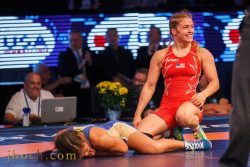 When asked about what she will do next, she takes in a deep breath and then sighs, allowing her elbows to pop out and rest on the outside of her legs.
“You know, I’m just taking it day by day. My focus now is on World Championships and winning that. But also, beyond my own personal endeavors, I’d like to be a great role model for the other women who love wrestling. We get so many messages about what being a ‘champion’ is, but it’s hard to see that in ourselves. I want girls to know that being a champion doesn’t mean you have to be fearless or invincible. It means you are willing to work hard, sacrifice, and give it all you’ve got. That’s the message I’d like to leave behind.”