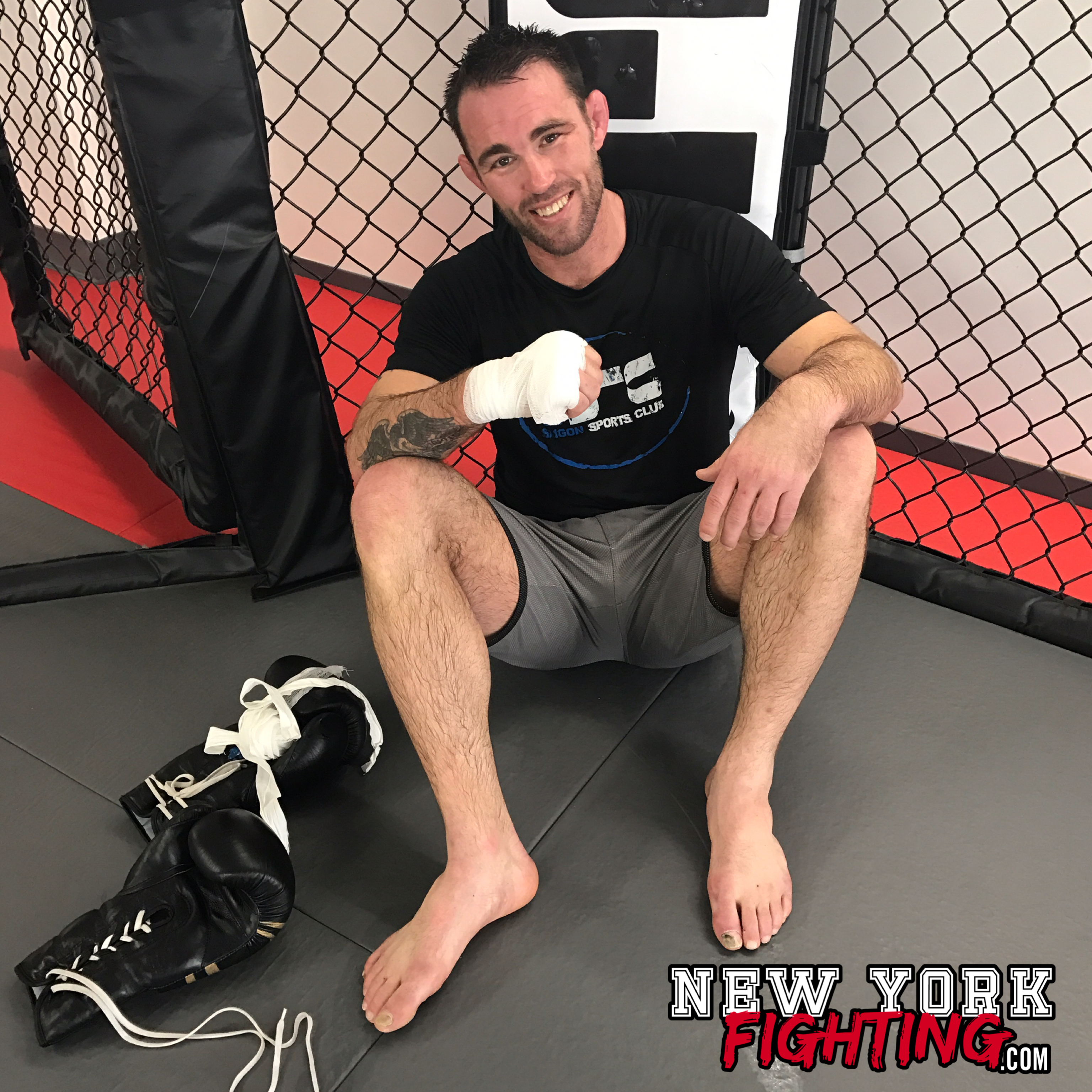 Jake Shields has been in the game for a very long time. A black belt under Cesar Gracie and a newer addition to John Danaher’s blue basement-dungeon, the experienced fighter continues to compete at a high level. While some athletes look to hang up the gloves the closer they get to 40, Shields is going strong and training several hours a day at the age of 38. 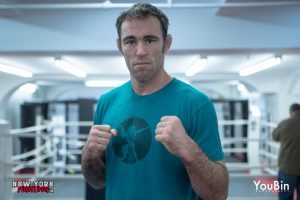 photo by You Bin @youbinphotography

Most recently fighting for World Series of Fighting, or as it is called now, The Professional Fighters League, the UFC vet has wins over some of the greatest fighters of the last 20 years, including Dan Henderson, Robbie Lawler, and Demian Maia. The former Strikeforce and Elite XC champion is now looking to improve his record to 2-0 for FloSports and Chael Sonnen’s Submission Underground 4 this upcoming Sunday. 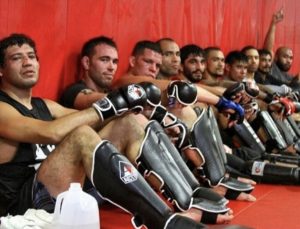 A wrestler since elementary school and NCAA Division II competitor, the All-American seamlessly transitioned into JiuJitsu, taking third place at the prestigious ADCC trials and gold at PanAms.

He’s dubbed his style “American JiuJitsu” as he says of wrestling and BJJ, “They’re both grappling arts, they’re both very similar. Some wrestlers are stubborn because they don’t want to go on their back, but as long as you’re open-minded and can relax and can learn to combine them, it’s really simple. It’s been easy for me to pick it up because I’m open-minded and have been able to mix them together.”

Shields foray into fighting began with training at UFC Hall of Famer Chuck Liddell’s SLO Kickboxing Academy. From there, the Californian started training with Cesar Gracie as well as Nick and Nate Diaz, and Gilbert Melendez. Despite staying close with his West Coast team, Jake also travels to the East to train with John Danaher and the Danaher Death Squad at Renzo Gracie Academy in Midtown Manhattan. 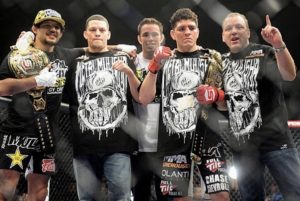 “There’s a lot of differences,” Shields says of his two camps. “Cesar Gracie’s is still my fight camp but I wanted to make some changes technically. Sometimes after a few years of learning, you feel like you’ve plateaued but I wanted to come out and learn some new techniques. Working out of Renzo’s, I’ve gotten some real great Muay Thai training here with Joe Sampieri and his team, as well as great training in the basement with John Danaher and his squad. I also do wrestling at Edge Hoboken in New Jersey and training with those guys has been really good for me. I think it was great for me to come to New York and be able to learn Muay Thai, JiuJitsu, and wrestling separately.”

One of his training partners is his former opponent, Georges St-Pierre. Despite fighting each other in the past, they work together as friends and teammates to improve one another’s skills.

Shields says, “Martial arts ultimately is a sport of respect. You want to respect your competitors. I mean there are some fighters that don’t like each other, and I don’t like everybody but overall we get along. There is a lot of respect for one another. GSP is someone I’ve always respected, even before I fought him. He’s one of the greatest of all time, so it’s been an honor to train alongside him.” 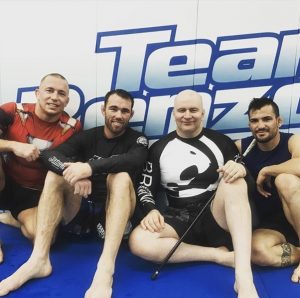 One fighter that Shields doesn’t appear too fond of is the person he’s facing on Sunday: Dillon Danis. Well-known as Conor McGregor’s training partner and recently signed to Bellator, Danis and Shields have been trading blows on social media. Right before McGregor and Nate Diaz’s rematch at UFC 202, their teams threw drinks at one another and famously tore apart their press conference, much to dismay of UFC President Dana White. Despite (or maybe due to) the bad blood, Shields has been training viciously for the match.

Edge Hoboken’s wrestling coach Kody Hamrah works specifically with Jake and believes that Shields will give Danis a difficult time. 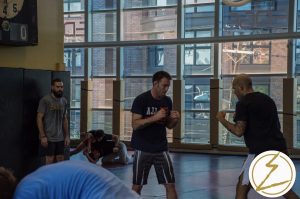 He says, “Jake is really a tough guy. His wrestling experience will definitely be on display. He’s really calm in tough situations and his mentality has always been very clear. Especially in an interesting match like SUG 4, where they can use the cage for takedowns, I expect to see some of Jake’s MMA experience make an appearance.”

Hamrah trains many elite-level athletes and professional fighters but finds Shields to be one of the friendliest people he’s ever worked with.

“Jake is one of the nicest, most humble guys around. He’s always open and easy to teach. He wants to learn, that guy is like a sponge–that’s why he’s been so successful. Whether at grappling or MMA, he continues to grow as a fighter and a person. He still has a ton of potential with everything, and I think that he’s just going to get better and better.” 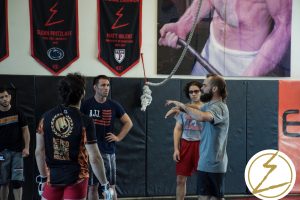 Shields has always been a much sought-after opponent. After several years of it being discussed, he finally was given the opportunity to fight Jon Fitch in Madison Square Garden on New Year’s Eve for the second-ever professional MMA bout in NYC for WSOF. Unfortunately, he wasn’t able to dethrone the champ. 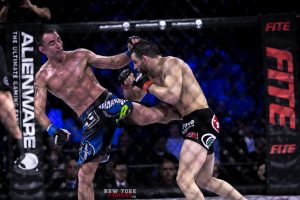 “Well,” he says, “It was a great card. In person, I felt a lot that night. Fitch came in and fought a great fight. It wasn’t a good night for me, but overall it was a great event and was really exciting to fight in New York. I enjoy fighting for WSOF. They treat me great. They’re a new, growing, and changing company still, but I have no complaints. I’m happy to be there.”

His circle is tight with people who he’s worked with and trusted for much of his career. Who are the people he thinks has pushed him the most?

Shields says with a laugh, “That’s hard to say because there’s been so many people that have inspired me. Chuck Liddell was my first role model, he was the one who got me started. The Diaz brothers have been my main training partners over the years and have always been there for me. John Danaher is a new coach for me, and someone I’m really excited to learn from. They all have different things to offer.” 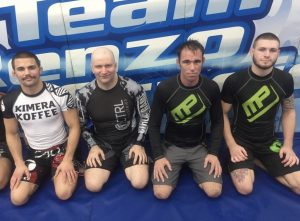 His loyalty and dedication make it easy to understand why he has been able to work with the same teams for so long when many fighters change camps after a few years. As Shields prepares for his upcoming bout, he reflects on why he still trains to compete, despite his many titles and wins. “I love this sport, I love the competition, I’m a little older so I probably wouldn’t fight too much longer. It’s surprising that I still enjoy it after all these years. I mean, there’s times you feel a little burnt out, but every time I feel like that, I take little breaks and it just motivates me.” 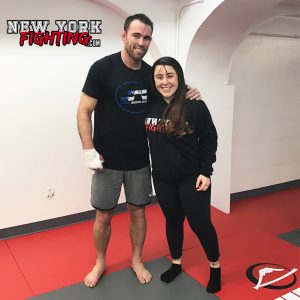