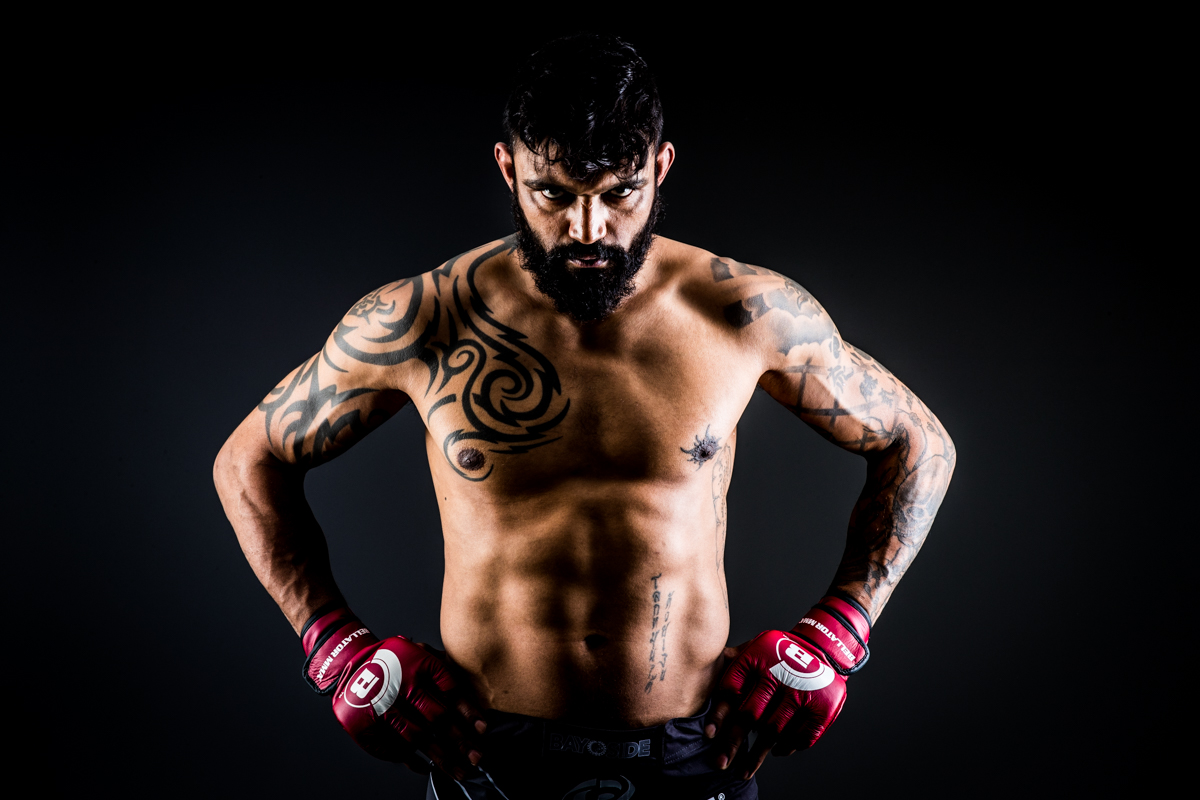 It wasn’t to visit family or to take a vacation, however. The 6’6 fighter boarded a plane earlier this week to head from New York to City to England for Bellator 179. The card is sure to please, with the long-awaited Bellator debut of the “Red King,” Rory MacDonald. This event means something different for McGeary, however–if he wins his bout versus Linton Vassell, his next fight might be a chance to regain the Bellator Light Heavyweight Championship.

Charming and funny, McGeary isn’t afraid to poke fun at himself or others around him. Wisecracks abound and, possessing a subtle sass, he could be a part-time comedian if he chose to. Despite his frightening height and physical stature, he comes off as more of a massive teddy bear than a professional fighter. His loss of the belt to Phil Davis is the only stain on an otherwise perfect record. With 13 fights altogether, McGeary holds wins over notable opponents such as Tito Ortiz. His last fight against Brett McDermott was stopped in the second round with a win by TKO. Beyond his amiable personality, Liam is tall, lean, and dangerous. He comes to win his fights, not just survive them. 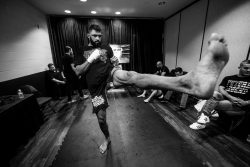 Born in King’s Lynn, Norfolk, England, the 34 year old started training 8 years ago in the Bailiwick of Jersey after bouncing all over England for a few years. He had been a scrapper–brawling in bars before he was competing in cages. McGeary’s passion for fighting had been around since he was an adolescent.

Over a cup of coffee, he says with his trademark chuckle, “I had always been interested in fighting. I tried some boxing when I was 13, but I wasn’t very good. I kept getting punched in the head. The coaches told me, ‘You’ve got potential.’ I asked them, ‘What does that mean?’ and they responded, ‘Well, you keep coming back.” 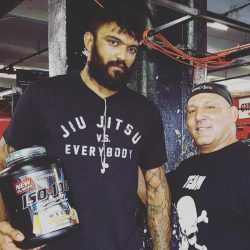 While his brief boxing stint as a teenager didn’t seem to work out, McGeary pursued Jiu Jitsu when he got older. He started training at Gracie Barra Channel Islands and competed in a few tournaments. In 2010, a kickboxing win in Andover, Hampshire pushed McGeary to turn pro and he was picked up by Bellator just three years later.

“I was mad keen to start fighting,” McGeary says. His eyes light with excitement as he talks about the sport he loves. “I was always involved in some violence–but it wasn’t legal violence. I wanted to turn things around, do things properly, and make a better life for myself. I just wanted to pay my dues. I was fine to live off a sofa to be able to fight.” 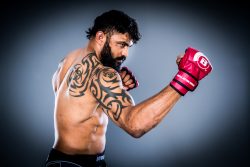 After finding himself on the East Coast, the Light Heavyweight started making friends with those who would become the most important people in his life.

He recalls, “I was set to go for my Bellator debut and went to a seminar that Renzo and Rolles Gracie were at. They invited me to go to train with them and a few days later, I was at the academy. I had always been in Jersey, I never even had been to the city before. I got on a bus from Tom’s River and managed to find my way in.

I was a little starstruck, because I saw all these people on TV. I was still starting out and didn’t know too much of what I was doing, but they helped me to figure it out. The level of commitment was impressive–these people focused on every single detail about their fighting career. They took it seriously and built a structure for themselves that I was able to understand and incorporate for myself.”

That structure includes focusing on all the aspects of his training, from Jiu Jitsu at the Renzo Gracie Academy, to striking at Church Street Boxing with Jason Strout, to his wrestling at Edge Hoboken and with Gerardi Rinaldi. 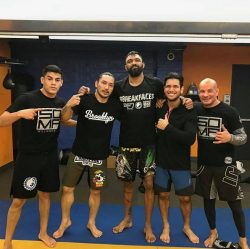 McGeary believes that “It’s good to train each individual discipline and understand what you’re doing. I have the best coaches possible for each aspect of it, and I’m confident to go into every fight knowing I have the best technique possible.”

A regular training begins early in the morning at Gracie’s academy with an open mat under John Danaher. From there, McGeary catches the train to Church Street and works until the early afternoon. A trip home and a brief nap later, he ventures back into the city to work with his strength and conditioning coach. 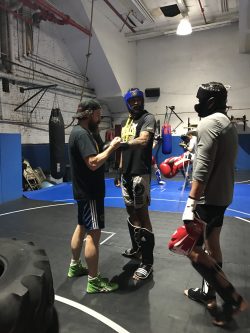 “You have to be selfish in this sport,” Liam says firmly. “You have to concentrate on yourself and be selfish with your time if you want to succeed.”

Only another fighter could truly understand this mentality, and so McGeary spends most of his day with his team. He finds himself closer to them than he is to anyone else.

“I have the best teammates,” he says. “We all push each other. We support each other–everyone helps everyone else get better. I thoroughly enjoy being a part of the Gracie family. Rolles Gracie was someone who helped me when I was having a rough time when I first moved here. It goes to show the level of friendship I feel at the academy, because they have always been willing to help me and support me.” 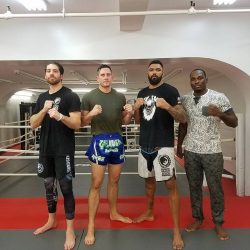 Despite the exciting experiences the fighter has had by virtue of being one of Bellator’s top stars, he occasionally gets homesick.

McGeary says, “I always lived in places for 4-5 years at a time. But now I’m starting to miss my family and friends. They’re 8 hours away by plane, which can be tough. Any time after I’m fighting, I go straight home and bounce around my old haunts. But in the meantime, I came here with a goal and I want to achieve my goal.” 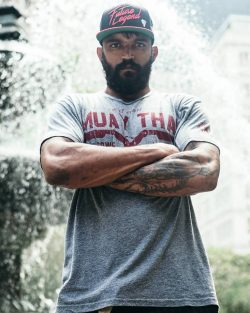 He’s happy to be under Bellator’s banner but fighting isn’t what drives him–winning does. After this bout in London, Liam is focused on getting his title back. He’s learned from his loss and recognized where he made mistakes. What went wrong wasn’t lack of preparation, but lack of rest and a too-early fight camp.

He says, “I blew myself with overtraining. I just did over did it. I had 14 months away for an injury. I knew I was fighting Phil Davis, so I couldn’t train as well as I wanted to. Once I was able to train, I tried to cram everything in–for 14 weeks, I was leaving at 6 am and getting home at 8 pm, after training all day. After 8 weeks, I felt amazing. And then I realized, ‘Holy shit, I have 6 more weeks of this.’ By the time I got to the actual fight, my body was so exhausted and I couldn’t do what I wanted to do. I overdid it. I made a mistake. Everyone has a bad day at work. I just happened to have a bad day at work on the day I had to defend my title.” 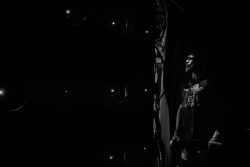 While the belt is in his immediate plans, the focused McGeary is utilizing his fighting to build his future.

“As long as I get a house out of this, I’ll be happy,” he says with a laugh. “I want to take something away that I can keep. I’m getting older now and this is my future I’m thinking of. These are the things I need.” 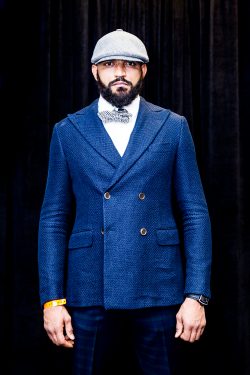 McGeary attributes his cheerful demeanor and easygoing attitude to fully enjoying what is the experience of a lifetime. The fighter says, “I’ve had a great life so far and I’m still going. I just enjoy myself. Life is too short to be miserable all the time and not doing what you want to do. I’ve got great people around me and loads who support me. Coach Jason Strout has been a big part of my life and has helped me very much to be a better fighter. My grandad was the one who made me the man I am today. He always told me, ‘Be decent.’ I never forgot that. I always tried to live by that.”

As he packs his things to go to his next training session of the day, McGeary says more to himself than me, “I’m going to get belt back and from there, I’ll figure out what’s next. I’ll be sitting poolside in the sun with my belt wrapped around my waist.”

I had to ask–“Would you you really do that?”
Liam bursts into laughter. “No, I’d get horrible tan lines.”