Merab Dvalishvili: All the Way from Georgia 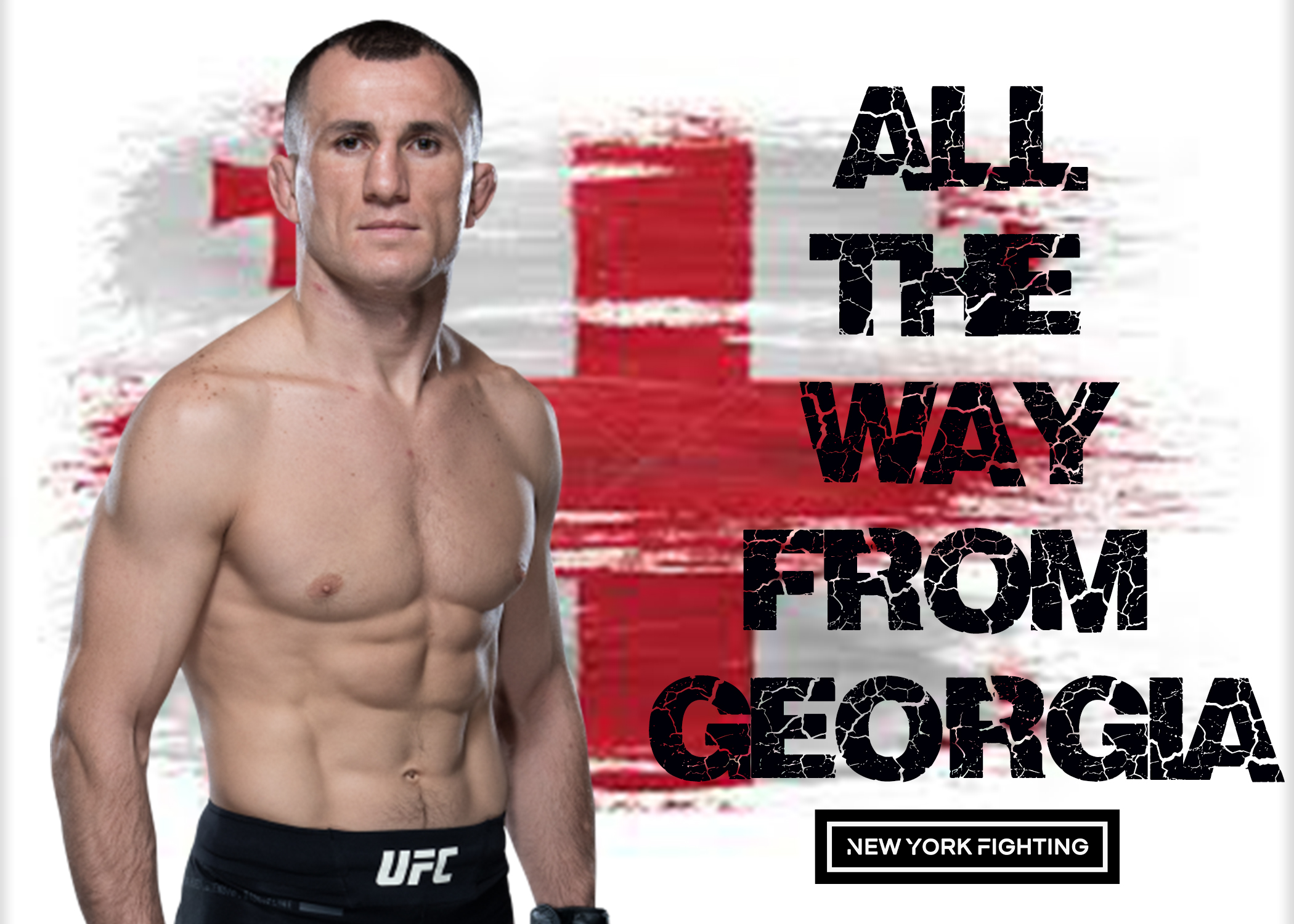 All the way from Georgia. No, not that Georgia. Georgia, a country at the intersection of Europe and Asia, is a former Soviet republic that’s home to Caucasus Mountain villages and Black Sea beaches. It’s famous for Vardzia, a sprawling cave monastery dating to the 12th century, and the ancient wine-growing region Kakheti. The capital, Tbilisi, is known for the diverse architecture and mazelike cobblestone streets of its old town. It is also known as the home country for surging bantamweight UFC fighter, Merab Dvalishvili.

Dvalishvili, 29, who hails from Tbilisi, has made his way to America to chase his dream as an MMA fighter and ultimately a UFC champion. Merab got his big break fighting out of the Ring of Combat organization, defeating Raufeon Stots on June 2, 2017, Dvalishvili was awarded a UFC contract as UFC President Dana White looked on while filming his highly popular show, “Dana White: Looking For A Fight.” 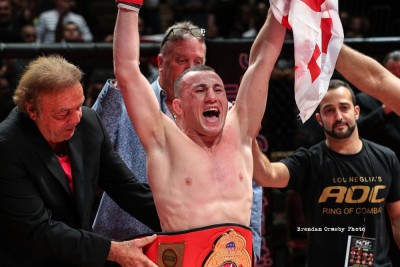 On that night, Dvalishvili knocked out Stots in 15 seconds via spinning back fist and sent everyone into a frenzy.

Fighting out of the Serra/Longo Fight Team, it was that night where his life changed.

As we fast forward three years, Dvalishvili has seen his ups and downs. He lost his first two fights in the UFC, including a controversial loss via split decision to Frankie Saenz in Fresno, California, and then to Ricky Simon in Atlantic City via guillotine choke. However, that fight earned him Fight Of The Night honors and propelled him to new UFC heights.

“I wasn’t comfortable in Fresno in my first UFC fight. I wasn’t sleeping well, I had the flu and I didn’t feel like myself, said Dvalishvili. It wasn’t until my second fight in Atlantic City, I felt more at home with so many friends and family being able to see me live, that I started to feel like myself again.”

While the result in Atlantic City didn’t go as planned, Dvalishvili seemed to leave there a changed man and fighter as he has rattled off four-consecutive wins to go 4-2 in the UFC and now is a name that no bantamweight wants to deal with inside the Octagon. 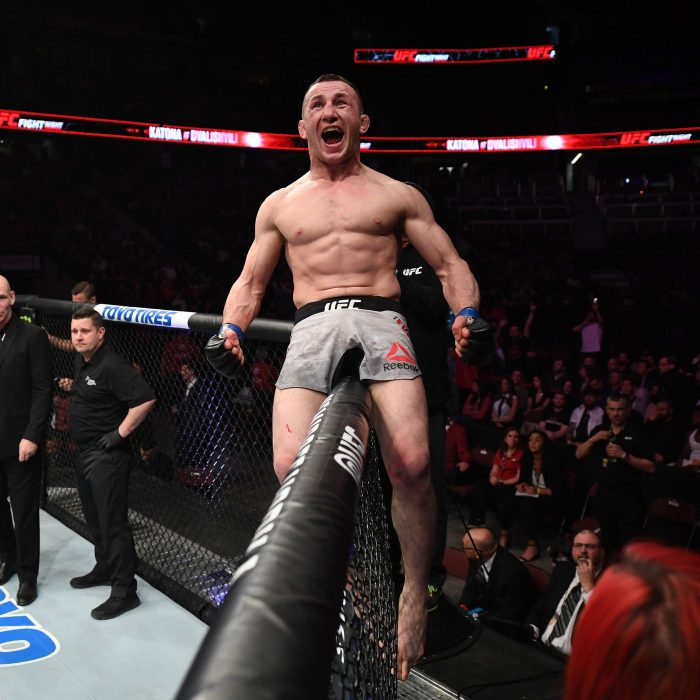 Lopez who took the fight on short notice after Dvalishvili’s opponent, former flyweight title challenger, Ray Borg, pulled out due to family reasons, was sharp and held his own. It didn’t matter. Dvalishvili broke his own record of 12 takedowns and easily won the fight.

“It was a little difficult to prepare for Lopez after training to fight Borg… I knew Lopez had knockout power, but I just trusted my abilities and I always adapt to the situation, said Dvalishvili.”

A tireless worker, Dvalishvili has garnered the nickname “The Machine” from his training partner and current UFC lightweight Matt Frevola. 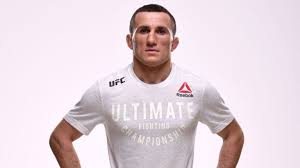 “It was Matt who started calling me ‘The Machine.’ I am always working hard at the gym, trying to get faster and stronger. It just stayed and now everyone calls me it, he said.”

Frevola isn’t the only UFC fighter he trains with. Dvalishvili  trains out of Serra/Longo Fight Team at LAW MMA in Garden City, New York, which has quite the track record with former champions and fighters on the rise. Matt Serra, who arguably had the biggest upset in UFC history, defeating Georges St- Pierre for the welterweight title, corners Dvalishvili.

“I learn so much everyday from them, said Dvalishvili. We have fun and obviously their track records speak for themselves. Everyday we go hard and everyday we all get better. I wouldn’t change it for the world.”

Coming off his most recent win, Dvalishvili called out rising bantamweight, Sean O’Malley, who just won his last fight via a walk-off KO over Eddie Wineland, and has become a household name in the UFC community.

However, O’Malley has not accepted.

“This is MMA, said Dvalishvili. He most likely is afraid he won’t be able to strike with me because I will take him down to the canvas. In MMA we use all different techniques and O’Malley is definitely on my radar and I hope he does accept the fight.” 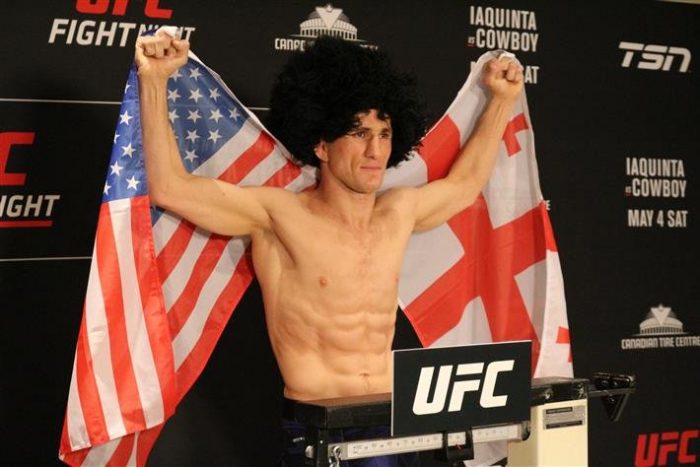 While Dvalishvili waits for his next opponent, riding high on his four-fight winning streak, he already has come a long way.

Growing up in the country of Georgia and acclimating himself to a different country while learning a new language definitely was not easy.

“I have taught myself English and I am getting better everyday, said Dvalishvili. Guys help me and now I am fluent. I love Georgia and I go back any time I can, but America is great. America allows me to chase my dream and that is to fight, earn money and ultimately win a championship belt.”

Dvalishvili, a soft spoken man, lets his work ethic do the talking, but when asked if he could have dinner with anyone dead or alive, his answer would surprise some.

“Mike Tyson, said Dvalishvili. I would love to pick his brain. He is so talented and has been through a lot.”

Keeping with the boxing theme, Dvalishvili noted his favorite song to pump him up while he trains is any song from Rocky and his favorite movie is Rocky 4.

Will all the love for boxing translate for the fighter who owns the most takedowns in a UFC bantamweight fight to more of a striking oriented style?

“I adapt to my opponents, said Dvalishvili. I believe in all of my skills and I’m working on everything that I need to be the best in the world.”

One thing is for sure. Dvalishvili has definitely traveled the world and the UFC and Long Island is glad he did.