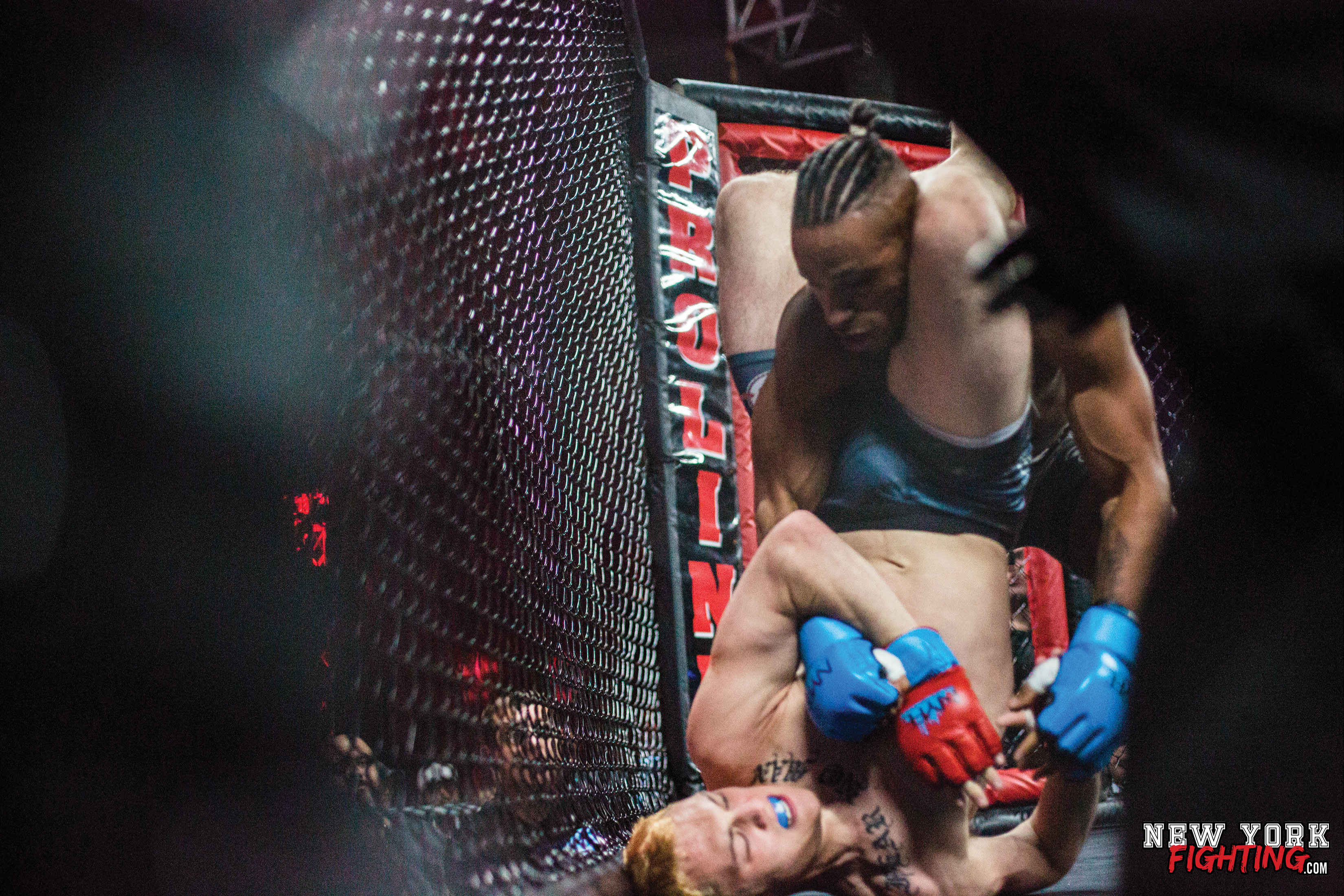 New York Fight Exchange 15 was held September 16th at Amazura in Jamaica, Queens. In attendance was a television crew, scouting fighters for former UFC Light Heavyweight champion Chuck Liddell’s new show, similar to Dana White’s Looking for a Fight. With several knockouts and all-out brawls, it was a night to remember for guests and fighters alike. New York Fighting’s Pari Aryafar and photographers Hayley Ellen Day and Brian Rubio were on hand to capture all the action.

Rice sprawled several times to get Pititto into side control, as Pittito worked his guillotine. Every time Rice went for a sprawl, Pititto would answer by capturing him in guillotine, making it difficult for Rice to go after a submission. Briefly, Rice was doing a headstand on Pititto’s abdomen using the cage to balance as Pititto refused to let Rice go. In R2, Rice went for a sprawl, tossing Pititto over his back. Despite Pititto’s best efforts and attempt to maintain his grip, Rice worked his way into side control and captured the Kimora submission. 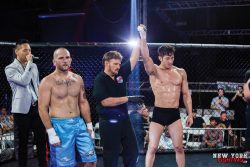 Dellavecchia went for a takedown, lifting Buser up and dropping him. Immediately goes into side-control, putting pressure down on Buser so that he’s not able to lift his torso to fight back. Dellavecchia began attacking the body with strikes as Buser interlaced his arms together to keep Dellavecchia down. Dellavecchia got buser onto his side and began working on taking his back to grab his left arm. Buser attempted to turn over to get outhut Dellavecchia stayed strong and managed the Kimora with only seconds left in the first round. 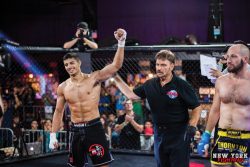 Gotay pressured Torres against the cage maintaining a strong clinch, searching for the opportunity to take down. Torres’s took the opportunity to land a few uppercuts and knees as Gotay continued to press Torres against the cage. Torres grabbed Gotay’s head for control but Gotay managed his way back to keep Torres against the cage and put himself into plum to enter knees. Gotay then took the opportunity to land a few knees but Torres reversed position and went for the takedown just as the bell sounded. In R2 Gotay landed a tough hook and then sprawled into a takedown, keeping control of Torres head. The men lifted themselves and resumed to their original position in clinch. Torres continued to knee as Gotay looked for an opening to take him down. Torres reversed position once more and took Gotay down, finding himself in his guard right as the round ended. Torres took a diff approach in R3, beginning with strikes to the head and body. He kicked and then entered into clinch once more, but Gotay pressed him against the cage. Torres changed into control and landed a few knees, using his head to pressure. Gotay ended the round by falling to his bottom and attempting the guillotine to no avail. 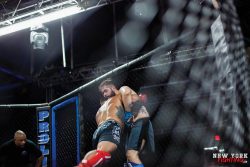 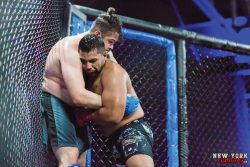 Pottinger started the fight with a body kick as the two entered with their punches, landing one on each other. Barnes went to kick as Pottinger caught it and used the opportunity to take him down. Pottinger mounted and began an aggressive ground and pound, causing the ref to end the bout within the first minute. 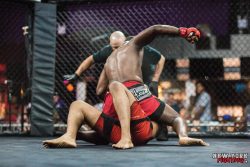 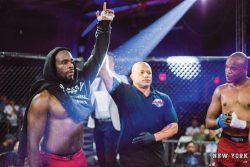 Evans closed the distance immediately with his punches but Chin pulled him to the cage and went for an impressive take down. Chin worked in side control using the cage for support, slowly taking Evans’ back and pressuring him onto his side. Chin looked for a footlock but Evans was able to escape, but was pulled into Chin’s clinch. Chin used the cage as support to control, but Evans used his boxing to keep Chin at bay. Chin sprawled, taking Evans down with him, but Evans searched for the opportunity to take his back. Just as he was getting his hooks in to end a submission, the bell sounded. R2 began with Chin looking for an opening to take take Evans down, but Evans landed a powerful low kick, stopping Chin in his pursuit. Evans managed a takedown and got Chin on his back, keeping a tight side control and looking for a loose arm to submit. Chin framed to keep Evans at distance but Evans went for a seatbelt, raising Chin to standing level and landing knees. As he did so, Chin grabbed his knee but Evans capitalized and took his back, attempting a tight rear-naked choke, using his body weight to apply pressure. Chin tapped just as the bell sounded. 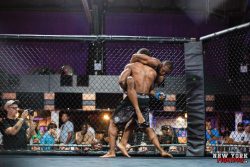 Both men threw kicks at the same time, but Zavala was eager for a takedown, searching for opportunities to do so. He double-legged Cardenese down but Cardenese stayed active and not completely within his grip. Cardenese pulled Zavala onto his back and got the armbar submission within the first moment. 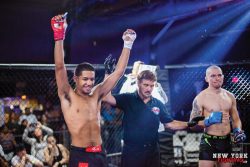 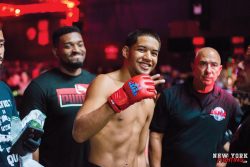 Bianco began the bout with leg kicks as Ajim went for a takedown. He brought Bianco down to the ground and searched for a submission with the arm as Bianco kept his elbows tightly in. Bianco managed to roll out but Ajim took control of his back and maneuvered into mount. Bianco rolled once more onto his back, allowing Ajim to take control and seal the rear-naked choke. 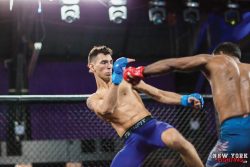 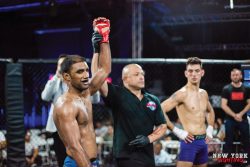 Castro came in aggressively with a barrage of kicks and punches before jumping into a takedown. He mounted Walker and put his entire body pressure onto him as he tried to ground and pound, before Walker got up and reversed position into his own mount. Castro escaped out and quickly used the opportunity to seal an armbar, within the very first minute of R1. 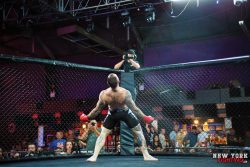 Knight and Giordano exchanged lowkicks to measure distance before Knight went in for a take down. He mounted Giordano and pressed him against the cage to make it more difficult for him to escape. Knight switched from mount to side control and back to mount again before Giordano pulled him into his guard. Knight landed strikes to the body while working in Giordano’s guard. Knight escaped from Giordano’s guard and worked in side control once more as Giordano attempted to frame. Knight attempted to submit with his arm but Giordano pulled out, not before Knight got him into a guillotine and lifted his entire body up before the bell sounded. In R2 Giordano immediately landed a powerful kick that sent Knight stumbling before kicking him once more. Knight worked his wrestling and brought Giordano down to the ground once more, entering mount as Giordano pushed him into his guard. Taking chance of Giordano pressing forward, Knight shot upwards and took his back, landing the rear-naked choke, backflipping seconds after Giordano tapped. 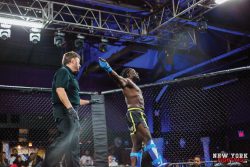 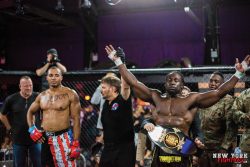 The two gauged each other cautiously, looking for an opening. Larkin threw a few kicks and went for a takedown but Mitchell averted. Larkin threw a kick that Mitchell caught and threw his foot down to the ground, leaving Larkin open for ground work. Mitchell went into Larkin’s guard, lifting himself up as well Larkin who hung tightly to his body. Larkin searched for the armband despite Mitchell working to get out and pressuring his neck and head. Mitchell attempted to strike the body but Larkin held fast to his arm, searching for an armbar or triangle as he worked his legs around Mitchell’s neck. Larkin was bleed profusely in the back of his head, his dyed-blonde hair turned crimson from being slammed at the end of R1. In R2 Larkin again was cautious, keeping distance and searching for an opening. Mitchell kicked the body that Larkin caught immediately and went for another takedown. Mitchell was once again in Larkin’s guard as Larkin attempted to maneuver his legs for another armbar attempt. Mitchell kept moving to evade attempts but it was clear Larkin was slightly fatigued. Mitchell landed powerful blows to Larkin’s head as Larkin closed the distance and kept their bodies close. Mitchell continued punching Larkin’s head and attempted to take Larkin’s back due to a change in his position. In R3 the two threw punches and kicks jammed up, but Mitchell hit and moved, keeping himself at angles. Alternating in a southpaw position, he shot for a takedown, keeping a grip on Larkin as he grabbed him into a guillotine. Larkin escaped momentarily but had a difficult time getting out of Mitchell’s grasp. Larkin began hitting Mitchell’s head profusely while searching for a Kimora. Mitchell kept pressure against the cage as the bell rang. 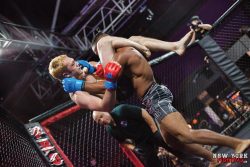 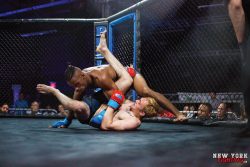 Stock threw a few head kicks that Payne was able to catch but Stock looked for the chance to go for a takedown. Payne was able to get out and throw a few strikes, but Stock dodged and went for a takedown. Stock grabbed Payne’s head with one knee still down into the ground but Stock wasn’t able to secure a submission. Payne held fast to Stock’s arms, refusing to give way to the armbar. Stock had both legs wrapped around Payne’s head but Payne was able to pop his head out and fight within Stock’s guard. He began striking his head and ribs from Stock’s guard. In R2 Payne attacked immediately with kicks and lifted Stock and dropped him in a hard takedown. Payne entered side control and worked his way into Stock’s guard. Stock attempted to triangle but managed to pull Payne into an armbar. 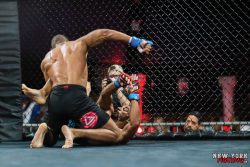 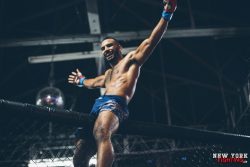