Not Just A Girl in A Gi, Faye Farrales Wants to be The Best 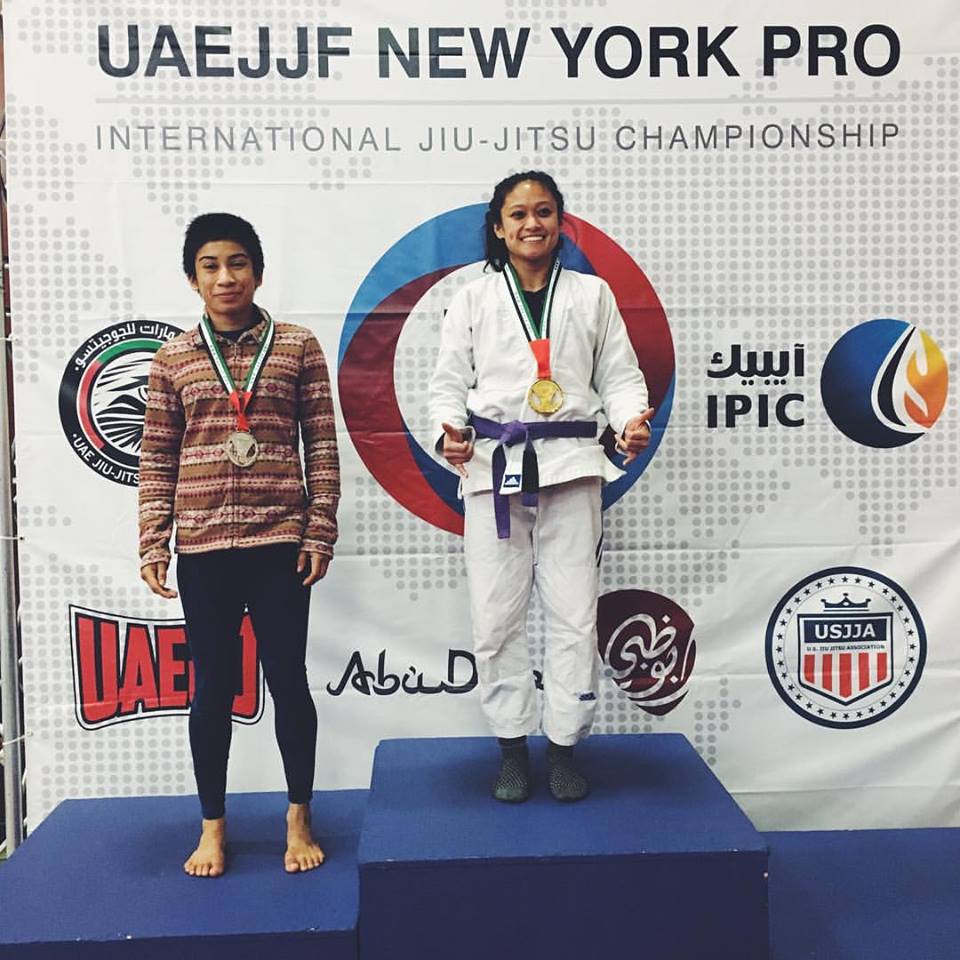 Small, wiry, and flexible on the mats. Loosen your grip even slightly, and she’s out of your grasp. Her teammate’s fingers are sore from trying to hang onto her gi, but Faye fights to gain control. A few seconds ago, she was fighting from the bottom, but she’s found her way into side control. Despite a weight difference of likely fifty pounds and the fact that she’s sparring a man old enough to be her father, or at least an uncle–her face is taut and focused. He’s resisting and trying to shrimp out, but somehow this much smaller woman is keeping him in her control. Her arm maneuvers cleverly and she manages the Americano lock. Her partner grimaces and taps to the submission. Faye immediately lets go and disengages. The man sits up, stretches his arm out, and brings her back into his guard. They begin again.

Her teammates call her “Iron Faye” Farrales, which conjures up an image of a steely, stone-hearted, cold individual. Watching her on the mats, it seems suitable, but as she climbs the stairs to the locker room, she’s anything but. She has dimples in her cheeks when she smiles, which is quite often, and a laugh that could be heard from the other side of the room. She cheerfully acknowledges her teammates and coaches as she walks by, even after drilling for more than 2 hours and being drenched in other people’s sweat. So, where does “Iron” come from?

Almost serendipitously, because of a chemistry pun. Just like a scientist, Faye is technical, focused, and determined. Her nickname comes from “Fe” for Iron, and the shirts and hashtags grew from there. The little details are what’s most important to her, so much so that herself as a person isn’t what matters. It’s everyone else that is significant to her.

“I have a lot of people that I look up to, but many of them are my teammates,” Farrales says. A purple belt in JiuJitsu at Renzo Gracie Academy, she has been training there for the last five years. Her journey in martial arts originally began at a boxing gym, where she worked. She was invited to a Renzo Gracie seminar by his students that frequented her gym, and the rest was history. Renzo himself watched her during the seminar and called her a natural. She immediately signed up, but began training Muay Thai first. However, her attraction to BJJ won her over and she decided to focus on that instead. 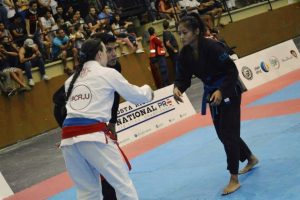 As Faye talks, she often brings the conversation back to her mentors or teammates. It’s not that she’s uncomfortable with speaking about herself, but makes it clear that she doesn’t think she would be where she is today without them.

“It’s not a journey you can really be successful in if you’re trying to do it alone. The community is why I have stuck around, because I’ve met so many amazing people that I have enjoyed learning this martial art with. I met my BJJ sister, Ellie Bautista, through it and it was because we connected at first about all the things we had in common. People always confuse us for the other, and funnily enough, that just made us grow closer. Maeghan Reid, Dana Minuta, Katlyn Chookigan, Ida Fløisvik–they’re all women that I met through training and we’ve created a real solid friendship off the mats. We’ve all grown and developed with each other, and have been there to celebrate each other’s successes.”

Brazilian JiuJitsu has been a huge part of Farrales’ journey in New York. She started training almost immediately after moving to the Big Apple from Seattle, and it has shaped much of her perspective. 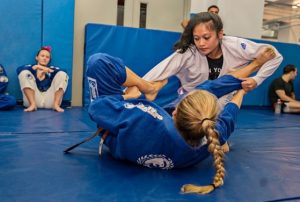 “I’ve learned a lot about myself and what it is that I actually want from my life. It’s helped me to stay true to myself, not to try to please everyone else or be someone who I’m not. JiuJitsu has allowed me to feel free and feel okay with, ‘Hey this is who I am’. And I like who I am.”

The busy athlete maintains a packed schedule with work and training clients, but squeezing in the sport is the most enjoyable challenge of her day.

“Actually,” she says with her characteristic laugh, “I’m constantly fighting with myself on just what classes to take. I want to be there all day and do everything, but that’s not realistic for my lifestyle. I have to be particular sometimes and that’s the hardest part. Spending hours on the mat isn’t a problem for me. It’s getting off the mat that’s difficult!”

Farrales manages her time by creating a schedule that allows her to work on different things every session. Some practices are just to roll and be loose, while others are particular drills with specific individuals. While competing is her passion, the ultimate and concrete goal is to obtain her black belt.

“I’m passionate about this, and want to share it with as many people as I can. JiuJitsu is for everyone. I always want to give this gift to others, just as it was given to me. My focus is to teach as much as I can and serve the community. Eventually, I’d like to teach BJJ full-time to kids, because children should have something like this in their lives. All the confidence I’ve gained and the skills I’ve learned–imagine being a kid and having that! You’d be unstoppable!”

The health and fitness advocate ultimately would like to create a program that can provide JiuJitsu in communities that are underprivileged. A firm believer in nutrition and well-being as a priority for all people, she is certain that by teaching that to kids when they are young, they will grow up understanding the value of what they eat and do.

“As a Filipina, I grew up around greasy fast food. My parents ate whatever was put in front of them, so that was also the case for me. I learned how to eat properly, especially as an athlete, but for lots of people, they never get that opportunity, and it negatively affects their lives. If I can help others in that way, it would benefit and really just save so many people.” 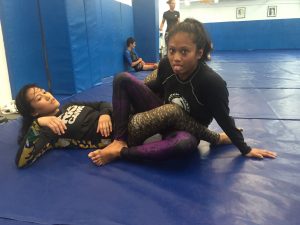 While Faye puts together her master plans, she looks to one very important person for advice: Mushin MMA owner and founder Erik Owings. The former MMA fighter and trainer to Georges St-Pierre is also Farrales’ boss and mentor.

“He puts things in perspective for me. He’s straight-forward and helps me focus on what’s important. We put so much effort into our emotions sometimes that we miss what’s actually going on and he’s helped me to realize that. Detaching your feelings from the results, just paying attention to your breathing–all small things that make a huge difference. He’s a very different kind of coach, is super knowledgable, and I can ask him questions about anything. I respect him so much as a boss, a black belt, and a professional.”

Farrales credits Owings to helping her develop her JiuJitsu game, as well as her training partners at RGA.

“I look up to my teammates so much. Whenever I’m feeling down, I look to them for advice and they just pick me back up. The women especially have a really strong bond and we are all very close. We’re a family.” 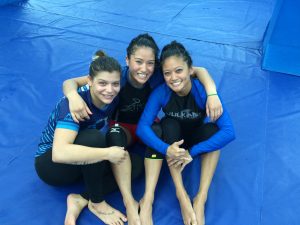 Her academy family has seen the transition in Faye as she has become more confident both on and off the mats. A regular competitor, she has competed all over the world and engaged in 2 superfights. Most recently, she won her last superfight as well as gold at the UAEJJF New York Pro in her weight class. JiuJitsu isn’t the only thing that keeps her occupied. She also completed the United Airlines half-marathon and is the project manager of A Love Squad, a fitness and sports lifestyle brand. Farrales’ is also relaunching her website, The Good Chief Co., which provided advice and insight from her own life. On top of everything she’s accomplished, she has also become an Adidas Combat Sport Athlete. Sponsored by the Three-Stripe Army, Farrales joins the likes of Heather Hardy and Hannah Bronfman as ambassadors. 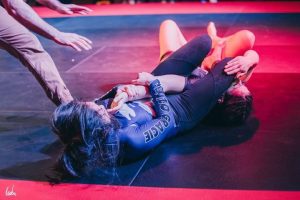 What has the journey been like for her as she has seen her life completely transformed by the “Gentle Art”?

“You reveal who you are to yourself when you fight. Will you fight or will your body push you to run away? In a superfight, all eyes are on you and it’s deadly quiet. The lights are shining in your eyes and the adrenaline is pumping through you. Who do you decide to be in that moment? I decide to be a champion–so to be that person, I have to do and think what a champion would do. That’s how I’ve decided to live my life.”