Lou Neglia and Matt Culley’s RISE Invitational 7 returns to The Space in Westbury NY on Friday, June 21st, live on UFC Fight Pass with a card stacked top to bottom with UFC veterans testing their mettle in submission-only grappling, and stars of the BJJ and Grappling scene showcasing their skills.

In the Main Event, UFC veterans Josh “The People’s Warrior” Burkman and Serra BJJ black belt Pete “Drago” Sell will do battle, in a rematch of their 2008 fight in the UFC which Burkman won by decision.  Drago has the advantage of having competed in RISE before and will be seeking a measure of payback.  He is also better known for his Jiu Jitsu game, but Burkman does boast 10 wins in MMA by submission and owns a submission victory over legendary MMA grappler Jon Fitch.  The match will be 10 minutes, submission or draw, with no judges decisions, so the fighters are sure to push for the finish.

In another submission-only battle of UFC veterans, current UFC Light Heavyweight Gian Villante will tangle with Chris Camozzi. Villante, who has a scheduled bout in the UFC against Mike Rodriguez on July 13th, may be using this match as preparation for his fight, while Camozzi, who trains regularly at LAW MMA, has a BJJ brown belt under Mario “Busy” Correa.  These fighters know each other well and are very competitive so it will be interesting to see the strategy each brings to the match.

In a main card Superfight, RISE veteran Adam Collarile returns to the stage to take on recently-retired UFC mainstay Dennis “The Menace” Bermudez in a submission-only match.  Known for his Division 1 wrestling experience and tremendous conditioning, Bermudez brings an aggressive pace and tremendous pressure, as well as strong submission defense that will surely test Collarile’s limits.  Collarile, for his part, is 2-0 in pro MMA competition and was a New York State wrestling champion himself, but is better known for his submission skills having trained in BJJ since 2008, including 6 years under the tutelage of BJ Penn, and competing on the RISE stage before.

In championship action, RISE Featherweight Champion Frank Rosenthal returns to defend his title against an exciting and dangerous challenger in Gracie Barra black belt Carlos Rosado.  Rosado, who has competed at RISE in the past among other promotions, and has won multiple IBJJF championships, has an aggressive submission-oriented game and figures to push Rosenthal as few have been able to do.  Rosenthal is a member of the famed “Danaher Death Squad” out of the Renzo Gracie Academy in New York, and has shown his prowess in leg locks at RISE by snatching the fastest submission in RISE history when he heel hooked Jimmy Santiago at RISE 5.  The match will consist of a 10 minute sub-only round with a single round of EBI-rules overtime if necessary, so both men will have plenty of opportunities to unleash their submission arsenals.

Not to be overlooked is a main card bout featuring multiple time BJJ world champion Joao Miyao out of Unity BJJ, taking on 10th Planet black belt Zach Maslany out of 10th Planet Bethlehem.  If you know Jiu Jitsu then you know the name “Miyao” as Joao and his brother Paulo are two of the most decorated BJJ competitors in the world today, with too many accolades to list.  They most recently closed out their division at the 2019 IBJJF World Championships, and in this 6 minute sub-only match, Joao will bring his increasingly well-rounded submission game and notoriously difficult submission defense to shine on the RISE stage.  His opponent is RISE veteran Zach Maslany, who is a veteran of the sub-only circuit and figures to bring his A-game as he takes on arguably the toughest challenge of his career.

The main card kicks off with a 4-woman tournament to crown the inaugural RISE Strawweight champion, in a field that features Liz Cornejo of Vamos MMA, Katya Leontyeva of Renzo Gracie NYC, Cheryl Rock of Serra BJJ, and Cece Mena of 10th Planet NYC.  And in a sign of things to come, the card features a #1 contender match for the Featherweight title, with RISE veteran Rey De Leon taking on fellow RISE veteran Sergio DaSilva.  These black belts will be gunning for a shot at the winner of the Featherweight championship bout between Rosenthal and Rosado.  In other main card action, BJJ standouts Alex Hooben and Joe Mugnai will face off in sub-only action, along with Alex Bertrand taking on BJJ standout Alex Ecklin.

The main card kicks off live on UFC Fight Pass at 10 PM for those who cannot attend live at The Space in Westbury, NY, and the live event features a full undercard highlighting the next generation of grappling and MMA superstars from the Tri-State Area.  Don’t miss RISE 7 on Friday, June 21st! 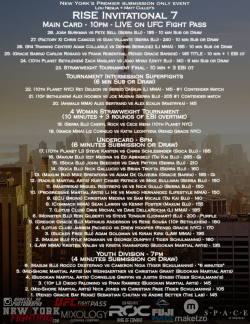