The Unbreakable Heart of Jennie Nedell 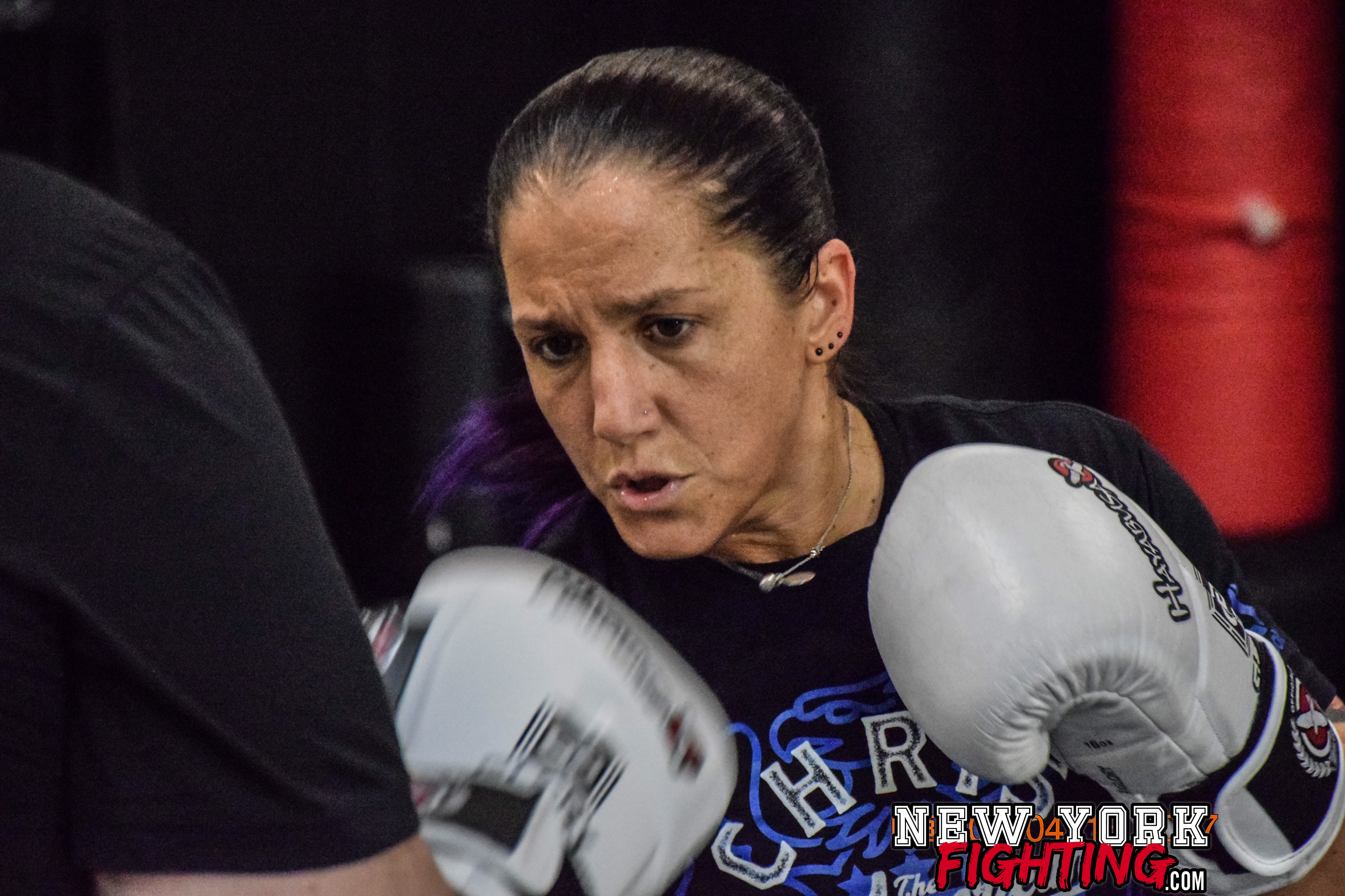 “The world would be a better place if there were more people like Jennie Nedell in it,” says Dave Patton, brown belt in JiuJitsu and instructor at Longo and Weidman. He’s stretched out on a couch while his students and friends begin to trickle in to watch the fights of the night. When they hear an article is being written about Nedell they chime in–

“She’s one of the hardest workers we know.”

“She gives everything to the students and to the school.”

Brian Freeman, a blue belt and frequent guest at the Serra-Longo and LAW academies pats his daughter on the shoulder and says, “Jennie is just an amazing woman. She is a real role model for girls like my daughter and shows that anything can be possible if you really want it.” His daughter beams and nods her head. 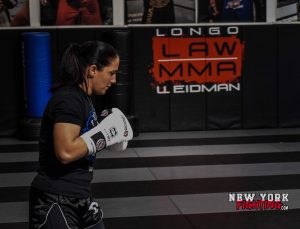 It’s Saturday, a day that many people get together to eat, drink, and be merry. While Nedell herself is not present at this event, her presence is felt. Unlike the people at the party that are surrounded by chips and beers, she spent her day eating well, drinking water, and merrily training for her upcoming bout at Lou Neglia’s Battle of the Millennium 4 on May 12th. Recently signed to Battlescar Management, Nedell has many people helping her to prepare for an exciting summer. However, when she wasn’t training herself, she was holding pads for the women or giving advice to fighters. Seeing Jennie at the gym is like watching a self-contained tornado–one minute she’s at the front desk chatting, the next she’s in the cage with shin guards on and sparring, and if you even blink, she has moved to a corner of the gym where she is holding pads and reminding students to keep their hands up. It’s obvious that she feels at home at LAW. 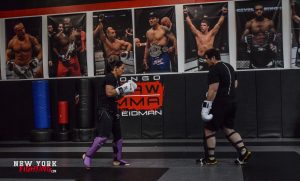 “It’s a very close connection here,” Jennie says. “You see these people day in and day out, and you see who is here for the right reasons. They’re here to bleed together, sweat together, and cry together. Even guys like Weidman or Iaquinta will work with the new people and try to make it fun for everyone. It’s about being humble and helping each other. There’s no ego here, and we get that from Ray Longo. They’re my family.”

Nedell is close to many of her teammates and the entire team is eager to watch her fight in May. Her opponent, Soledad Zapate, is hailing from Chile and boasts a record of 15-1. She has about the same amount of professional bouts as Jennie, who is 8-2, so both women are evenly matched. Despite another fight soon after at Madison Square Garden for Glory Kickboxing, Jennie says she is putting a lot of emphasis on this fight.

“I only want badass people to fight, and from what I’ve heard about her, she’s an amazing fighter. My mentality going into this bout is that I need this fight to get me even more focused. This is what I love, this is what I do, and this will add to my intensity and will help me for my next camp. I’m super excited for July, because it’s a dream come true to fight at Madison Square Garden for Glory. But before I even get there, I have to focus on this. I can’t look past this woman and am taking her very serious. She is coming after my belt and I have to defend it.” 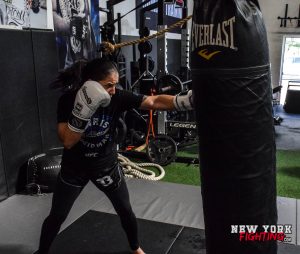 Training back-to-back fight camps doesn’t give Nedell much time off for herself.

“I get about a day off in between camps, so I’ll be sure to enjoy my friends, my family, and a lot of carbs. I miss a lot of birthdays, a lot of holidays, and occasions. Everyone is used to it, but that doesn’t mean I can get it back. I try to make up for it, but I’m still just one person. Just sacrificing my life to be a fighter is the hardest part of all of it.”

Close friend and fellow fighter Heather Hardy understands this, and the two women always go to each other’s fights to support one another. At Jennie’s last bout at Combat at the Capitale, Hardy’s voice was louder than anyone else’s in the audience. Heather says, “Jennie is one of the hardest working athletes in the sport. I have no doubt that she’ll walk home with another big win, and another big weekend of pizza with me.”

Despite all the things that must be sacrificed in order to live the life of a fighter, including delicious food and sleeping in, Jennie focuses on one thing to keep her going.

“I promised my dad before he passed that I would make it to the Olympics for softball. Then he passed and I found myself being a dirtbag and not doing the right things. I made it to a collegiate level but never the Olympics. He was there when I first started kickboxing and really believed in me. I’m doing it for all the people who support me, for my dad, and for the people who doubt me to show them that I can do this. Thinking of that is what pushes me to get out the door at 5 am right before work to do sprints, and is the reason why I have been able to get myself this far. You have to have something to hold onto before you fight, otherwise that other person has beaten you before you’ve even started.” 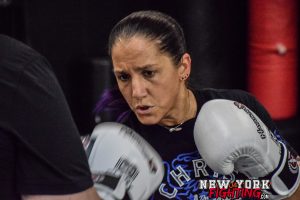 Jennie’s father set the standard of the kind of person she wanted to be. He passed in the 9/11 attacks on the World Trade Center and since then, Nedell has carried his legacy in the way that she conducts herself.

“The person who my dad was, even just growing up outside of fighting, was someone who was amazing to me. The man would be out from 4:45 am to 7pm working. We didn’t have a lot growing up but what we had, we appreciated it. My dad sacrificed so I could have the best softball glove or my sister could have a car. That helped me be the person I am today, to understand what it means to work hard. Rather than just being given everything I wanted, I learned to appreciate working hard for what I had. When I came to train, Ray said that they would help me get a few fights but that wasn’t what I wanted–I wanted to fight and be better and just do better instead of fighting to say that I fight. I knew what I had inside of me and I wanted to bring it out.” 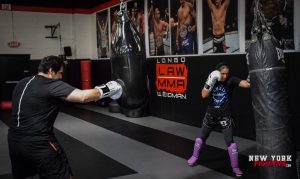 As a coach, Jennie uses her experiences as a way to help her fighters get through their own battles.

“I take all my feelings that I feel in camp as a fighter onto my students. I know what they’re going through and I get it. Like, ‘Is this worth it? Why am I doing this?’ But when you see that fire in someone else, you feed off of them. As a coach and a corner, you almost need to put a mute button on me because I can go psychotic. I can’t even hold back. You have that bond, that intensity, that only another fighter can understand.”

As she knows, being a fighter isn’t easy, and sometimes it’s difficult for students to figure out what it is that their coaches are looking for.

Nedell simply says, “Heart. What I look for in fighters is the desire. I know it’s hard. I work a full-time job, I teach here, I train other people, and I find time to train myself. But if you want it, I’m here for you. If you have that drive and desire, I’ll be there. I’ll be there at 7 am on Sunday morning running with you or training at 10 pm at night holding pads. If you want it, I’ll be there for you no matter what. As long as you’re on that level and we share that passion and drive. That, you can’t teach. I can teach you how to throw a punch or kick, but I can’t teach you to throw that last punch when you’re exhausted and want to give up. I can’t teach you to get up in the morning when you’d rather be sleeping or going out. That’s heart, and that’s something you have to have already in yourself. You either have it or you don’t. If you got it, I’ll always be there for you.

That’s something that I always had with my dad. My dad would always tell me that no matter what it was, ‘You can do it, I don’t want to hear excuses.’ And I’m like that with my students, if they say they can’t, I make my students do 50-100 burpees. I’m 38 years old, my sparring partners are half my age, but I’m here. If I can be here, so could you. If it’s in you, people will feed off it and will support you. It’s a domino effect of greatness.” 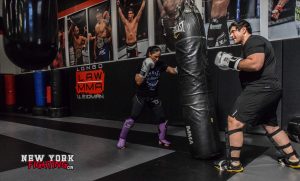 With everything that Jennie has happening for her in the next few months, it would be easy for anyone else to become overwhelmed. Not so for her, she’s more excited than anything else.
“Fighting at MSG is a dream. I’m stepping into where Muhammad Ali fought. This is really the pinnacle of my career. It shows that if you work your ass off, you can get whatever it is that you dream of. You just have to want it and be willing to put the work in for it.”