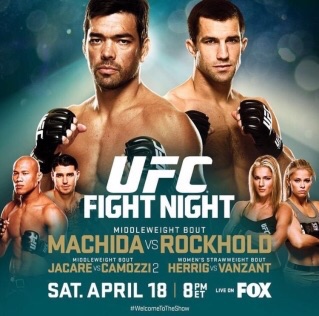 This Saturday, April 18th, the UFC returns to the Prudential Center in Newark, New Jersey for UFC on Fox 15. The event will air live and free on the Fox network, and features a Middleweight main event with title implications, as American Kickboxing Academy standout Luke Rockhold (13-2) takes on the enigmatic karateka Lyoto “The Dragon” Machida (22-5). Machida failed in his July 2014 attempt to unseat reigning champion and New York native Chris Weidman, and hopes to use his movement and commandof distance to earn a victory and possibly another title shot. The well-rounded Rockhold is currently riding a three fight winning streak – all stoppages – and hopes to earn a title shot of his own with a win in Newark. Weidman takes on challenger Vitor Belfort on May 23rd in Las Vegas.

With much of the spotlight shining on the main event, it is worth noting that the event also boasts a slate of fighters based out of the tri-state area, with three fighters hailing from New York: Eddie “Truck” Gordon, Aljamain “Funk Master” Sterling, and Gian Villante. Expect friends, family, and local fans to be on hand in large numbers to support these athletes, since Newark is as close as the UFC will get to New York State with New York’s MMA ban still in effect. In keeping with our name, NewYorkFighting.com is taking the time to break down the matchups featuring fighters from the Empire State. 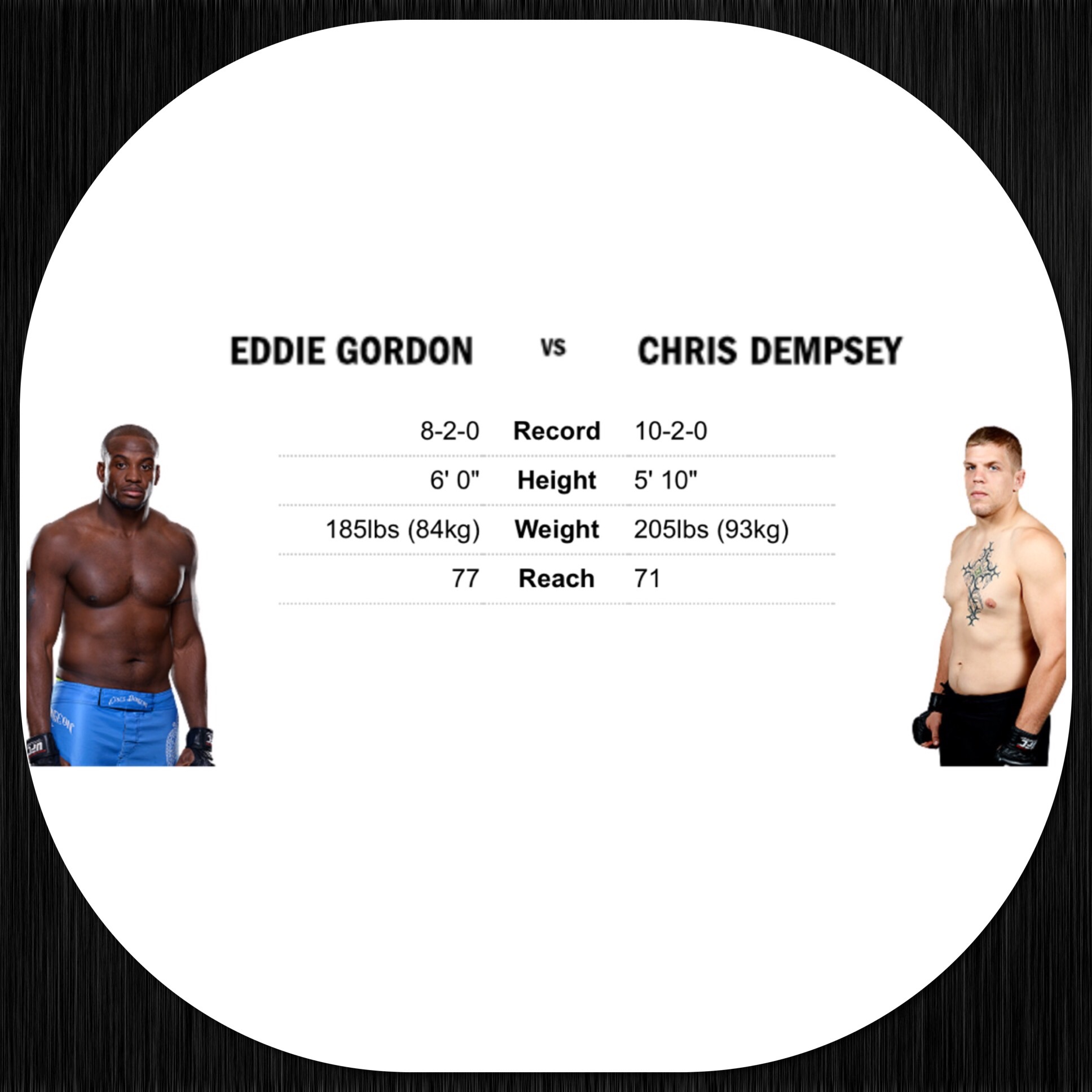 The winner of The Ultimate Fighter Season 19, Eddie “Truck” Gordon returns after suffering his first setback in the Octagon, a devastating head kick knockout at the hands of Josh Samman. Representing the highly respected Serra-Longo Fight Team, Truck burst on to the UFC scene with a brutal knockout of the highly-touted Diego Lima in the live TUF 19 finale. His second UFC fight, versus Samman, saw Truck dictate the pace and control the first round, before falling victim to the head kick in round two. Gordon is a powerful fighter who looks to implement aggressive takedowns and heavy punches on the ground or on the feet. His power was evident in the Lima fight, where Lima seemed to block Gordon’s punches on the feet but was still wobbled by the strikes. Conditioning appeared to be an issue in the Samman fight, but fans should expect Gordon to focus on coming in to this fight in top shape to put on a show for the home crowd.
Standing across from Gordon will be former Division II All–American wrestler Chris Dempsey, who is looking for his first win inside the UFC after losing his promotional debut by submission to Swedish wrestler Ilir Latifi. A lifelong wrestler, Dempsey is not a natural striker, but is a tough and durable pressure fighter who is fairly well-rounded. Despite his wrestling background, he does not always look for takedowns in his fights, as was evident in his fight with Latifi.

Dempsey’s UFC debut was in the Light Heavyweight division and came on short notice, so it is difficult to measure his abilities by that fight, but he appeared vulnerable on the feet, especially to leg kicks, before suffering a TKO loss from punches. 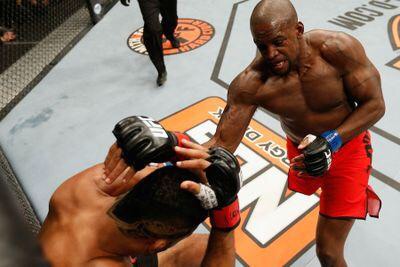 Much like Latifi, Gordon packs a tremendous amount of power in his hands, and should be able to use his wrestling ability to stay upright long enough to land the punches he needs to win. Expect Gordon to claim a KO victory in the first or second round. 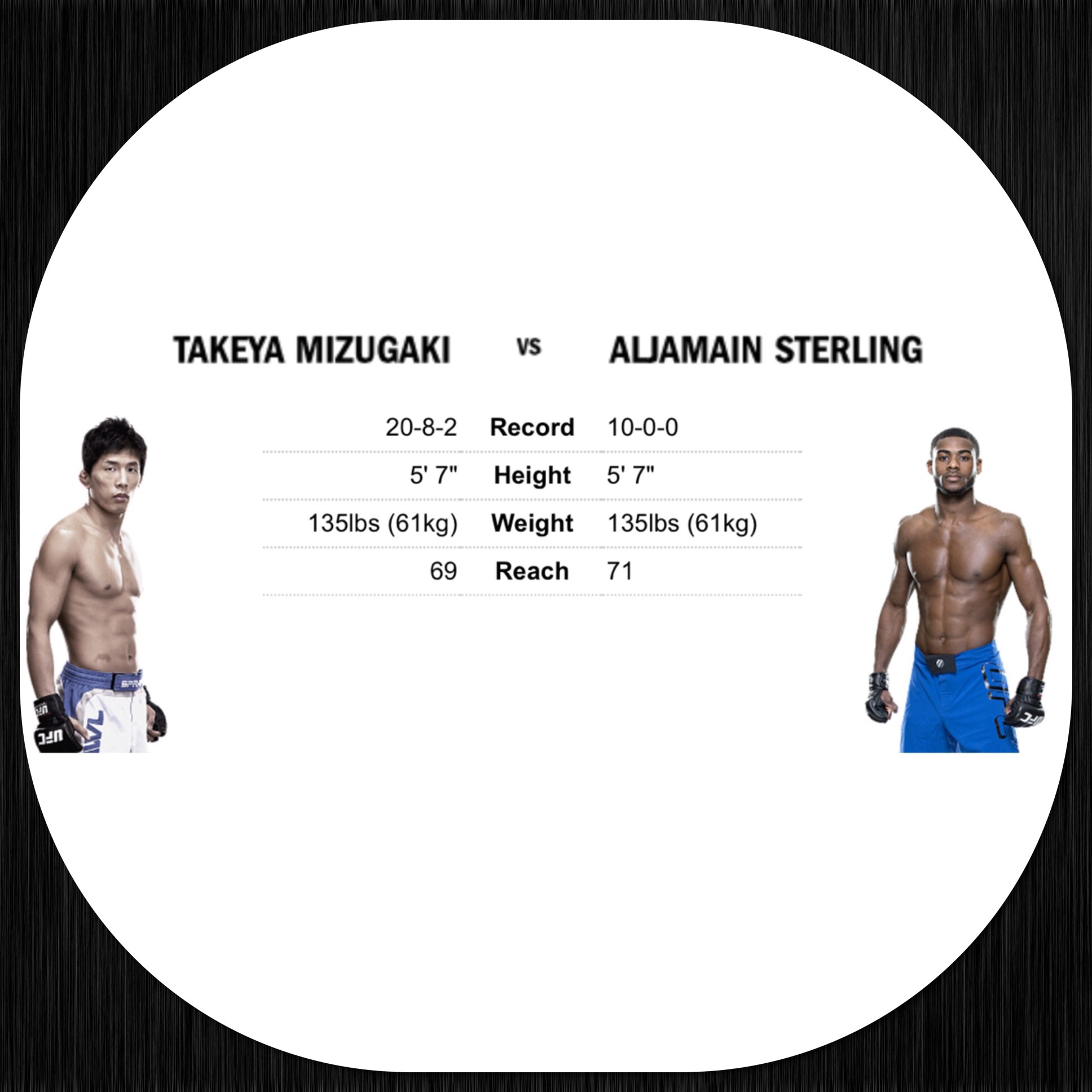 Rising Bantamweight prospect Aljamain “Funk Master” Sterling takes on by far the toughest test of his young career in rugged Japanese veteran Takeya Mizugaki. The Funk Master brings an undefeated record into this bout and is a superior athlete with excellent wrestling and scrambling ability. Another Serra–Longo representative, Sterling has shown the ability to implement a creative kicking and submission game, particularly favoring the rear naked choke, and UFC commentator Joe Rogan once compared him to a  “Bantamweight version of Jon Jones”. 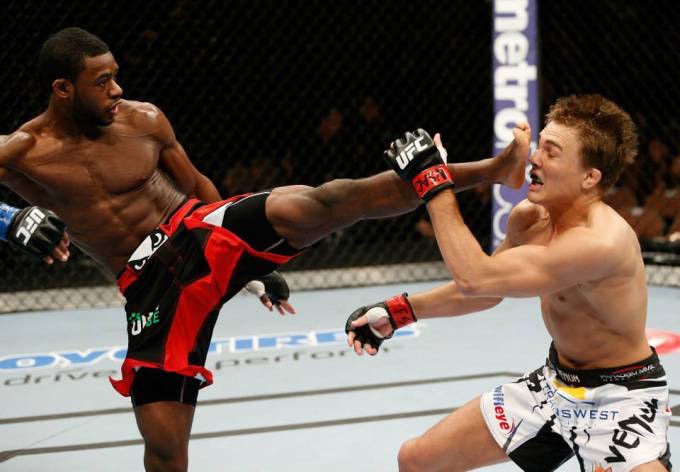 Although he has a way to go before reaching the stature of Jones, Sterling has been nothing but impressive in the UFC thus far. However, he is now taking a tremendous leap in competition.
World-ranked Takeya Mizugaki had built up an impressive five fight UFC winning streak before being decimated by returning former champion Dominick Cruz in his last outing. Mizugaki brings an aggressive grinding style mixed with strong wrestling and clinch work. The longtime WEC and UFC veteran is not known for knockout power or slick submissions, but excels at pulling opponents into his game and making them fight his style of fight. Mizugaki has proven hittable, but is willing to take a shot in order to establish a superior position or land a shot of his own. Cardio remains an issue for the Japanese import, as he has faded late in recent fights.
Mizugaki has the edge in experience, particularly against high level competition, but this matchup has the makings of a coming out party for Sterling. Mizugaki may land a couple of takedowns and strikes in the clinch, but he will probably not be able to do this consistently for the whole fight. Expect the “Funk Master” to utilize his superior speed, athleticism, aggression, and scrambling ability to eventually take control in this fight, winning a clear cut decision or possibly a choke submission over the skilled veteran Mizugaki. 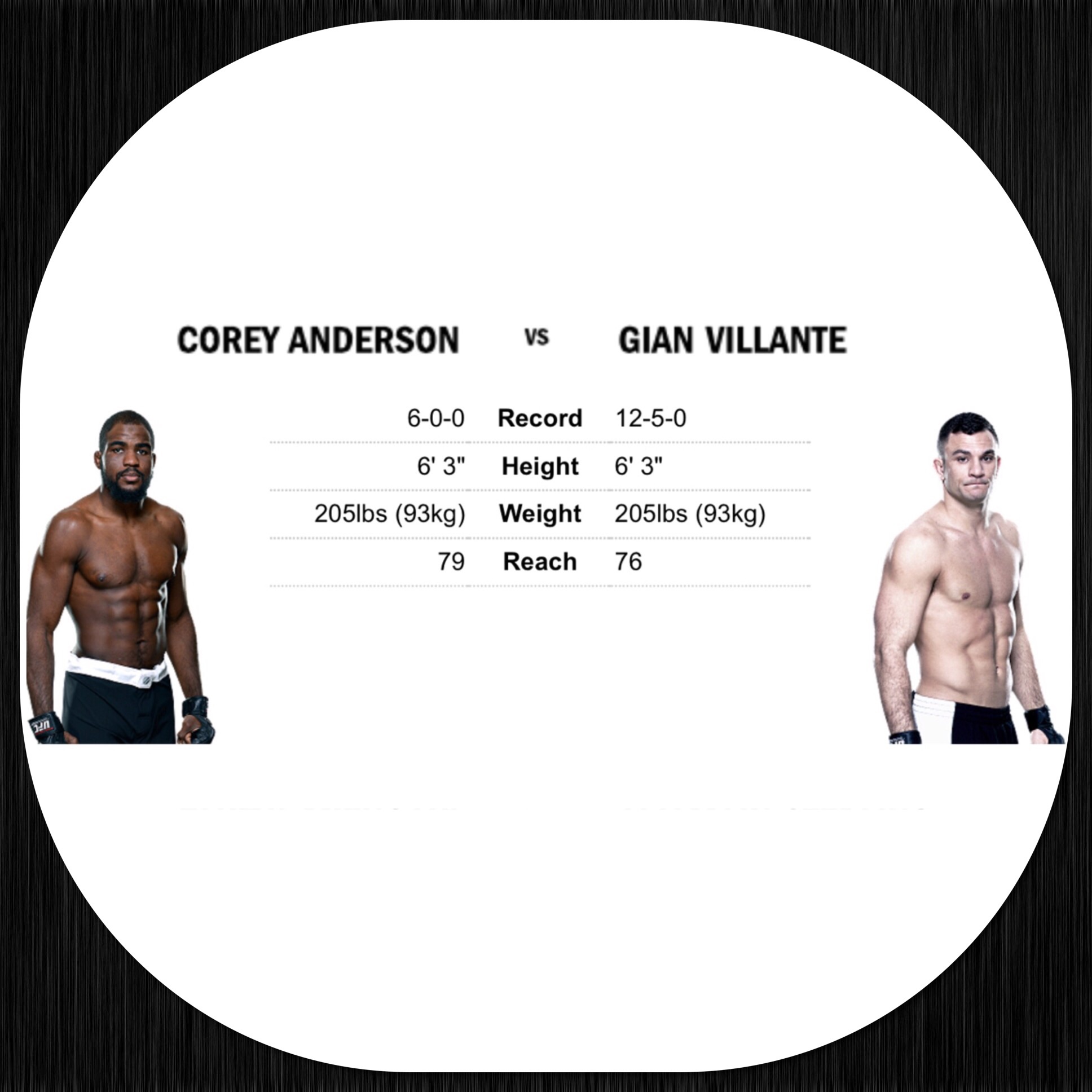 Former Ring of Combat champion and Long Island native Gian Villante returns to the Octagon to take on TUF 19 Light Heavyweight winner Corey Anderson, in a matchup that was originally suposed to take place in December 2014 before Villante pulled out with an injury. Villante sports a 2-2 record in the UFC and is coming off of a narrow split decision victory over Sean O’Connell. While possessing a solid wrestling background, Villante has shown a preference for trading strikes on the feet, which has sometimes paid dividends and other times has gotten him into trouble. A friend and training partner of Middleweight Champ Chris Weidman, Villante obviously does not lack quality training partners.

Anderson impressed viewers on TUF with his superb wrestling and quick aptitude for striking. Since leaving the show he has been working with Ricardo Almeida’s team in New Jersey to round out his game. He showcased his improving hands in the TUF finale by destroying Matt Van Buren in just 61 seconds. The man they call “Beastin 25/8” followed up with a dominant decision win over UFC newcomer Justin Jones, who filled in as a last-minute replacement when Villante pulled out of their original matchup.
This should be a back and forth affair with both fighters landing their share of strikes. 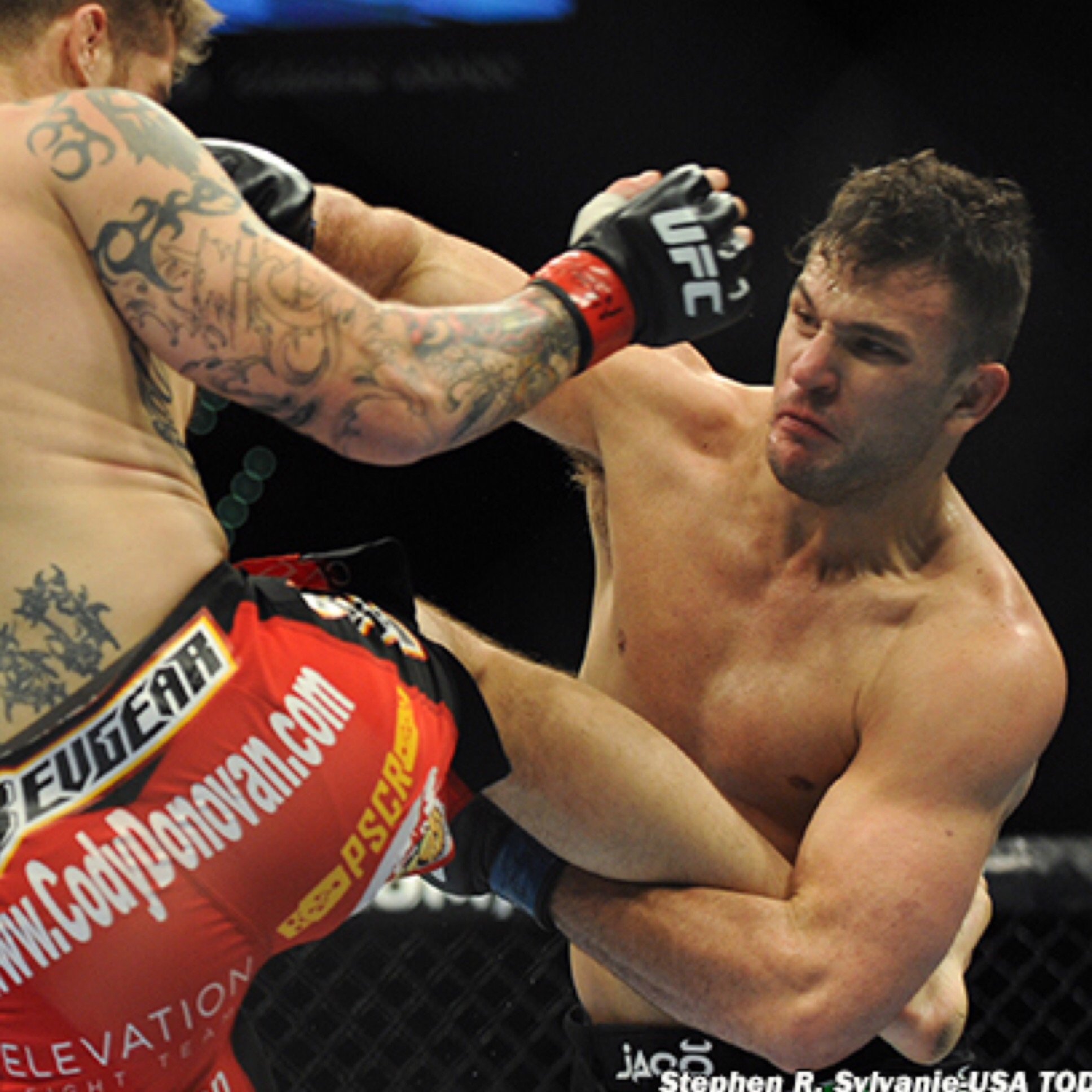 However, Villante should have the more crisp combinations due to his greater experience in MMA and can more than hold his own in the wrestling department. In one of the closer matches on the card, expect Villante to win the striking battle and keep the fight standing up long enough to nab a close decision victory. 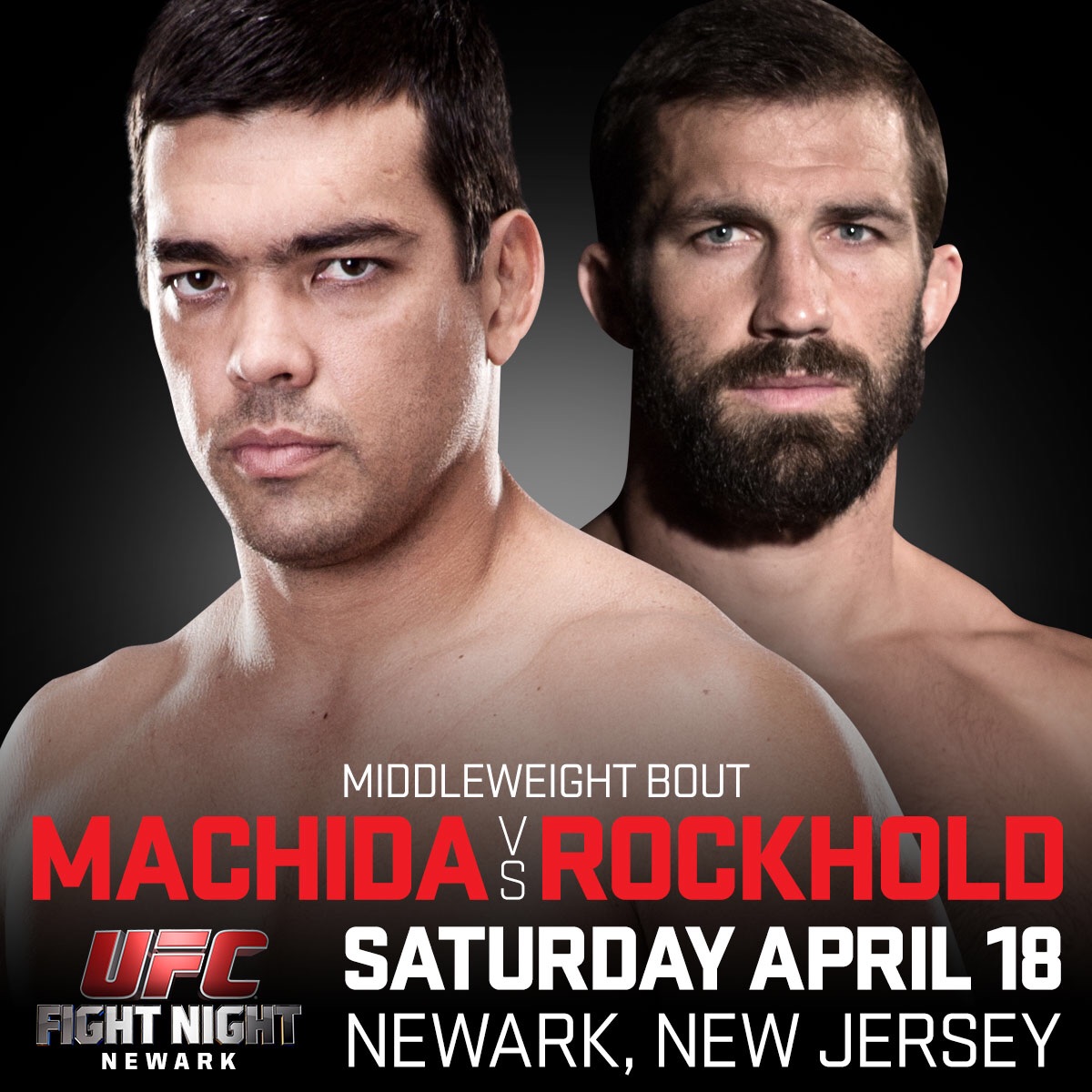