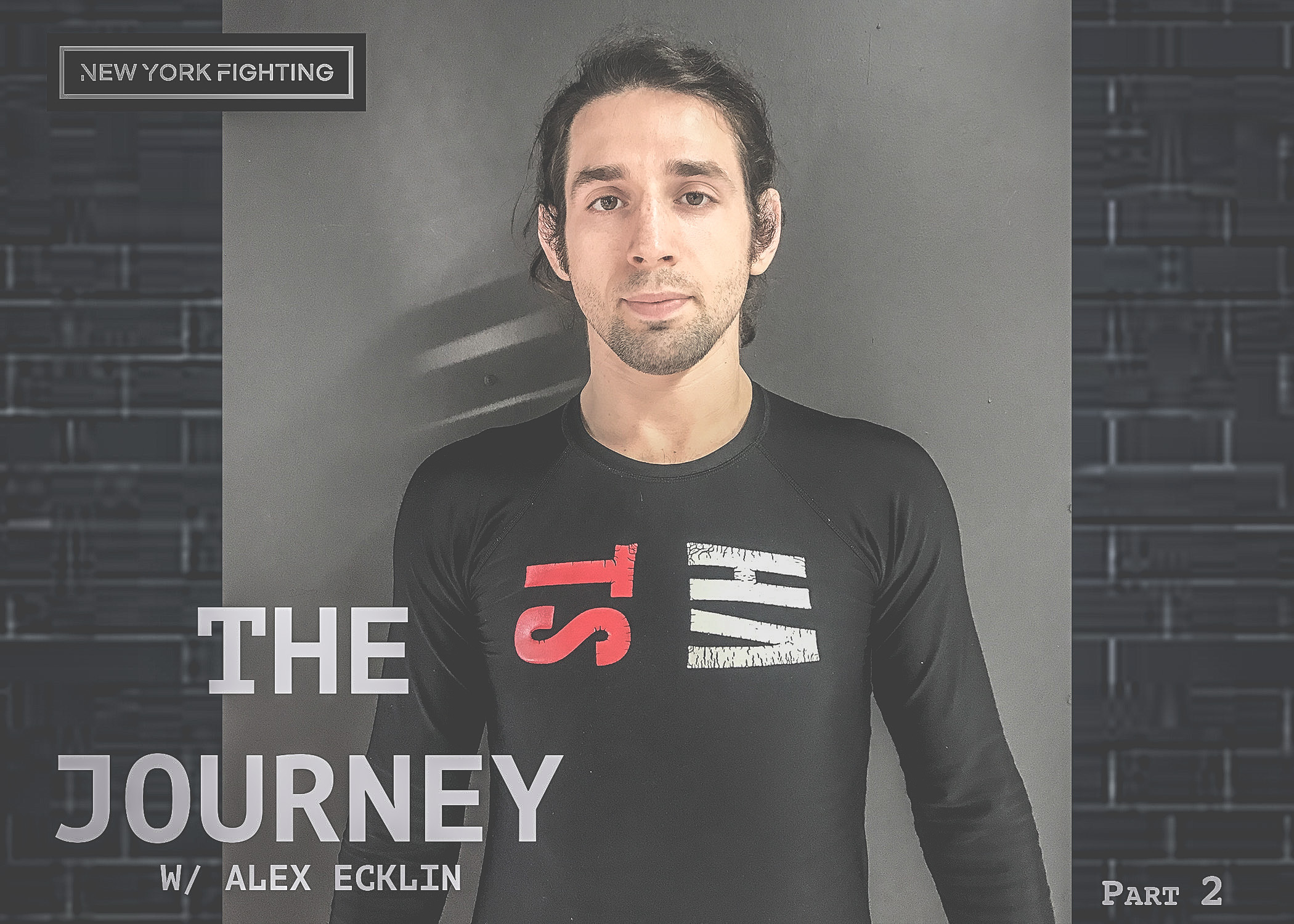 This is Part 2 of our interview with Alex Ecklin (read Part 1 here):

In interviewing Ecklin, I realized that he is more than just the technique that gave him some fame; he is more than a competitor; he is more than a business owner. During our conversation, Ecklin shared one of the great things that was the result of competing in the RISE tournaments. He explained that he was able to befriend one of his former rival and competitor, Nick Pace (UFC Veteran). Through their friendship, they were able to train together, and Ecklin was even able to travel out to California in order to coach Pace during a Combat BJJ tournament. Ecklin remarked that without RISE or without competing, such a friendship, growth, and mutual respect would never have occurred. Personally, I find that to be the mindset of a martial artist. The ability to find value and growth through approach, hardship, perseverance, and the struggles of a journey. Given that mindset, I’m not surprised that Ecklin has kept himself prepared and constantly improving through other means. In addition, although there are presently some hardships with the current pandemic, I’m sure Ecklin and crew will find a way to overcome as a true martial artist always do.  We discussed these things and more in this part of the interview.

Tell us about the gym that you opened. How has the pandemic(COVID-19) affected your gym/business?

Myself and my partner, Evor Guevarra (black belt under Vitor “Shaolin” Ribeiro), opened the gym in 2016.  The gym, called Masterskya, is located in Brooklyn, New York. Right before the pandemic, we were really gaining a lot of momentum and doing well.  Van Allen Flores (former RISE competitor, and black belt under Vitor “Shaolin” Ribeiro),) came on board 6 to 8 months later as my partner and head coach alongside me. We assembled a team of about 10 people. We have a lot of instructors and a lot of students. The students were competing internationally. A lot of our students were doing well on the local scene and even traveling. We went just went to Europe and some of our students medaled in the European championships. I’m really proud of that. COVID-19 kind of stopped that momentum. However, I’ve kept in touch with the students. Hopefully, everybody is staying healthy and in shape. Several of our students were actually sick with the virus. However, everyone has recovered. Thankfully! Financially speaking, I’m not even sure what is going to happen when we reopen. The reason being that I’m not sure how much longer it’s going to be. I’m not sure how long we have to stay away from the mat and operation.  I’m not even really thinking about that. I think we are in the same boat as pretty much every other school. I’m waiting patiently until the pressure, sort of speak, is released and work to get our guard back and our sweep back (metaphorically speaking). Basically, keep fighting.

In terms of you competing, are you doing anything in particular in order to stay prepared when things reopen? How are you planning to hit the ground running?

Absolutely. First of all, when I was running the gym even though we had two locations, I would be teaching and training 7 days a week. I haven’t had any days off for the past 4 years. The only days off that I took were for traveling to compete, to corner people, and/or to do a seminar (that’s still training). That time period was really intense. However, now that I have so much free time, I don’t even know what to do with all this free time. The best way that I’ve been keeping busy is pretty much exercising every single day. I’ve pretty much been doing kettlebell workouts with my strength and conditioning coach (Mark DiSalvo) through live Instagram videos two to three times a week.  I’m also doing yoga twice a week or, in some cases, three times a week with one of my gym’s fellow instructors (Gabriella Gulfin). In addition, I’m doing calisthenics, running, and or biking every single day. I’m actually in pretty decent shape given all the circumstances (all the shutdowns due to the COVID-19 pandemic). However, I definitely miss the mats a lot.

When the government begins to allow for more activities and things begin to open up, what will be your next step? Do you have any competitions or goals in mind? What’s next for Alex?

A lot of people are saying that they’re ready for things to get back to normal. However, I don’t think that there will be anything remotely like how we had before. It’s only been a few months, but I think that everything is going to be changing. For example, I know that they prohibiting large gatherings.  Therefore, putting together a tournament or a super fight will be quite difficult, especially in New York or somewhere around here (N.J. or C.T.). I know that they are having some fights in other states. I think as a martial artist it’s not like an on and off switch. It’s something that is definitely with you. I’m physically in pretty good condition now. When it’s time to train again, I’ll be the first one on the mat and probably the first one rolling with our students and partners. I’ll keep my eyes open. Hopefully, tournaments are coming up like RISE and so forth are able to resume normal operations, I would love to jump in there. I would love to fuel that fire and excitement again.

The UFC and other organizations were able to hold some fights with the absence of an audience and just had the fighters, coaches, and etc. How would you feel if a tournament was to do the same thing and offered you a fight? Would you be opened to that concept?

Absolutely. Actually, I feel a little uncomfortable (in reference to large crowds). I’m a private person. I’m doing social media, interviews, and public appearances because I feel that it’s necessary for the business. It necessary for the exposure of my gym. However, I’m actually a private person. I feel almost uncomfortable in large crowds. Whenever I fight on stage, like the RISE, I don’t look at the crowd. I kind of zone off.  When I do face the crowd, I look past them. So in actuality, I would feel even more comfortable with less people around. If more people tuned in virtually (Via streaming), it would actually be better for all of us.

If given the green light to reopen your gym immediately, do you have any apprehensions or nervousness? what steps or phases will you put in place to ensure the safety of your instructors and students?

Yes. I’m very nervous about it because of the wellbeing, comfort, and health of people are much more important than training jiu-jitsu. This is coming from a person whose whole life is jiu-jitsu. In a sharp contrast prior to shutting down, I was telling our students that I will never shutdown. I was even saying that the gym will shut down over my dead body. I was talking a lot of smack, and I really believed what I was saying with all my heart. However, when I started seeing people getting sick, and how serious things were getting, how people were getting uncomfortable and scared, I did a little reflection. I spoke to my partner (Van Allen Flores), and we made the decision to do what we did (as everybody else did). However, I have a friend (Greg Sirico of Odyssey BJJ, Atlanta, Ga.) who has plans on opening up that I would like to follow. He plans on having different groups. One group would be for people with one training partner and they would have a designated space on the mat. That would be the only person that they would drill and roll with. The class would be limited in size and capacity based on the mat space. In addition, he plans on assessing the comfort level of his students and making decisions based on that.  Also, as a precaution, he plans on interviewing the individuals to find out if they had the virus(COVID-19) or came into contact with individuals who did. I think it is a great idea and I’m looking forward to hearing how it goes. The main thing is keeping everyone safe and comfortable. I hope we can ensure that everyone can return to the mat safely.

On a personal and spiritual level, are there things that you are doing during this crisis that falls along the line of self-improvement? Any retrospective activities? Is there a book that you may be in the process of reading?

Is there one thing or a message that you want to share?

To me, life is about self-improvement and self-development. I think that we have to look internally to ourselves, and ask ourselves challenging questions. We have to look at ourselves to be the change in the world and to change ourselves for the better. I think that there are many avenues that one can take and that one should take in order to achieve that goal. In addition, I think that martial arts is one of the best avenues for success. A lot of people, when they start any martial art, they start it for various reasons, but mostly for self-defense. I think one of the best thing about martial art is that it goes beyond self-defense. It is the journey of self-improvement and growing as a person through many levels.  If you approach martial art with that kind of mindset, not only will it make you a better person, but it will also make a better martial artist; they go hand in hand. In my opinion, if you start martial art for some wrong reason or with negative intentions, you are going to end up quitting, becoming resentful, or whatever. I think it is very important to look at the big picture and not look at, ‘I’m going to get this medal or I’m going to get this belt or I’m going to lose ten pounds or whatever.’ I think it is much more than that. I think the people with the right kind of understanding can go really, really far.